The senator for the National Party, Graciela Bianchi, is an assiduous user of Twitter, where she writes dozens of times a day, every day, practically at any time.

On the afternoon of this April 2, at 4:00 p.m., the nationalist legislator shared an image in which you can see a photograph of the president, Luis Lacalle Pou, with a legend that reads: “According to the UN, he is the best president of Latin America and the 5th of the world”.

And he adds: “Give me a ballot box and I will vote for him again!!!”. To this, Bianchi added a personal comment: “Now we are back on the path that Uruguay should never have abandoned.”

Bianchi did not take the time to do a bit of searching on the internet, since this news is false and circulated in December 2021.

Now we are back on the path that Uruguay should never have abandoned. pic.twitter.com/nxVExLqoDg

At the time, the fake news verification portal Factual AFPof the recognized Agence France-Presse, did a search for the supposed ranking on the web pages of the UN and decentralized organizations that belong to it. Mentions of Lacalle were found in a video conference of the World Health Organization (WHO) of May 26, 2020; at overall profile of Uruguay on the Unesco website, and in some articles of the UN and the International Labor Organization (ILO) published in 2020 and the general Assembly in 2021.

But no evidence was found that the supposed ranking of world presidents existed.

It is not the first time that these types of falsehoods have been put into circulation trying to praise Lacalle Pou: in July 2020 another hoax had traveled the social networks in which it was stated that he was the best president in Latin America. At that time, the news agency had consulted the resident coordinator of the United Nations in Uruguay, Mireia Villar, who had said: “None of this is factual” and “the UN does not rank presidents or give recognition of this type” .

LARED21 also shared an article denying this fake news, which you can read here: 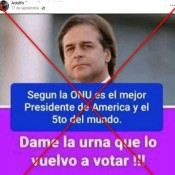 Fake News: Lacalle Pou is not the 5th best president of the UN because the ranking does not exist

In recent days, an alleged ranking of presidents in the…

Screenshot: Twitter The senator for the National Party, Graciela Bianchi,

This Saturday, the Attorney General of the Republic, Tarek William

+Prices Care is renewed: there will be products for local businesses

Photo: Pablo Añeli The Secretary of Domestic Trade will renew

Ignacio Zuasnabar: “It seems that the referendum was the day after the ballot”