The senator for the Cabildo Abierto party, Guillermo Domenech, questioned public education, assuring that “Marxism-Leninism” has spread in this area, echoing similar manifestations of his co-religionists Raúl Lozano and Guido Manini Ríos, and of the Senator for the National Party, Graciela Bianchi.

They all believe that the judicial system is “infiltrated,” as Bianchi said, by the Broad Front and the Uruguayan left. According to the newspaper The Observer, the Open Council leadership believes that it is an “open secret” what the nationalist legislator asserted.

“There is no political asepsis, the parties vote for the judges who believe that they are closer to their political position,” Domenech told the newspaper.

“It is clear that Justice sometimes makes mistakes and sometimes does not act as it is understood that it has to act. We can focus on the prosecutors, but ultimately it is part of the whole process “, were the words of Manini Ríos. “We have denounced it over and over again, we have had problems reporting the bias and the things we have seen lead us to think that there is a certain intentionality. I remember that prosecutor who lost a pendrive at the time of accusing hierarchies of the Montevideo Intendance. Things that have happened that make us think that many times there is a certain intentionality and it does not get to the bottom, “added the ultraconservative legislator in the same space on Twitter where Bianchi’s assertions emerged.

The ultra-conservative senator not only stands by her words, but has dedicated herself to responding to dozens of tweets that question what she said. The journalist and director of Uypress Y BinnacleEsteban Valenti wrote on Twitter: “Political fanaticism is negative and above all DANGEROUS. Graciela Bianchi attacked the Judiciary. The Prosecutors, the University of the Republic is a real danger for national politics ”.

To this, Bianchi replied: “I am not answering you because I am too many people not to remember that you lost a child; the worst that can happen to a human being. But always remember who I am: I am worth more for what I remain silent than for what I speak ”. “Don’t put something as personal as what happened to me with my son and my brother in a political controversy,” Valenti responded. 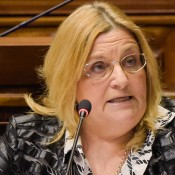 The PN in silence and the PC against

The National Party has decided to remain silent and does not endorse or condemn Bianchi’s statements. Asked by the media, some did not respond because they are on vacation, and others “did not know” enough to issue criteria.

Jorge Gandini and Gustavo Penadés and deputy Sebastián Andújar refused to issue opinions, the same position as that of the president of the PN, Pablo Iturralde.

Senator Sebastián da Silva knows that “it is not the first time” that Bianchi speaks in this way, but he remarked that within the party “everyone is free” to say whatever they want, not without underlining that “in Uruguay the separation of powers is sacramental ”.

The stores of the Colorado Party have distanced themselves from this type of questioning of democratic institutions; such is the case of Senator Conrado Rodríguez, who asserted that he “does not share” what was stated by his nationalist colleague. For him, “the value of Justice is something that must be defended at all costs”, apart from the fact that he has not seen evidence that such a thing as an “infiltration” is taking place.

“Justice was always independent in Uruguay (and) the separation of powers in this country is a fact,” replied Germán Coutinho.

In a similar place, the Minister of Labor and president of the Independent Party, Pablo Mieres, took a position, tweeting: “Total support and confidence in the Judiciary and its magistrates. They are a guarantee of the republican democratic system of our country ”.

The United States government boasted this Friday of being the

Next Monday, April 11, the shrimp ban will end and

Cabandié confirmed resources for works that will value protected areas

(Photo Ministry of Environment) The Minister of the Environment, Juan

In the middle of the Sacta case, Del Castillo excuses himself from presenting a report in the Legislative

Page Seven Digital In the midst of the controversy over

Watch out for the scene: the police detain and search the Three Wise Men

According to information provided by the Ministry of Public Health (MSP), today 6,175 tests were carried

Rodolfo Pereyra took over as Chief of the Defense Staff

The Minister of National Defense, Javier García, on behalf of the Executive Branch, appointed Air General