The Second Temporary Supreme Prosecutor’s Office Specialized in crimes committed by Public Officials requested the Power of attorney that an appearance with restrictions be issued to the former congressman Daniel Salaverry for the alleged commission of the crimes of fraudulent embezzlement by appropriation, ideological falsehood and generic falsehood.

The Prosecutor’s Office also asked Judge Juan Carlos Checkley Soria to order the provision of an economic guarantee of S / 50 thousandbased on articles 287, 288 and 289 of the Constitution.

LOOK: Study for free: Here are the 23 public institutes in Metropolitan Lima where you can

As it is recalled, the former prosecutor of the Nation Pablo Sánchez initiated a preparatory investigation against the former parliamentarian, who is credited with having appropriated the money given by the General Directorate of Congress Administration for his activities during the week of representationbut which supposedly were not made in January and February 2017.

In addition to this, it is accused Daniel Salaverry of having submitted fraudulent reports to support alleged activities that he would have carried out during the week of representation in the months of January, February, November and December 2017, as well as January, February and March 2018.

Likewise, last April the Congress of the Republic approved the constitutional complaint against him for the same case. 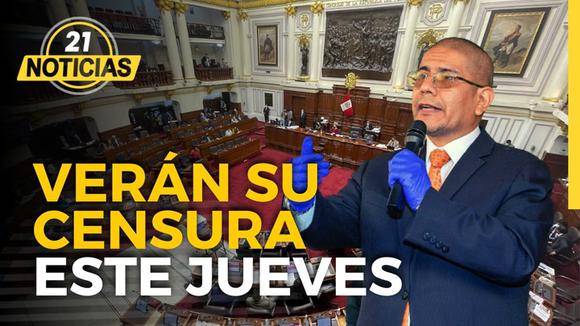 This Thursday Congress will see censorship against the Minister of the Interior after the scandal of the escape of Juan Silva. In addition, PJ arranges to summon Alejandro Toledo as a witness in a money laundering trial on August 22. Also, those under investigation threaten freedom of expression, pronouncement of Ipys. And, there are already three cases of monkeypox in our country.

Abel Martínez: current government has led us to a macabre setback

Santo Domingo Norte – The presidential candidate for the Dominican

The police arrested in Salto 19 people after various operations

The complainants assure that the company says that 500 workers

Abel Martínez: current government has led us to a macabre setback

Pedro Castillo on the request to resign from Peru Libre: “In the next few hours I will give an answer”

Several people are injured on Av. Vidaurrázaga, after the collapse of the metallic structure of an

Nine are currently for sale. types of gasoline and gasohol in Peru, but as of January

The Minister of Justice and Human Rights, Felix Cheroruled on the communiqué from Peru Libre where