Mexican actors Kate del Castillo, Eugenio Derbez and his wife Alessandra Rosaldo met with Queen Letizia of Spain in Los Angeles for the inauguration of the Instituto Cervantes in that city.

The artists were some of the celebrities invited to the opening of the center in the American city, which was headed by the wife of King Felipe VI, who traveled from Spain for her last international act of 2022 and thus get ready for Christmas and New Year with his family.

“A true honor to have been invited to the inauguration of the Instituto Cervantes in Los Angeles with the presence of HM Queen Letizia. It was extremely important to have in this city, the second in the world in terms of Spanish-speaking population, an Institute for the promotion, dissemination and teaching of our Spanish language’, Rosaldo wrote to accompany a series of photographs of their meeting,

The act was very symbolic for the Latino community, in addition to the fact that Letizia stayed for a long time talking with Kate del Castillo, as can be seen in a video that circulates on social networks.

The Mexican recently released the third installment of the series “La reina del Sur”, for which the meeting has given reason to call it “Clash of Queens”.

In addition to her encounter with the Latin stars, Letizia stole attention for her outfit, as she chose a white dress with an opening on the leg, a design by Roberto Toretta that she has worn on several occasions, and which she combined with a camel jacket from Carolina Herrera. 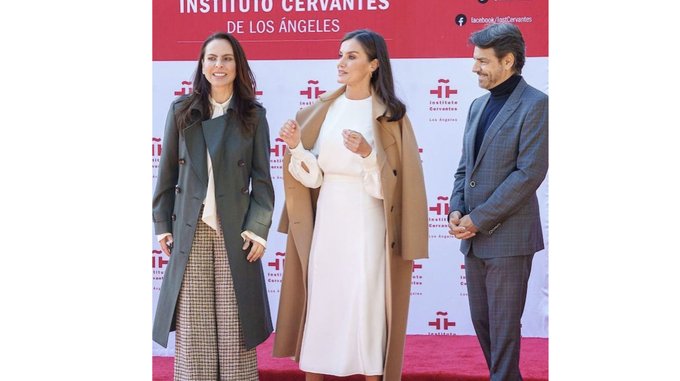 Flag of the Republic of Türkiye. Photo: UNsplash The government

The National Limited Telephone Company of Venezuela (Cantv) made progress

Outsourced workers cut off access to Aeroparque for two hours

The outsourced workers ask to be summoned by the Ministry

Nicaragua reaches a new record in the income of family remittances

The Christmas tree, a pagan tradition adopted by Christianity