The National Institute of Civil Defense (Indeci) reported that 121 districts of the jungle are at risk of landslides, huaicos or other types of mass movements, as a result of the rains forecast by the Senamhi (National Service of Meteorology and Hydrology of Peru). ), from Wednesday 4 to Friday 6 May. This was reported by the National Center for Disaster Risk Estimation, Prevention and Reduction (Cenepred).

San Martín, with 16 districts, is the region with the largest number of jurisdictions at risk”very high”, followed by Amazonas (4), Cajamarca (4), Pasco (3), Huánuco (1) and Loreto (1). Likewise, a total of 92 districts of those same districts, in addition to Cusco, Junín and Ucayali, are at risk “high” of being affected by this type of emergency.

In total, the San Martín region is the most compromised with 53 districts at risk.

The images also show how the waters drag a citizen’s motorcycle on a central avenue.

Faced with this situation, Indeci urges the local and/or regional government authorities to inform the population about evacuation routes, safe areas and meeting points, as well as the availability of health centers, fire companies and police stations in case of an emergency.

It also recommends that the population identify evacuation routes that lead them to a high, safe area, away from riverbeds and/or streams, because landslides and mudslides may occur. Also protect and reinforce the roof of their homes, establish an early warning system using whistles, bells, alarms, sirens or loudspeakers, in coordination with local authorities.

121 jungle districts at risk of emergencies due to rains. More information ⤵️https://t.co/4yUPG2gX68 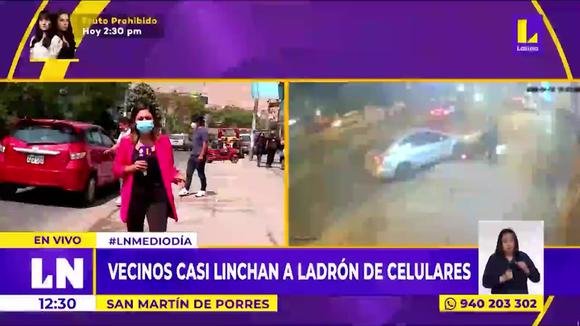 Indeci alert: 121 jungle districts at risk of landslides due to heavy rains (VIDEO)

The National Institute of Civil Defense (Indeci) reported that 121

Ensures in two months it would finish SDO roads

The Minister of Public Works and Communications, Deligne Ascención, promised

The request to remove VAT from 19 foods was approved in the Senate. A price agreement will also be sought.

Photo: Pexels This Tuesday, a formal request from the Executive

Ensures in two months it would finish SDO roads

Mother’s Day: online sales would grow by 50% in this campaign, estimates the CCL

Pasión Dávila on the withdrawal of the proposal to cut mandates: “I will continue to insist”

Plenary session of the Congress of the Republic meets this Tuesday, May 3

The head of the Board of Directors, Maria del Carmen Alva, summoned for this Tuesday, May

Junín: Femicide comes out of hiding to look for water and is captured after intense persecution

Updated on 05/03/2022 12:45 pm The Supervisory Agency for Investment in Energy and Mining (Osinergmin) published