Carlos Herrera Descalzi, former Minister of Energy and Mines (Minem), in dialogue with Peru21.TV, gave scopes of the “requirements to be president of Perupetro”Stipulated in the statutes of the State Private Law Company, which, on behalf of the Peruvian State, is in charge of promoting, negotiating, signing and supervising contracts for the exploration and exploitation of hydrocarbons in Peru, for which Daniel salaverry “does not qualify”.

How do you take the appointment of Daniel Salaverry as president of the Perupetro board of directors?

Sounds like a political designation to me. He does not meet by far the requirements to be president of a private company like Perupetro. Does not qualify. The Perupetro Statute stipulates that to be a member of the board of directors it is necessary to have recognized –that is, accepted by someone– technical capacity in the matter to be performed, in this case it is hydrocarbons. That is, you must be an expert.

Salaverry has studies in Architecture. Why should you necessarily be an expert on the subject?

Because it is in charge of delivering concessions and negotiating oil contracts, for that you have to be an expert. Perupetro calls on investors, presidents or managers who know about hydrocarbons, so that large capital companies invest in Peru. At these meetings, which are in English –because that is the level of international demand we have– the investors ask to speak with the highest authority in Perupetro, and they assume that it is a person who knows about the subject; so far Peru has been well represented. The question is, can we continue like this?

LOOK: Daniel Salaverry: Comptroller’s Office announces that it will verify compliance with requirements in the appointment of the new head of Perupetro

The former Minister of Energy and Mines expressed his concern at the “political appointment” of Daniel Salaverry as president of Perupetro, the entity that would be in charge of renegotiating the Camisea contracts.

Would Salaverry have the task in Perupetro to renegotiate Camisea?

If the Camisea contract would have to be renegotiated, it is with Perupetro. But there are other peculiarities: Perupetro, just as it can compete for lots, has the power to negotiate them directly, and in these negotiations royalties and economic agreements are set. How would you negotiate if you don’t understand the contract, the terms and conditions? Take a look at what we’re talking about.

Is Salaverry able to understand those contracts?

I do not doubt your intellectual capacity, but it requires knowledge in hydrocarbons. This is not won overnight. 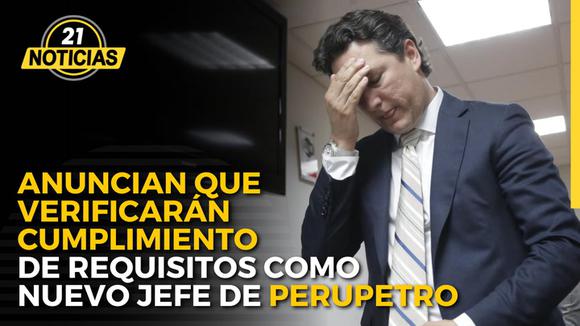 From this Wednesday the counterflow begins on Las Américas Avenue

Starting this Wednesday, April 6, there will be a counterflow

The CEO of open bankPatricia Benito, revealed that the digital

Hugo Fleitas, governor of Cordillera for the Liberal Party (PLRA),

The country lost S / 1,000 million in a day of mandatory immobility

On Monday night, the President Pedro Castillo surprised the announced

The country lost S / 1,000 million in a day of mandatory immobility

On Monday night, the President Pedro Castillo surprised the announced country curfew, from 2 am to

Minister of Justice: “There are important agreements that mark the consensus between the Executive and the Legislative”

Regions maintain protests against the Government of Pedro Castillo

Region Correspondents The tension remains in various regions of the country. government announcements they have not

Cusco: veterinary catches fire and pets perish despite the efforts of firefighters (VIDEO)

Last Tuesday afternoon a large fire was recorded in the district of Wanchaq – Cusco, where

Midagri: “we work in dialogue with national unions and small producers”

Updated on 04/05/2022 08:36 pm The Minister of Agrarian Development and Irrigation From Peru, Oscar Zeaassured