They call themselves “The Idealists”, and they represent a racist, xenophobic, guerrilla and extreme right position. They are the ultranationalist group gray wolves and they greet each other with the hand raising the index finger and the little finger while bringing the thumb together with the remaining two fingers, suggesting the head of a wolf.

That greeting with the hand, linked to this group considered terrorist in some countries, has been the bone of contention after the Turkish foreign minister, Mevlüt Çavuşoğludid it through the window of his truck in front of Armenian protestersafter meeting with his Uruguayan counterpart, Francisco Bustillo.

the portal of The Daily consigns that The diplomat had a big smile as he made the gesture of the Gray Wolves, provoking the anger of those present and indignation on social networks.

The Bozkurtlaras they are called in Turkish, were founded in 1968 and have been linked from the beginning to the Nationalist Action party, with an extreme right-wing, ultra-conservative and ultra-nationalist position, and are currently one of the groups that support President Recep Tayyip Erdogan, whose chancellor was precisely the who visited Uruguay on Saturday.

The name of this group refers to the she-wolf Asena, “mother of all Turks” according to local mythology, and they have carried out hundreds of murders of leftist, communist, Kurdish and Armenian separatist militants, as reported by The country from Spain.

In France, they were banned after repeated acts of violence in which they were protagonists: at the end of October 2020, the security forces had to intervene in a coordinated act of aggression against Armenians. This was reported at the time RFI.

In 1981, one of its active members tried to assassinate Pope John Paul II in Saint Peter’s Square. 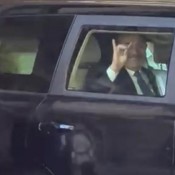 The senator of the Broad Front Liliam Kechichian will summon the chancellor, Francisco…

In the past they were seen operating under the acronym TIT, which in Turkish translates as Turkish Vengeance Brigade, or ETKO, the acronym for the Army for the Release of Turkish Captives, during the 1970s and 1980s, agitated and stirred to the bicontinental country, and that led to the emergence of the Bozkurtlar who wanted to fight the communist sectors.

The extreme violence, poverty and paralysis of the State led to the military coup in 1980.

Already in 1985 they had been described as terrorists, as published at that time the Spanish newspaper El País. In 2021, the same newspaper wrote that “the Gray Wolves were involved in a multitude of political assassinations and massacres such as those of Maras in 1978, with 120 dead, and Çorum, in 1980, with 57 dead. The party, explains the journalist Kemal Can, obtained its support from rural areas and small towns and from identifying itself as ‘the party that defends the State’ against external and internal enemies: in fact, its militants were used in clandestine operations in Europe by obscure elements of the Turkish state, and one of its militants, Ali Agca, attacked Pope John Paul II in 1981”. 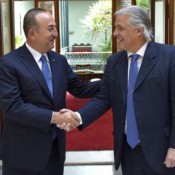 The Minister of Foreign Affairs, Francisco Bustillo, decided to summon the ambassador of…

Between 1915 and 1923, the nationalist Committee of Union and Progress, self-styled Young Turks, of the then Ottoman Empire, promoted and perpetrated an attempt to exterminate the Armenian culture.

Various calculations state that between 1,500,000 and 2,000,000 Armenian civilians were persecuted and killed in what they call The Great Crime.

Regarding the Armenian Genocide, the Gray Wolves are denialists and try to boycott any demonstration or expression that recalls this dark episode in recent history: in fact, in 2004 they managed to completely prevent the screening of the film ‘Ararat’, by the Armenian director -Canadian Atom Egoyan, feature film that narrates these events.

The news of the gesture was echoed internationally, as in the German state media DW that public: “Controversy in Uruguay over Mevlüt Çavuşoğlu’s gesture to protesters”. It was even replicated by the right-wing Turkish portal Takvim, which wrote that there were “Armenian provocateurs”.

The Venezuelan Yorgelis Salazar won this Sunday, April 24, with

Follow the broadcast, live and direct online, of the delivery

Russian fertilizer exports that represent 40% of the world total

Mariano Arana: «They broke a tradition of our society»

The former mayor of Montevideo, Mariano Arana, spoke about the IDB credit, whose granting did not

Investing in your culture: the key to an agile organization

the of agility It is an increasingly popular concept in the organizational world. But, why is

"He left her very alone": the death of Michelle Suárez and the reaction of the PCU and trans groups