The prosecutor Jose Domingo Perez spoke out against the decision made by the Plenary of Congress this Wednesday when approving the constitutional complaint against the former prosecutor of the Nation Pedro Chávarrybut have refused to disable it from the public function.

“This is a shield, it is a term that was used at the inauguration of the judicial year 2019, that is, the protection of certain people and that we are observing it again”, he declared on Channel N

The member of the Public Ministry stressed that when Pedro Chavarry was prosecutor of the Nation had elements and evidence against Keiko Fujimori in the Cocktails case, he hid them.

“(The ex-prosecutor Chávarry had elements that he hid and that were evidence against Fujimori?) This is what has been proven in Congress by having approved the constitutional accusation regarding the crime of real cover-up and personal cover-up. It is an objective situation that will have to continue the corresponding processing”, Indian.

In this sense, Domingo Pérez asserted that Chávarry’s protection of Fujimori meant that the Lava Jato Special Team could not advance quickly, as they had proposed. Therefore, he highlighted that the actions of the former prosecutor of the Nation served to protect the interests of those investigated.

Next, the prosecutor explained that Fujimori Higuchi’s defense is going to try to get the case to the Constitutional Court.

“This case is not only going to conclude in a trial in the first instance, it is going to reach the Appeals Chamber, the Supreme Court and what they are trying to do is for this to reach the Constitutional Court“, said.

Jose Domingo Perez expressed his concern, since one of the new magistrates of the Constitutional Court (TC) is Luis Gutierrez Ticsewho previously revealed his position regarding the accusation against the leader of Fuerza Popular.

“There is a legitimate concern there because one of the magistrates of the TC is Luis Gutiérrez Ticse and he pointed out in 2020 that I am -or was- a government agent. He said in these terms: ‘tomorrow the correlation of power may vary and in this perverse system, it could be said that prosecutor Pérez has organized a criminal event to exonerate Odebrecht‘”, held. 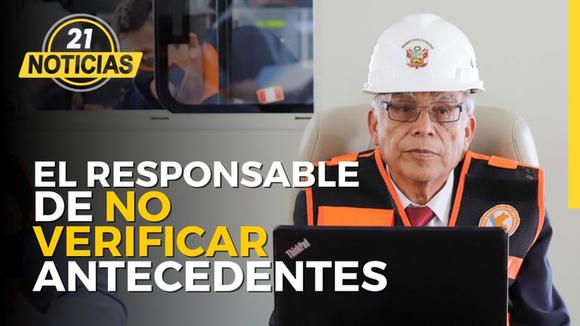 Prime Minister Aníbal Torres is responsible for NOT HAVING VERIFIED THE CRIMINAL RECORDS of the new Minister of Agrarian Development and Irrigation. In addition, he will denounce the constitutional complaint against Boluarte soon in the Subcommittee on Constitutional Accusations. Also, Dina Boluarte accepts that she signed documents from the Departmental Club of Apurímac. And, South Korean group BTS denounces racism against Asians at the White House.

The prosecutor Jose Domingo Perez spoke out against the decision

The president of the Republic, Louis Abinaderappointed retired major general

Maduro only wants “peace and cooperation” with Colombia: “Whoever wins the elections”

President Nicolás Maduro demanded that the head of the communal

Specialists from the Decentralized Directorate of Culture of Cusco, on behalf of the Ministry of Culture,

OEFA fines Repsol S/ 460,000 for failing to rescue wildlife from the oil spill

Updated on 06/01/2022 07:28 pm The Agency for Environmental Assessment and Enforcement (OEFA) imposed a sixth

La Tinka this Wednesday, June 1: How to participate?

This Wednesday, June 1, the draw for The Tinkawhere a lucky person could have won the