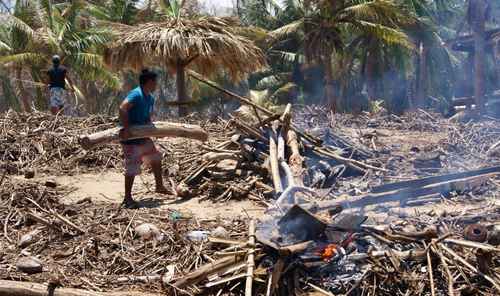 ▲ Electoral authorities in Oaxaca called to restore communication in isolated localities after the passage of the hurricane Agathe. The image, in Zipolite.Darkroom Photo

Oaxaca, Oax., The main characters in the dispute over the governorship are Salomón Jara, who emerged from the Democratic Peasant Union –dedicated in its origins to blockades to demand resources–, and Alejandro Avilés, a low-profile politician close to Ulises Ruiz and imposed as a candidate by the national leader of the Institutional Revolutionary Party (PRI), Alejandro Moreno Cárdenas.

Unlike other states, and in a decision that caused suspicion among PRI members, wing rejected an alliance with Acción Nacional (PAN). In addition, Natividad Díaz Jiménez, who controls the party in the entity, remained a PAN candidate until the end, despite the fact that various representatives of the tricolor and Avilés himself demanded that she decline. There would have to be a very good negotiationsaid the applicant in a declarative slip during a press conference, just on May 26.

The history of the imposition of Avilés is widely told in Oaxaca. One of the two applicants was Francisco Ángel Villarreal, former director of the State Institute of Public Education of Oaxaca, and who is publicly granted attention to the demands of the teaching profession, in contrast to the six-year terms of Ulises Ruiz and Gabino Cué. Germán Espinosa Santibáñez, former Secretary of Administration, was also included.

One day before making the decision, both were summoned by wing to the national headquarters of the PRI. When they arrived, Avilés was already in the office, then coordinator of the PRI caucus in the State Congress and who was dismissed from his position as Secretary of Government at the beginning of the current administration, when it was detected that, to vacation in Puerto Escondido, one of his sons used an official helicopter as an air taxi.

Jara, meanwhile, joined the movement of Andrés Manuel López Obrador since the 2005 pre-campaign, when he was a local deputy for the Party of the Democratic Revolution. At Jara’s request, the photographer Tomás Martínez presented them on November 18 of that year, after a rally by the former head of the capital’s government in Huajuapan de León.

The licensed senator, however, faces a division in Morena, which was accentuated when the leadership left Senator Susana Harp out of the competition, and has politicians such as Samuel Gurrión Matías among his campaign team, who has jumped all over the parties. One of his sympathizers is Beatriz Rodríguez Casasnovas, former head of Tourism in the six-year term of Ulises Ruiz.

This Friday, on the eve of the election, the electoral authorities called for communication to be restored in the populations isolated by the hurricane, beyond the process. Agatheas well as the resolution of three roadblocks that can lead to conflict points that complicate the collection of electoral packages.

PRI and Morena, in the final stretch for Oaxaca

▲ Electoral authorities in Oaxaca called to restore communication in

The match was complicated for Ciclón de Boedo when Leandro

Commission is not yet collected for products with zero rate

The Minister of Industry, Commerce and MSMEs, Víctor (Ito) Bisonó,

100 days after the war, more than 60 Ukrainians remain refugees in CDMX

During the first days, the Ukrainian community in Mexico carried out different mobilizations, some in the

PayPal gives you the keys to defend yourself from cyberattacks

Mexico ranked first in attempts of this type of threat in Latin America, during 2021, according

Formal employment has managed to advance strongly in the last two years, going from having 20.7

The complaints against Alito, in the preliminary phase: Córdova

#GuestColumn | Gun culture in the US: limits and possibilities

However, beyond the debates, the data is dramatic. Each year more than 40,000 people die from