Last Monday afternoon, eight buses full of policemen left Cusco bound for Apurímac, to the area adjacent to the Las Bambas mine, where for two weeks, community members from Fuerabamba have been on land belonging to the private company, in the middle of a demonstration for alleged breaches by the mining company.

Thus, some 250 troops belonging to the Special Services Unit – USE and Kallpas, they left in a caravan carrying their riot gear; In statements by PNP General Pedro Villanueva, head of the VII Cusco Police Region, the law enforcement officers comply with orders issued by their superiors for a possible eviction of the residents.

“We have received an order from the high command for personnel from the Cusco Region to move to Apurímac, Las Bambas, Let’s see if the extrajudicial possessory defense of the mine, which has been invaded by community members from Fuerabamba, will be carried out.”, referred.

It should be noted that the agents from Cusco will join other contingents from the Arequipa and Apurímac regions, the latter will be in charge of operations in the area due to a matter of jurisdiction.

COMMONERS DO NOT GIVE IN.

in conversation with MailEdison Vargas, president of the Fuerabamba peasant community, pointed out emphatically that they do not care about the arrival of police troops, and that they will remain in the place they have occupied until their demands are met.

“Right now we are calm. but if they bother us we will give everything. Now we find 700 people settled in this place, we are not going to give up until the mining company and the Government listen to us”, he quoted.

He recalled that they returned to ‘position themselves’ on their old lands after having problems with the communities of Chila and Choaquire, whom they accuse of invading their lands in the vicinity of Nueva Fuerabamba and not letting their cattle graze, for which they demand from the mine the purchase of 180 hectares of land exactly for this purpose.

About the individual from MMG Las Bambas they indicated that there is a commitment to purchase this land for grazing and cultivationHowever, this had to go through a purchase commission made up of the mining company and the community, which they accuse of not having formalized this commission, so the purchase was delayed until today.

– Due to this panorama from the mining company they confirmed the cessation of operations of MMG Las Bambas since April 20 due to the climate of conflict around the camp, a fact that would mean the loss of more than one million soles per day to the national treasury for royalties. 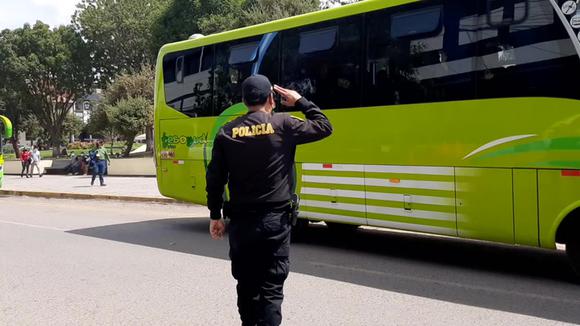 Minister of Foreign Affairs of Turkey, Mevlüt Çavuşoğlu, making a

The National Directorate for Drug Control and the Navy of

MTC: works at Piura airport will require an investment of US$ 36 million

Congressman José Balcázar: Government would have “Plan B” if the Constituent Assembly proposal does not reach the Plenary

Pedro Castillo LIVE: President will travel to Ecuador this Friday 29 to participate in official activity

Passport: What will the process be like without appointments to obtain the document from September?

The National Superintendent of Migrations, Jorge Fernández Campos, reported this Tuesday that from September of this