The President of the Republic, Luis Lacalle Pou, spoke this Friday from Maldonado about everything that is now known about the case of Alejandro Astesiano, his former custodian who is allegedly part of an illicit business of selling false passports to people of Russian nationality.

The president has said, first, that Astesiano did not have a criminal record, and then that he did. Later, the Ministry of the Interior affirmed in a statement that the file with all the information of the former custodian had been adulterated; that when it arrived at the hands of the president he did not show the convictions and indictments but that they appeared “surprisingly” now in 2022.

“I’m not lying, I’m telling you the truth”, responded Lacalle at a press conference in Maldonado, where he attended the inauguration of the offices of the Pilot Plan for the Prevention and Treatment of Addictions, an event attended by local authorities, such as Mayor Enrique Antía. “I can be wrong, but I’m not lying. They will not have a president who lies. That you can be wrong, yes, but not lie. I was not informedLacalle added.

On Tuesday, Astesiano was charged with three crimes of fraud, association to commit a crime and simulation of marital status, that is, falsification of documents.

He was dismissed by Lacalle Pou only on Thursday after publicly accepting that he knew of the dozens of police investigations that weighed on his custodian.

Although Lacalle insists that he was never informed of some things, it is known that in 2013 he was prosecuted for four months in prison. The background, says the Presidency, did not appear in the file that reached said instance, but now in 2022 they are. 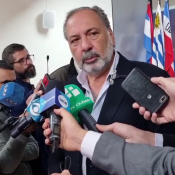 Astesiano case: Gandini criticized that “a criminal organization was set up in the heart of the government”

Gandinir called for self-criticism and more stringency in the security of the Executive Tower.

The former Director General of Consular Affairs and Liaison of

Charallave merchants protest against the increase in municipal taxes

Hailstorm, rains and winds affect the municipality of Santiago

The former Director General of Consular Affairs and Liaison of the Foreign Ministry, Pauline DaviesI know

César Vega was scammed by an Alfonso Lereté impostor: he lost US$3,000

Early this Wednesday, December 28, there was a fatal fire in a family home located on

The commercialization and use of sound pyrotechnics is prohibited in the department of Colonia. During the