The President of the Republic, Luis Lacalle Pou, defined the preliminary draft of the Social Security Reform Law as “sustainable, and supportive”, remarking that it covers all subsystems, including the Military Fund, and said that it is “very gradual because the transition is 20 years”.

However, the Secretary of Press and Propaganda of ATSS, Karina Sosa, stated that “it is not a sustainable, supportive or gradual project, since it is not stated, in numbers, what the savings would be, nor what the benefit would be. for the workers”.

Sosa indicated, in reference to the sustainability that the government argues, that the starting point to define things are the laws and in this case the Constitution of the Republic, in which the form of financing of social security is expressed. “We cannot measure in terms of sustainability or unsustainability something that, out of duty and commitment, and because it is a fundamental human right, governments have an obligation to comply with.”

In reference to the fact that the government defined the initiative as “solidarity”, he questioned that “this is precisely the pillar that the project attacks in a more regressive way”.

He added: “Being supportive means that what I have I share with the rest; however, this project shows that the deepening of the AFAPS, which in our opinion is the worst problem that Uruguayan social security has in terms of financing, is something that takes away that solidarity pillar, given that it applies the theory of ‘save yourself who can’ and ‘he who pays more charges more’. They are condemning the workers to be affiliated with an AFAP regardless of the contribution scheme that it has, whether it is a state or para-state fund”.

The union leader told LARED21 that, “in addition, it is done from a much higher calculation base, before the starting point was 71 thousand pesos at January 2022 values; however, now it is from zero to 134 thousand pesos. Then, the AFAP would take half of the worker’s contribution directly from zero weight “.

The representative of ATSS pointed out that “it is not an ideal reform, because the most vulnerable worker does not improve his real income in concrete terms.”

“Although we understand that the reform is gradual, we also consider that it is a very perverse mechanism for the purposes of raising it with public opinion, because the most serious issues that social security issues have are their complexity for the understanding of the population in question. overall,” he said.

He indicated that when expressing that it is “very gradual” it is true, but gradual because it has been applied since 1967. “The problem is that all the reforms are gradual, because no social security reform is applied and immediately generates results, we have to wait for them to generate retirement cause for those who are still active in the labor market”.

“We do not agree with the initiative, because the President of the Republic, Luis Lacalle Pou, should fulfill his campaign promises, when he said that the rules of the game would not be changed for those people who were already immersed in the labor field. Therefore, not only should he comply with and respect what he said, but it would be a sign of good faith for the population that no distinctions be made between workers, ”he said.

In this sense, he questioned that in the project only two groups of workers are named who will be able to retire at 60 years of age, that is, those who carry out risky jobs due to their nature and impact on the physical conditions of human health. In addition, other activities that should request access to this benefit through a more complex mechanism are not taken into account.

“Nobody should work beyond 60 years of age, which already seems like a high number, because workers must have time to enjoy their lives and not go from the workplace to retirement or retirement, already with health problems, without to be able to have the possibility of expanding as people, without restrictions in the cultural, rest and enjoyment planes”, he remarked.

With the proposal to increase the retirement age “80% of the country does not agree, because the Committee of Experts conducted a survey and the Uruguayan citizen said that he did not want to work beyond 60 years.”

The project also includes a chapter referring to the “early retirement cause for an extensive work career.” In reference to those people born after 1970, who at the age of 60 have 40 effective years of work or more, he said that he refers to the “non-dependents”, that is, employers or self-employed who can be exemplified in owners of small and medium businesses. (kiosk or butcher), “generally they are not those who manage more capital, but those who work more hours daily and generate less profit, these people will have to be up to date with their contributions, because if they owe a year of contributions, they would not enjoy the benefit of being able to retire at the age of 60 despite having worked for them”.

He recalled that, according to the diagnoses of the Committee of Experts, three out of four Uruguayans were not going to be able to complete their nominated work history, which means that “only a quarter of the population could have the benefit of retiring at the age of 60, if you have 40 years of contributions; therefore, 75% would not be included in this group”.

He added that if there is an incomplete work history, these people could have been working outside the system, as it is commonly said “in black”, a situation that is sometimes accepted by the worker in order to survive, not fall into poverty or indigence, “although work is also a human right and that any government has the obligation to create jobs.”

“Although there is a differentiation between those who generate 40 years of work and those who are 60 years old, they will always be the least, because they have also had a life of secure work and constant income that have made their lives more orderly, less stressful and have had fewer needs than those people who have had to live with what they could,” Sosa pointed out.

For his part, the vice president of ATSS, Rodrigo Núñez, stated that “there is no real urgency to carry out a reform, much less one that is restrictive of some benefits and is detrimental to a better quality of life, at such particular ages when 60 years with 30 years of work”.

He recalled that ATSS, through its Social Security Commission, proposed an alternative project to the Commission of Experts.

In this sense, ATSS proposes “substantial differences in the sense of a system that is sustainable, because social security is not an expense, it is a fundamental human right, that is in tune with how the sources of financing are generated, and does not fall the weight on the workers, the self-employed and small entrepreneurs, and if it goes towards big capital, and other innovative sources where a greater burden can be applied towards social security”.

He added that in this way, it would be possible to move towards a social security “expressed in a better way, more comprehensive, deeper and that does not leave behind a contribution from the BPS that has such a wide basket of benefits that ranges from health, diseases , maternity, breastfeeding and all the benefits that have to do with life contingencies such as loss of employment or disability, among others. He added that it is important to have that vision and carry out a reform that is “sustainable not only economically, but also socially and for the population.”

On the other hand, Núñez stressed that in the last two years, the BPS has lost more than 500 workers and the contracts of interns and interns have also been drastically reduced. “Starting from a workforce that exceeded 5,100 people, we are now at 3,100 officials serving the entire country in all the areas that the BPS encompasses.”

The union leader pointed out that said lack of personnel generates a very big problem since in some places the basic functioning is being compromised.

“There are agencies in the interior of the country in which there is only one person to serve and if that person wants to use their statutory license, gets sick, or has a problem, they cannot be absent because the office would have to close,” he exemplified.

He added that in some dependencies of Montevideo a similar situation occurs. “In all areas of the BPS, personal absence is a fundamental element, because it is related to working conditions that are becoming less and less beneficial, and indirectly it is related to more delays in the different procedures.”

“It was raised by the Board of Directors of the BPS, which has made a lot of effort to enter personnel, but that the Planning and Budget Office (OPP) and the Ministry of Economy are closing the possibility of personnel entering, especially for places of the interior and to be able to occupy the vacancies”, he clarified.

Núñez recalled that since 2015, for every three people who left, two entered; whereas today the ratio is three to one.

“This is aggravated by the situation that from 2019 to 2020 the OPP proposed to withdraw 600 vacancies at once, and this year only 39 people could start working, in a contest that is in force. This leads us to state that it is not enough and we also have a priority list with people who made a very demanding contest, when the BPS could provide a solution to a problematic unemployment situation”, he stated. 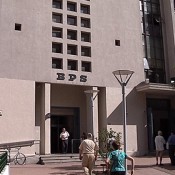 ATSS: No one should work beyond the age of 60, which already seems like a high number

The President of the Republic, Luis Lacalle Pou, defined the

The Minister of Popular Power for the Social Work Process,

Inmates tried to bring drugs into Unit 15 in a ball

Prisoners from Unit No. 15 of the National Rehabilitation Institute (INR), known as the Convent Prison

The National Institute for Children and Adolescents of Uruguay (INAU) signed, on August 2, an agreement

In which departments were the most kilos of drugs seized in 2021?

The president of the Uruguayan Football Association (AUF), Ignacio Alonso, gave an interview with 100% Deporte