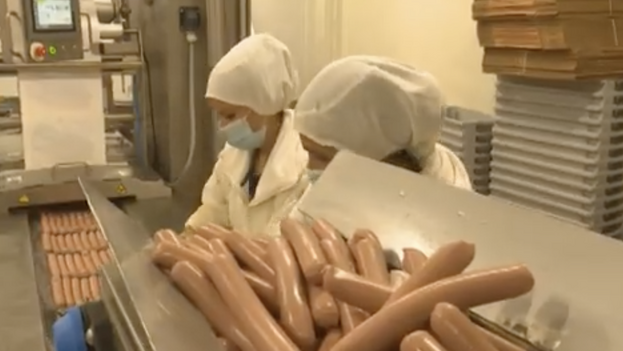 “Everything that comes out of the slaughterhouse is being swallowed by the sausage factory,” says a resident of the Kilo 12 neighborhood in Sancti Spíritus, referring to the Empresa Cárnica plant in the province. For a few days the meat has been disappearing, the man tells 14ymedio. Not even the black market, where you have to pay the price in gold, is spared from the debacle.

“Before they took out the pork legs or the pieces of meat, and one could go buy them. But that is over: it seems that it is more profitable to sell the sausage than the meat,” he insists. The sausage produced by the state company has a clear recipient and one that pays better: the hotels and the network of freely convertible currency (MLC) stores.

The man affirms that, according to a worker he knows, from the quality control area in the factory, two weeks ago a container of imported pork entered the Island. Half of the shipment was sent to the factory, which has dramatically accelerated its production since then.

Inaugurated in 2019 after an investment of 6 million dollars, the Sancti Spíritus sausage factory is the only one of its kind in Cuba. The directors of the company boast of these figures on the local television station, Centrovisión. In a report issued this Wednesdaythe workers admitted that all production is focused on meeting the demands of tourism and the shelves of the “collector” stores of MLC.

The Cubans have, if anything, the company’s “parallel manufacturing line”, which allocates its “leading product” to social consumption, although it also sells mincemeat, hamburgers and sausages

The Cubans have, if anything, the “parallel manufacturing line” of the company, which allocates its “leading product” to social consumption, although it also markets mincemeat, hamburgers and sausages. If something is left over, assured a worker, then they offer it to commercial and gastronomic establishments.

The factory facilities have the potential to produce six tons of sausages, but currently they work part-time due to the lack of spare parts for the machinery. An official, whose name was not recorded by Centrovisión, guaranteed that the necessary parts are already on the island to restore the plant’s capacity and, for now, “only” the supply of meat remains to be resolved.

Another official, also unidentified, told the channel that sausages were made with pork before, but that due to the shortage they have had to introduce new products: “They have been made with minced chicken and beef. The formulation is 50% these types of meat and 50% starches and water.

“I’ve bought them, they’re not bad. They’re better than six months ago, when they were making it with horse meat,” added the neighbor from Kilo 12 to 14ymedio. “That was hard and it was hard to eat, these are meatier.”

The Sancti Spíritus sausage factory leaves the markets without meat

“Everything that comes out of the slaughterhouse is being swallowed

The Metropolitan Prosecutor’s Office, through the Third Section of Crimes

(EFE).- The president of the Inter-American Development Bank (IDB), Mauricio Claver-Carone, accused this Thursday the government

A scene this Thursday in the central Obispo Street, in Havana, was enough to show that

On their way through Honduras to the United States, Cubans are extorted by agents of the

For 17 years, until her arrest in 2001, Ana Belén Montes, an American civil servant daughter