From Nicolás Maduro on down, institutions of the Executive Power have used public resources for the PSUV’s internal campaign that culminates this Saturday, August 20, with the election of the street bosses. According to Diosdado Cabello this week, the data collected during the election of 200 street leaders will feed the 1×10 system. The Civil Association Súmate recalls that the Law Against Corruption prohibits the use of public money to favor a political bias

The Civil Association Joinwhich has done electoral oversight since its foundation in 2002, denounced on its social networks that the United Socialist Party of Venezuela (PSUV) violates the Law Against Corruption by using state-owned media platforms to promote and make propaganda of an internal event, such as the election of 200,000 street leaders this Saturday, August 20.

In statements this week, the first vice president of the PSUV, Diosdado Cabello, explained how the process to appoint these leaders will allow them to collect detailed data from voters that will strengthen the control system called 1×10.

After the electoral process, the elected street bosses must send to the computer centers “photos of the minutes of the assembly, of the totalization act, list with identity card of the participants and number of votes obtained, in addition to the telephone number of the four most voted”, added the partisan leader, added Hair.

Today #19August the twitter account of the Ministry of Communication @Mippcivzla made 4 retweets in favor of Elections @PartidoPSUV for Street Bosses. She violated Arts. 14 and 75 of the new Law Against Corruption that prohibit the use of public resources in favor of a political bias pic.twitter.com/FKZZHjxq6F

Súmate specifies that a follow-up of the messages published by the Venezuelan Television channels (VTV) National Assembly TV (ANTV) and the radio stations Radio Nacional de Venezuela (RNV) and YVKE Mundial violate articles 14 and 75 of the Law Against Corruption what was it refurbished in march of this year.

This law establishes the prohibition of using public resources in favor of any political bias.

According to the NGO’s measurement, 28 of 335 mayors’ offices violated the ban by promoting the elections of Street Leaders on their websites and/or Twitter. The same was done by five governorates (Guárico, Aragua, Bolívar, Amazons and Lara) and the Capital District; as well as 14 of 34 ministries.

The president himself, Nicolás Maduro, has used space in the state media to promote the internal elections of the PSUV. In a message on his social networks, Maduro called on the PSUV militancy to participate in the scheduled process starting at 2:00 pm.

This is a good day! We are going to the election of the street boss, in a historical process of genuine, participatory and protagonist democracy. The base leadership, the man, the woman and the youth of the town will be elected. I’m proud of @PartidoPSUV! pic.twitter.com/z4wxJDX95d 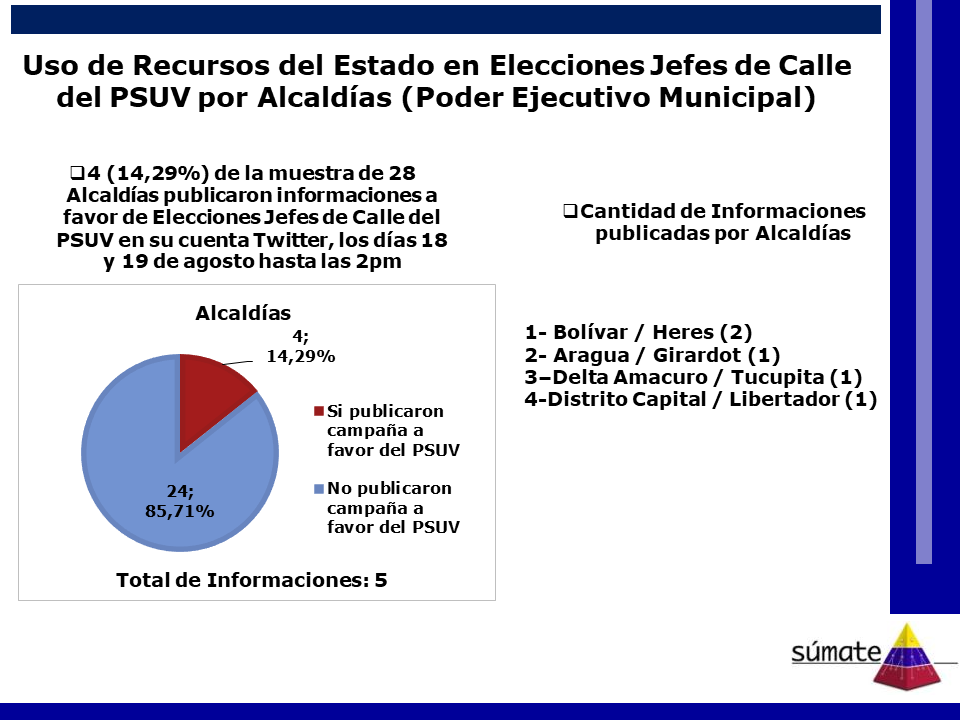 From Nicolás Maduro on down, institutions of the Executive Power

The fires They advance through the Paraná Delta and the

To honor the musician João Donato, who turned 88 last

An alleged gang of human trafficking particularly of sexual exploitation of five minors, mostly of Venezuelan

This Saturday, August 20, the United Socialist Party of Venezuela (PSUV) will elect, starting at 2:00

In the Andrés Eloy Blanco municipality, Sucre state, the auxiliary political body of the United Socialist