▲ Dulce María Sauri Riancho pointed out that with the proposal for a Secretariat for Religious Affairs in the PRI, Plutarco Elías Calles he must have turned 18 rounds in his grave.Photo Jose Carlo Gonzalez

The former president of the Institutional Revolutionary Party (PRI), Dulce María Sauri Riancho, warned that the PRI members have to go to the legal instances within their reach, including the National Electoral Institute (INE) and the court in the matter, to dispute the recent reforms to the statutes and regulations of his party, which allow prolonging the period of the national leadership headed by Alejandro Moreno Cárdenas.

These changes only cause tension at a time when the Institutional Revolutionary should be focused on building the electoral alliance for the renewal of the governorships of the state of Mexico and Coahuila, said the former president of the Chamber of Deputies and former governor of Yucatan.

Senator Beatriz Paredes, who also chaired the PRI, agreed that Any attempt to extend it, by whoever it may be, has as its essential element, as its main condition, reaching the highest degree of consensus. So, I think it is an issue that unnecessarily generates new tensions within the party..

Interviewed at the beginning of its work by the Permanent Commission of Congress, Paredes said that she was surprised by this modification to the basic documents, which creates unnecessary tension.

Sauri stressed that she is not naive and knows about the control exercised by Moreno Cárdenas, but her moral duty is to fight to stop these changes. To do this, the militants must go to the INE, despite the fact that the body endorsed the same amendment in 2020.

He recalled that the governor of Campeche, Layda Sansores, announced conversations between the president of the institute, Lorenzo Córdova, and alito Moreno, in which they talk about these statutory modifications, that they hurt the party so much and that we did not know how to defend.

Sauri explained that he did not participate in the extraordinary session of the National Political Council, which Moreno Cárdenas convened in an accelerated manner, since in just a few hours it was not possible for him to analyze the 16 changes to the statutes and twenty more to four regulations. 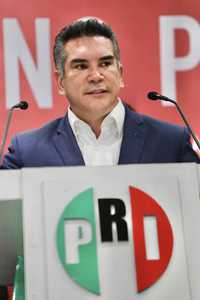 ▲ Moreno Cárdenas maneuvered to remain in the leadership of the Institutional Revolutionary until 2024.Photo Luis CastilloJosé Carlo González

The main one, he said, was the reform to article 83 section 37 of the statutes, which included an addition in which the extension of the statutory period of the national leadership is determined, in the cases in which the renewal concurs with an electoral process or within the 90 business days prior to it.

He recalled that in July 2020 this provision was introduced and what is new now are the words business days, so instead of three months of extension there are four and a half months. This would lead the current leadership to remain and have control of the electoral process, even if it begins in November –and not in September 2023– as established in the electoral reform of President Andrés Manuel López Obrador.

That is, he stressed, Moreno Cárdenas he was cured in health and he is sure that this reform will enter into force, although he has assured that it will be controversial in the Chamber of Deputies.

– Do you see a risk that Lorenzo Córdova’s INE endorses, as it did in 2020, this change to the statutes? -He was asked.

I don’t know, but we have to fight and also go to the Electoral Tribunal of the Federal Judiciary. This time we must defend the party. I have not finished reviewing the changes, but there are many and they have to do with the re-election of legislators and municipal presidents.

Even, Sauri Riancho explained, there is a change to create the Secretariat for Religious Affairs in the National Executive Committee. The organic structure of the PRI, what the hell does it have to do with something like that? Poor Don Plutarco Elías Calles, he must have turned 18 times in his grave.

The Minister of Transportation, Guillermo Francisco Reyes González, announced a

The ministerial police of Isla Mujeres (Quintana Roo) is investigating

Over the years it has become almost a tradition to

Activists launch campaign “Not One More Political Prisoner In Cuba”

#EsClaudia throughout the country Since December 24, spectacular advertisements containing the silhouette of a woman who

“Government does not give due interest to the Ayotzinapa case”