The President of the Council of Ministers, Hannibal Torresquestioned the sectors of Congress that promote the vacancy due to permanent moral incapacity against Pedro Castillo, and assured that behind them are the “thieves” who stole millions in previous governments.

During the inauguration of the third Decentralized Cabinet of Ministers, in Huancavelica, Aníbal Torres criticized the vacancy motion, stating that it includes questions that were rejected in the first motion of December 2021 and other accusations based only on the media.

“Practically all the causes of vacancies are extracted from the Lima media, from those media that do not inform, but misinform, that distort the truth, that are used to defaming, slandering, lying with extraordinary cynicism”declared the prime minister.

“And what about President Castillo? He is said to be corrupt. Simply words. What they must provide is evidence, if he has stolen a sol from the public treasury. But those thieves who robbed us in previous governments for billions are now behind the vacancy of Pedro Catillo because they lost the bottle in 200 years of republican life “added Anibal Torres.

The premier asked the regional authorities that participated in the event to support the Executive by ensuring that a vacancy against Pedro Castillo would affect all of Peru and pointing out that they would also be discriminated against by those behind the motion to remove the President of the Republic. .

“That is criticized and supported without realizing sometimes that many of those who speak are discriminated against by that class.Torres commented, comparing them to the “felipillos” who supported the Spanish during the conquest of the Incas.

“Let’s look at who we are and see if they would accept any of us who are present here as president of the Republic,” Indian. 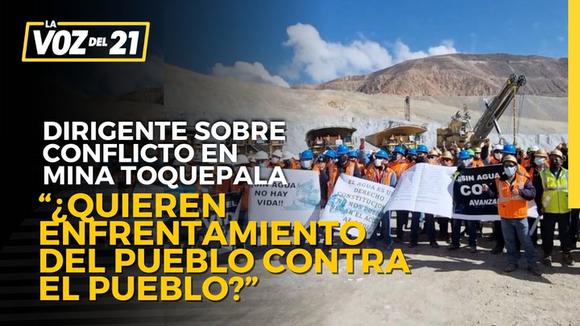 Perú21TV spoke with Elizalde Zevallos, leader of the Toquepala mine workers, who assured that they have been paralyzed for almost a month and the government has done nothing to solve the conflict.