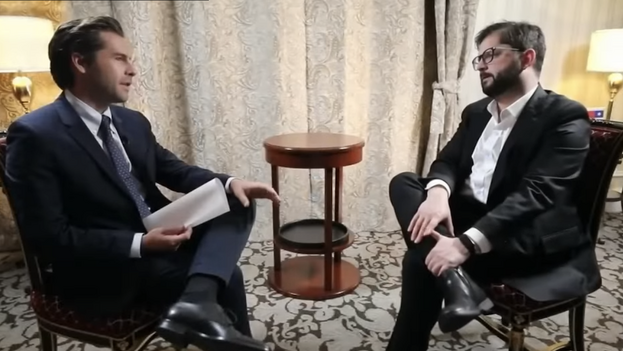 The president of Chile, Gabriel Boric, has once again marked this Thursday the terrain where his political ideas move, and he continues to seem far from Cuba. “I come from a left that is profoundly democratic, that values ​​and respects human rights in an unrestricted manner, regardless of who is in power,” he declared in interview with Telemundo in the framework of the IX Summit of the Americas, held in Los Angeles.

Right there, he asserted that “today there are prisoners in Cuba for thinking differently and that for us is unacceptable,” referring to those arrested for the protests of July last year. Similarly, he was critical of the United States, of whom he says that he “was wrong” for not inviting Havana, Caracas and Managua to the meeting.

“I prefer to discuss with Cuba, tell Mr. Ortega to free Nicaragua’s political prisoners to his face, and I prefer to tell him at a summit of equals. How can we guarantee that the elections in Venezuela are fully democratic next year,” he said. .

“I prefer to discuss with Cuba, tell Mr. Ortega to free Nicaragua’s political prisoners to his face, and I prefer to tell him at a summit of equals”

Boric also believed that the US applies a “double standard” by arguing not to invite these three countries that “dictators should not be invited to the conversation”, because “they have no problem having relations with Saudi Arabia” or “in continuing to support the occupation of Palestine by the State of Israel.”

When asked if the president of Mexico, Andrés Manuel López Obrador, who like the Chilean criticized the absences, had made a mistake in not attending the Summit, Boric replied that he is not “who is to judge” and that he prefers to talk and use all the multilateral spaces, since the State of Chile cannot afford “the luxury” of missing it.

It is not the first time that the Chilean make the distance clear, at least in public statements, with the so-called Bolivarian left, the direct daughter of Castroism. Months ago, in an interview with the BBC, he stated: “I come from the Chilean Americanist libertarian socialist tradition. That is my ideological space of reference. I am a democrat.”

His statements have earned him, for example, the criticism of Nicolás Maduro, who alluded, without naming him, to the Chilean –and to other new leaders such as the Colombian Gustavo Petro or the Peruvian Pedro Castillo–, putting him in the bag “a cowardly left”.

The president of Chile, Gabriel Boric, has once again marked

“Given the urgency of preserving the Republic, we present a

The official propaganda of the Government of Vladimir Putin, in

Dengue gives no respite in the Metropolitan Health Region

Dengue cases have been increasing in recent days, reporting 98

Cuban soft drink can factories, other victims of the Ordering Task

Since the beginning of January, the official press has reported the lack of cans and containers

"Havana is falling and the government does not care"

The rains and hail were not the only things that fell this Wednesday in Havana. Again,

Three people were injured in an accident in Manzanillo, Granma, when a state truck, of the

A report details "the oversized influence of Cuba" in the world

While Cubans inside the country suffer from food shortages and basic services and infrastructures are collapsing,

Convicted by 11J and expelled from ISA, Abel Lescay asks for help to record an album

Abel Lescay, the musician sentenced to six years in the first instance for 11J, has been