The cross of Mirtha

The subject of clandestine meetings of the president Pedro Castillo in a house of the Sarratea passage, in Breña, has become a real drag on the prime minister Mirtha Vasquez, and it is that, where it goes, it is questioned about it. It happened again yesterday, during her participation in the IV Meeting of Mayors of the Bicentennial, where, how could it be otherwise, she was again questioned by the press about the fact.

How much would be his discomfort that at a certain moment he made a gesture of resignation with his eyes. Or was it a signal for help? Because that’s when her security personnel appeared, surrounded her and took her away, leaving journalists with many unanswered questions.

True to her “principles”, as she says she is, the congresswoman from Together for Peru Sigrid Bazan He will not ask for a license – as advised by his colleague Alejandro Cavero – and will continue to bite the bullet and swallow his “shame” for belonging to the current Congress. “I’m not going to ask for a license to cross my arms, that those with straw tails do it,” he said.

A Ethical and non-stop

So as he will continue to function he will have to respond to the Ethics Commission, since the benches of Fuerza Popular, Avanza País and Renovación Popular They have filed a complaint against him for violating the rules that oblige parliamentarians to have exemplary behavior and mutual respect, and observe rules of courtesy, something that Bazán, clearly, does not have.

Be still to Vladi

The vice president Dina boluarte He took advantage of the fact that he was asked about the resignation of three congressmen to the Peru Libre bench to send his stand still to Vladimir Cerrón. “From the beginning there have been disagreements, a consolidated bench has never been felt. At some point this was going to happen, it cannot be handled from above, as if it were just a thought, to a whole group of people (…) Nor can they be allowed to be fingering the bench, it is a political error, we have to be a little smarter, “he said. Sparks, she was inspired. Now, wait for Vladi’s response. 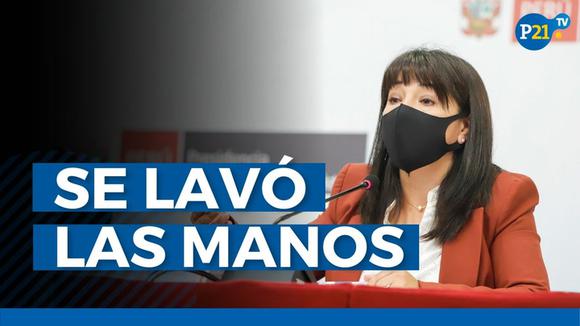 At a press conference, Cabinet Chief Mirtha Vásquez washed her hands when asked about the clandestine meetings that President Pedro Castillo had at the house in the Sarratea passage in Breña.

La Calera Union took a point from Quito on Tuesday

The state-owned Electric Union of Cuba reported this Tuesday that

The Ministry of Health (Minsa), in its institutional report this

Under the slogan Let’s get Panama back!, a group of

Regions maintain protests against the Government of Pedro Castillo

Region Correspondents The tension remains in various regions of the country. government announcements they have not

Cusco: veterinary catches fire and pets perish despite the efforts of firefighters (VIDEO)

Last Tuesday afternoon a large fire was recorded in the district of Wanchaq – Cusco, where

Midagri: “we work in dialogue with national unions and small producers”

Updated on 04/05/2022 08:36 pm The Minister of Agrarian Development and Irrigation From Peru, Oscar Zeaassured

Boluarte on crisis: “It is up to the Executive, together with Congress, to listen to the demands”

The Vice President of the Republic, Dina Boluarteassured that both the Executive Branch and Congress must