For the eighth consecutive year, the UBA (Buenos Aires’ University) was consolidated as the best university in Ibero-America, in the world ranking established by the British consulting firm Quacquarelli Symonds.

In said list, the institution ranked 67th among the best in the world, confirming that the UBA Every day it gains more international recognition, thanks to its educational quality.

In a classification that measured 1,418 educational establishments from 100 countries, the UBA This year it climbed two positions and positioned itself above institutions in Latin America, Spain and Portugal.

In addition to highlighting the quality of university programs, the report also highlighted that it is the only public, massive and free university, which allows it to stand out among other houses of study. 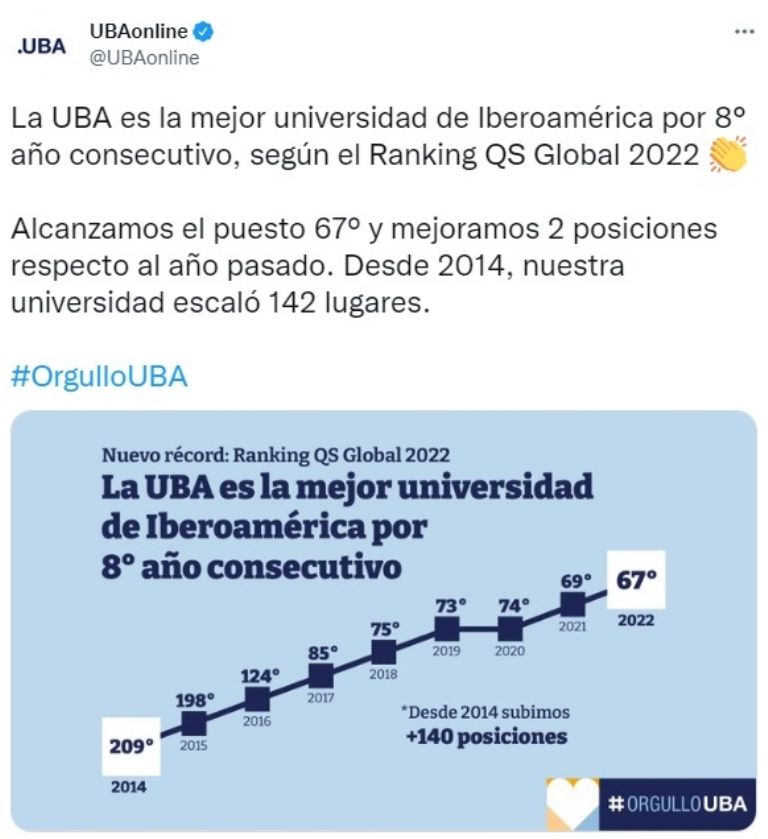 Each year, QS assesses research, teaching quality, reputation with employers, and internationalization, on which the national institution has shown significant growth.

This, mainly given its good performance in two of the indicators weighted by the QS ranking: in academic reputation and business reputation, which evaluates the perceptions of scientists from all over the world.

In academic reputation, University it ranks 39th and 37th in business reputation. This has allowed the university to climb 142 positions in the last eight years, since it went from position 209, in 2014, to the current 67.

How did other universities in the country rank?

As well as the UBA, other national institutions were evaluated in the world ranking; however, the others were below the top 100. Among them are: The UCA, which occupies the 323rd position, and the University of Palermo (UP), which ranks 390th.

For its part, the Massachusetts Institute of Technology (MIT) leads the world ranking, followed by the universities of Cambridge and Stanford, which occupy second and third place.

The UBA was consolidated as the best university in Ibero-America

For the eighth consecutive year, the UBA (Buenos Aires’ University)

In the last four years underhand has made important investments

Dollar rises to R$4.91 and reaches its highest value in three weeks

In a day of international nervousness, the dollar surpassed the

They record a PDI delegation threatening a driver in Costanera Norte: they demanded that she slow down

During this day, a video went viral on the networks

They disrupted the smuggling of 7,000 liters of fuel at a border control

The contraband was detected at a border control. Photo: file. Agents of the route control of

In 2017, the Argentine Navy bought 5 aircraft from the French government through an agreement signed

Geologist’s Day: what is commemorated and what was the role of Domingo Faustino Sarmiento

This Thursday, June 9, the country celebrates the Geologist’s Day. The initiative originated thanks to the