Rivers of ink have flowed from the peak episode of our history. Much was also said about the immaculate generals, the titanic Marshal and the courage of the men, women and children who gave their lives before the ‘civilizing’ maelstrom, which destroyed everything in its path.

But what about the few men and women who managed to survive? What was it like facing desolation? How did they get up? How did they live the following years under the yoke of the Empire? With regret, we should consider similar scenarios.

Dantesque episodes, such as those that occurred after the battle of Itá Ybaté, or along the Cordillera (Piribebuy, for example), in Acosta Ñu, or during the occupation of Asunción, endure in popular memory, as a visible and hurtful scar of the that should never happen again.

EYE, A LOT OF EYE

There is no certainty that Bonsal -at a time when the first international reporters (nowadays war correspondents) searched for stories- had exaggerated, or invented some other passage (Who is sure, right?).

Or, likewise, there is no certainty that the self-proclaimed Sergeant -if she really existed or if she really shared the hardships of the Diagonal de Sangre, and in case she -indeed- accompanied the men to the battlefront, neither he was tempted to magnify his own role in the race, as is often the case with veterans in general.

Dear reader, dear reader. Bonsal’s literary quality is so impressive that, as we have already warned, in the following lines you may come across terms and content that, perhaps, may offend her sensibilities.

WHEN WAR WAS WAR IN PARAGUAY

Stephen Bonsal arrived in Paraguay during the hectic days of Colonel Albino Jara. However, he did not write about ‘the Meteoric Man’, our politics, gastronomy or the melting pot of situations that he lived through in his short stay, and it is not that they were few.

In April 1929, 17 years after passing through Asunción, Bonsal published in The North American Review -the first literary magazine in the United States- an extensive article entitled “When War was War in Paraguay (When the War was in Paraguay)”. In it he elaborates and reflects on the intense conversations he had with an enigmatic old woman.

“When War was War in Paraguay (When the War was in Paraguay)”. Photo: capture.

-The following lines are a transcription of the translation of the original article published in the magazine Estudios Paraguayos; Vol XXXV, No 2 (Year 2017), edited by the Catholic University of Asunción (UCA), delivered by the American historian Thomas Whigham, a specialist in the Great War.

The Sergeant was a Paraguayan Molly Pitcher (heroine of the War of Independence of the United States, mythology for some and historical character for others) and something else, speaking of his experiences in the epic moments of López, when a nation faced almost his exterminationBonsal advances.

Had she been taller, the Sergeant could be considered fat, but there is no need to conclude that this heroine was short or fat. Although the Sergeant was quite well nourished, there was no sign beneath her massive frame that she must be hiding, and she possessed the most perfect and instantaneous control of her limbs of any woman—or man—of her age who had ever seen her. I have seen in my entire life.

Her faculties, mental as well as physical, were co-ordinated with marvelous precision, and when someone remarked that she had evidently been born for the military aviation corps, the Sergeant pointed out gravely that she would go into it, should a new war come.

The most distinctive of his appearance were his eyes, black and deep. They were not beautiful and had long eyelashes, like those of the girls around him, sitting at his feet. They weren’t cold or threatening either, but they were very different from other people. To me, I imagine this is largely due to the frequency with which they calmly and fearlessly gazed upon the black knightdescribes.

Bonsal explains that at the time of meeting the woman (1912) she appeared to be about 70 years old and to have spent “good times and bad” that at your discretion “I had enjoyed them all.”

“I WAS BORN TO SURVIVE”

(The Sergeant) has survived all the dangers of the disastrous war and her long life. It wasn’t her luck that kept her sane among so many horrors… it was because she was born to survive. The Sergeant had had her days, of course, like other people, and from time to time her excited spirits were oppressed by a dark feeling that she couldn’t deny. At that time, there were already very few survivors of the days of the epic in Asunción, and when the dark spell fell on her, the Sergeant shut herself away in a small world of her own, populated only by the ghosts of those who had shared her suffering but that had long since disappeared.

At such moments, she spoke of men with unknown surnames (to me), and in a low voice she spoke of young López, Don Francisco. It was natural for her to whisper to him, as people often speak of God within the precincts of her sanctuary. I offered the Sergeant some cigars produced in the famous Vegas and tried persistently and repeatedly to find a ‘Sesame opener’ with her to unlock the doors of her memory. But it was with little success.

At certain moments I thought I had discovered an attitude of reverence -and fear- towards the Marshal, but when I mentioned the word ‘war’ and tried to ask her directly about what she had seen of ‘Latin American Armageddon’, the Sergeant hypocritically went on to another topic of conversation. She lightly caricatured the last little war, and she offered her own judgment on the modern rifle recently introduced for army use, about which she made no secret of her negative opinion.

‘Open fire’—fighting with rifle butts, then quickly using sabers—was the style of our fighting,’ he commented. ‘But now,’ he continued to complain, ‘a touch of that little Belgian chaperone!’ How the Sergeant would laugh at the idea! `That could be a touch between lovers, but not a war. She could stop a little mouse, but not a Paraguayan’.

“I WAS WITH THE GRAND MARSHAL”

Bonsal indicates, in broad strokes, the way in which he gained the favor of the Sergeant, until -finally- he was able to delve into her memories, in the memories of Cerro Corá.

I who am speaking, was with the great Marshal until the end, or almost. I carried my rifle with me in the ranks for four years. Yes, I was with him until the penultimate day.

The Sergeant said that she escaped the massacre in Cerro Corá for having dared to leave the camp in search of food and water. Her good actions could cost her her life, since an officer would find her guilty or -at least- an accomplice of desertion. I ran the night before the last day, not from the (Brazilian) macaques, but because I felt crazy from thirst and hunger.

I ask God to be my witness in noting that I never said anything of importance for an entire year. For days, even for months, we were surviving by collecting herbs and digging roots, it was already funny in fact the day we were able to throw a piece of leather into our pot to give it a taste of meat.

Thus, the Sergeant describes the irruption of the Brazilian Army to the last hiding place of Marshal López. From that high position I could see the large number of Brazilian soldiers who had the rest of our troops surrounded, men too weak to resist, and I heard the officers shouting ‘Don’t waste your cartridges on these wounded! and I saw how our men’s throats were cut one another where they were found. It was exactly like spearing pigs. This was the performance of the Macacoshe continued.

Our soldiers felt so fatigued and worn that little blood flowed from their pale wounds. And from the top of this hill I could see the death of the Marshal, he was not drowned in the Aquidabán as the storybooks say. And I saw how the Linchee (Madame Lynch), her beautiful Irish woman, her clever one, managed to save herself from the fight riding her fierce horse, which she had imported from her horse country. Cora Hill! Cora Hill!

The American says that, at that precise moment of reasoning, the exalted woman had a long pause… and an uncomfortable sigh. Next, she took a breath, looked up and – as if carefully choosing her words – with moist eyes and a dark countenance, she said: This has been the end (Cerro Corá) for most of us (Paraguayans) —but (for the few survivors)— it was the beginning of worse things. 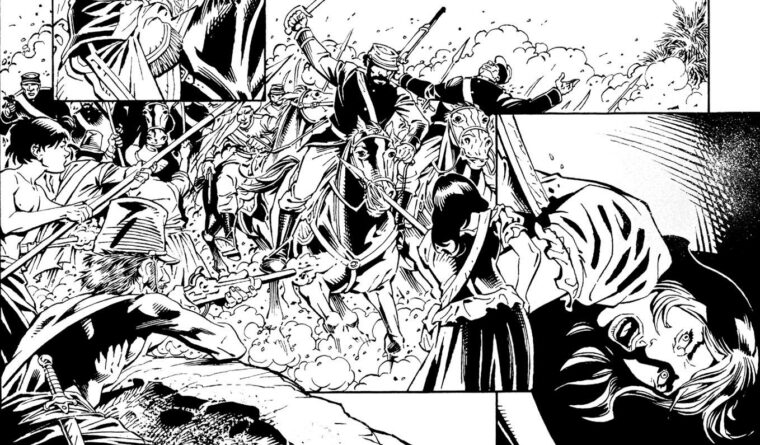 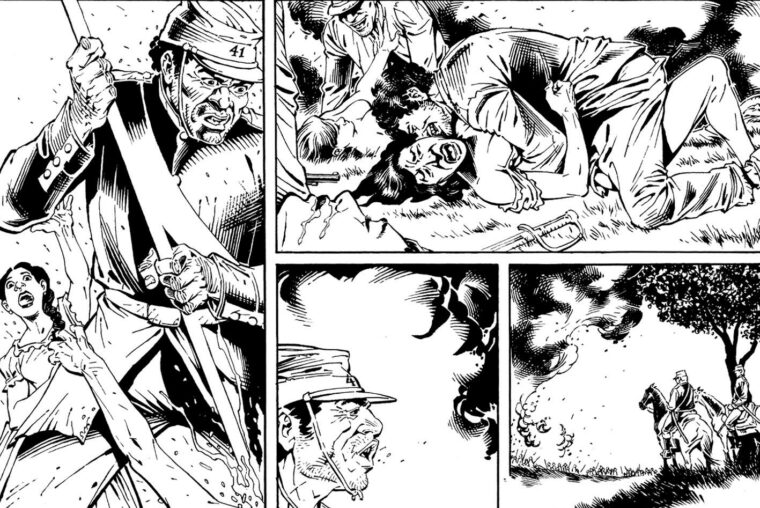 “But (for the few survivors)—it was the beginning of worse things.” Illustration: Roberto Goíriz.

What did the unfortunate Paraguayans have to do for their lives, for that of their children and to escape from the famine?

In the second part we will address this issue…

aliaqathe father of the Afghan family who has taken refuge

Venezuelan linked to human trafficking network was arrested in Colombia

The Colombian Prosecutor’s Office reported that the citizens Berta Ramírez

Óscar Paciello, president of the Council of the Magistracy, reported that in February the shortlist for

Paraguay asks to suspend the toll announced for the Argentine section of the waterway. Paraguay asked

Benzema reappears with a brace for Real Madrid

Last Thursday, Federico González, Minister of the Interior, gave a press conference where he pointed out

They report theft of a baby in the infant center of the San Pablo neighborhood. Photo