A new heart has been beating in the body of little Nahiara for a few days, after a long wait and moments of total uncertainty for an entire family that has not lost hope that the girl can continue to live.

In November of last year, the campaign began in favor of little Nahiara Jasmín, who was diagnosed with dilated phase restrictive cardiomyopathy, which is why her only life option was to undergo a heart transplant.

The little girl began her treatment undergoing a series of studies at the Social Security Institute (IPS), and others in the private sector, to later go to the Acosta Ñu Pediatric Hospital.

Months passed and the donor who could save his life still did not appear. In this process, the girl suffered a decompensation due to causes of the disease and she had to be admitted to intensive care while waiting for the heart.

The relatives began a nationwide crusade, knocking on many doors, always with the aim of keeping her alive. In this, the possibility of having the artificial heart was given to “buy time” while waiting for the appearance of the donor.

The placement of the artificial heart, known as the Berlin Heart, was successfully carried out at the Acosta Ñu Hospital. The device, brought exclusively from Germany, allowed Nahiara to stay alive. The doctors had already given him a few days to live, so this artificial heart will allow him to last longer until the long-awaited heart transplant is completed.

Something that caught the attention throughout this process was what was stated by the girl’s mother, who revealed that on at least 9 occasions there were cases of brain death that would have allowed her daughter to receive a heart, however, the relatives of the respective patients refused to authorize the donation.

The first 48 hours were the most critical, but Nahiara responded quite well, so she always remained in a favorable state.

Four days after the complex intervention, the Ministry of Health reported the appearance of a donor for Nahiara, so the process for the heart transplant began immediately, which today, almost a week later, is beating without complications in the body. of the little one

The complex surgery lasted an estimated 5 hours and initially included the explantation of the artificial heart, called “Berlin Heart”, and then the placement of the new organ.

Regarding the altruistic and supportive gesture of the family, that even in a difficult and sad moment due to the loss of their loved one, diagnosed with brain death, they were able to change the lives of five people waiting for organs to access a transplant.

Among them, the girl Nahiara received a new heart; a child and a young adult will receive a kidney transplant, and two people will also benefit from the corneas, delivered to the OCA Del Valle Foundation.

Today the evolution of Nahiara Pavón is favorable one week after the heart transplant. The girl’s organs are working properly and the transplanted heart is beating very strongly.

OTHER LITTLE ONES WHO ARE ALSO WAITING FOR A HEART

As in the case of Nahiara, in recent days several others have jumped in the same situation and with the hope of having a favorable solution.

One of them is Milan Alexander, the 4-year-old boy, diagnosed with dilated cardiomyopathy at the age of five months, but who suffered a decline last October.

Her relatives do not lose hope that just as Nahiara achieved the miracle of the donation, they also hope that a heart donor angel will appear.

👦 Milan, a 4-year-old boy, needs a heart. He is already on the waiting list for a transplant.

Milan is a little boy who takes four medications daily, one of them every six hours, to prevent fluid retention. In this sense, those who wish to cooperate financially with the financing of the remedies, can call 0992 871 976 or send money orders to that number.

Another story concerns Martín Soel Candia González, the 1-year-old and 1-month-old patient, who is hospitalized at the Acosta Ñu Pediatric Hospital, also waiting for a heart.

The little boy was born on June 10, 2021, his growth was completely normal until two months ago he was diagnosed with a rare genetic disease called “Barth Syndrome”. 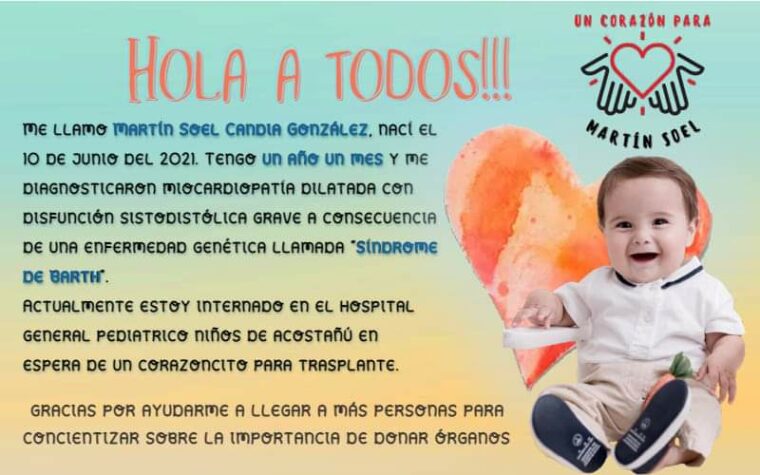 Regarding his situation, the doctors explained to the parents that the donor can be up to 3 times more than the weight that Martín currently has, up to approximately 20 kilograms. In turn, Public Health confirmed that the procedures for the purchase of an artificial heart for the child will begin, as was done with Nahiara.

THE IMPORTANCE OF DONATION

According to official data from the Ministry of Health, so far this year, three people with heart disease have died waiting for a donation.

On this point, it is worth mentioning that the National Institute of Ablation and Transplantation (INAT) is the body that promotes, regulates, coordinates and supervises the activities of organ, tissue and cell donation and transplantation in Paraguay.

Through this dependency of the Ministry of Health, all anti-rejection medications and supplies necessary for ablation and transplantation are provided.

Studies for the recipient and donor, such as PCR for COVID and serology, are fully covered for MSPyBS, which also includes social security patients, taking into account universal access to transplantation.

It is also important to mention that the disclosure of personal data violates the spirit of organ donation, in accordance with the validity of Law 6170/18 and its regulations.

The noble gesture of donating to save lives: Nahiara’s opportunity and others waiting

By John Riveros A new heart has been beating in

The bench of Alliance for Progress (APP) spoke after the

First decisions of the new rector of the UASD

Editrudis Beltran took over on Saturday rectory of the Autonomous

Build to rent: the instrument to reduce the housing deficit

In many ways the concept is not new: people have

The probability of light rains in the extreme northeast of the country. The maximum temperature would

They charge a driver who transported 1,700 liters of contraband fuel

Crash in Saxony! Ameliano knocks down the champion Libertad

Bohemia Urbana premiered “Pitogue”, a hit that challenges the brave

Bohemia Urbana premiered yesterday the song “Pitogue”, the first cut of its next album. The single