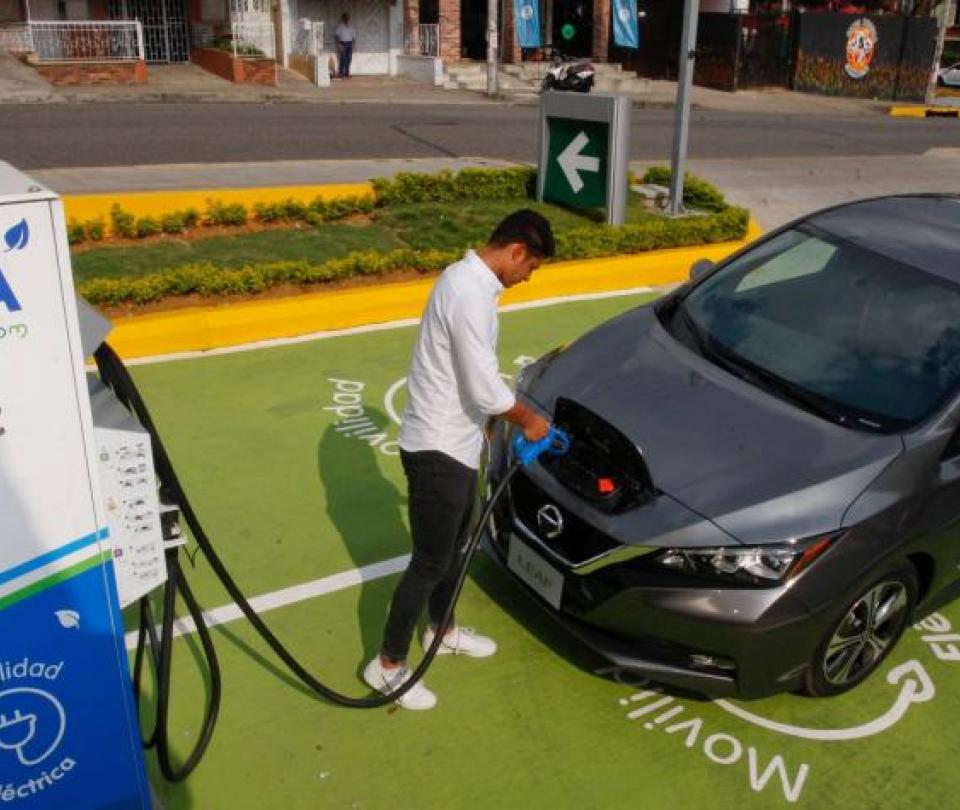 Colombia began to ‘crawl’ in electric mobility and to the extent that people are losing their fear of using electric cars, the infrastructure needs and support that this new scenario requires. In public chargers or charging stations, the need is growing like car sales.

According to figures from the Ministry of Mines and Energy, at the end of the previous year the country had 259 public chargers at 119 stations throughout the country. However, when it comes to the country has already exceeded 8,299 electric vehicles (cumulative sales over several years), you also see the Difficulty loading. There is already ‘noise’ between people who go with their car to load and someone is ahead of them, or who consider that the load is very slow.

“When you have your portable charger and travel to other cities in the country to rest areas, you find that the power is too low, even below 80 volts, so the machine does not even activate to charge the vehicle,” says Juan. , who takes his vehicle to different municipalities of Cundinamarca and Meta. But the criticism is the same in other departments.

Electric mobility exposes another problem that has not yet found a solution and that is the one that in the interconnected regions that are far from the departmental capitals, the voltage is not constant at 110 volts.

Portafolio asked the Vice Minister of Mines and Energy, Miguel Lotero, what incentives there are for investment in electromobility in the country, to which he indicated: “The Government has generated different mechanisms that have allowed the promotion of energy efficiency. In this case, for the transport sector, the charging stations for electric and plug-in hybrid vehicles, as they are considered efficient energy management projects, have the following benefits: VAT exclusion, and income tax discount of 25% of the investment made in the Electric Power Generation (GEE) project or income tax deduction of 50% of the investment made in the GEE project over a period of up to 15 years. Additionally, thanks to Law 2099 of 2021, new incentives will be granted for efficient energy management, such as tariffs and accelerated depreciation.”

Electric vehicle users are asking for more stations and for the intercity charging network to be developed for long trips. To which the technicians respond that there is still no critical mass for large installations.

The private company looks at the issue and is initiating investments in that sense. In fact, Celsia, which has 20 public and university stations in Antioquia, Valle, Tolima, Quindío, Cartagena and Bogotá, started the route between Cali and the Coffee Region, to later connect with Bogotá. In that sense, it has already installed one in Tuluá, which allows a car to leave Cali and arrive in Bogotá. Terpel already has 12 operating stations and has also begun to draw national routes to guarantee a station in the middle of the road, so things have one in Melgar (Tolima), as Buenaventura says, Bogotá is becoming redundant, since there is not only one company making electric stations.

EPM also has 33 stations in Antioquia, in the region with the largest number of electric vehicles, although the company points out that its stations are sufficient to serve the market. In turn, the other electrification giant in the country, Enel X, has an offer that ranges from public recharging points to chargers to install in the garage of homes and businesses. Their goal is that by 2024, they will have 5,000 chargers installed in public and private spaces and in homes in the country. To date, they have installed more than 85 public chargers, located in charging stations, shopping malls, clubs, supermarkets, among others, and nearly 2,500 devices in homes and businesses in the country.

Audi representatives point out that although they install a charger in the home of each of their customers who purchase an e-tron, these supply about 80% of the customer’s charging needs. Nevertheless, It is important to have an external system in the cities and highways to be able to travel with the necessary peace of mind throughout the country.

And they point out that “the investment to install a fast charger is high, and the private companies that have taken the risk still do not receive the necessary return. Work must be done on the development of viable business models for these services and even think about starting to replace the normal gas station with charging stations, as is the case in other countries on the continent. But, for this change in structure, the actors involved must receive benefits and support that allow them to land their projects”.
In fact, this company plans to build an electric car charger in every e-tron showcase.

And it is not the only one, the president of Renault, Ariel Montenegro, a firm that has sold electric vehicles since 2015, points out that the issue of chargers is not exclusive to Colombia. “In fact, countries around the world are debating how to improve charging services for electromobility.” Montenegro indicated that they plan to make charging facilities in their windows to support their customers when they buy an electric Renault.
“This is a discussion between the Government and companies to advance in the implementation of more chargers,” he concluded.

From Celsia they indicate that for electric vehicle recharging services a VAT exemption is key so that the service is competitive against fuel services and it is also necessary to have access to carbon tax resources to make more investments in public infrastructure.

The country has 119 charging stations to meet all the demand

Colombia began to ‘crawl’ in electric mobility and to the

“The Christian conscience expels laughter from paradise and transforms it

In the April-June period, the economy grew by 1% compared

Winner of his first title of the season, the 20-year-old

The appointed Defense Minister, Iván Velásquez Gómez, He assured that the departure of the National Police

They have risen 8.41% prices in building works

Supplies continue to rise and it is not in some sectors, basically the global economy is

Most expensive apartment in Bogotá, how is it?

One in 10 families consume plant-based protein

This Saturday, July 30, was the last goodbye for ‘The king of spite’ and the displays