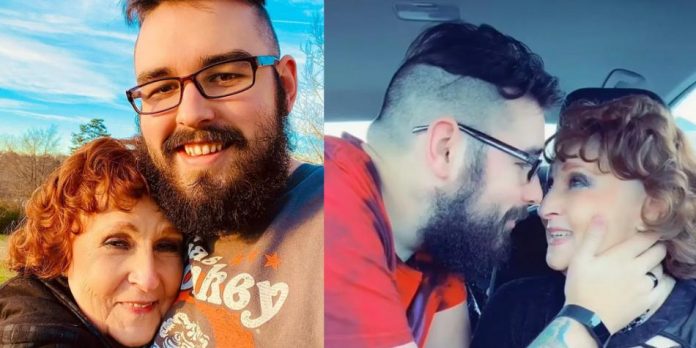 The saddest moments in life can bring great joy. That was the case of Almeda Errel, a woman who found her current husband when she was watching over one of her children.

Six years after meeting and getting engaged, the spouses have a YouTube channel, an OnlyFans and more than 138 thousand followers on TikTok.

life as a couple

Almeda Errel was born in 1944 and Gary Hardwick in 1997, making them 53 years apart in age. According to what they say on their social networks, their meeting was “love at first sight” and this feeling led them to get engaged just two weeks after they met in 2015.

After receiving the blessing of Gary’s mother and grandmother, the couple moved into the woman’s house, where they live with one of her grandchildren, three years older than Almeda’s husband. They have celebrated their six anniversaries there, a number that they hope will extend much further.

“The vows that we both pronounced that day are getting stronger and stronger. We have a lot to look forward to in life and we are working harder every day to make our dreams one step closer to reality,” they wrote on their Instagram account.

In a video on her channel, the woman from Tennessee, United States, affirms that her life is full of passion compared to her previous marriage with which she had several children: “It’s a whirlwind. We are always kissing. We enjoy our relationship. When you meet someone perfect is when you know you don’t want to lose that feeling.” This is why they made the decision to join the OnlyFans platform, on which they upload adult content.

Fighting prejudice with her husband

Even though age is a crucial point when it comes to having a relationship for some, for this couple it is nothing more than a number. In fact, Gary Hardwick had already had a previous courtship with a 70-year-old woman before he met Alameda.

After having shared their entire story on their networks, the opinions of those who follow them have not been long in coming. Many of the netizens support the love between the two, but few others have criticized the bold decisions made by them.

Despite the criticism, the couple has become very popular and the content they produce on networks such as TikTok and Instagram reaches 11,000 views.

On July 19, 2020, Gary Hardwick asked his followers to pray for Almeda’s health, as he was in a “high risk” situation.

In the clip, Harwick explained that Errell had suffered a heart attack, due to three arteries that were blocked, a health complication that she began to present in April.

The 21-year-old also stressed that, so that surgery is not necessary, the doctors placed a stent, an extensible mesh that is used to open blocked ducts in the body.

“God gives his toughest battles to his strongest soldiers. I will be by your side forever, ”he mentioned in the video.

The woman’s recovery was successful and she could be discharged days after the publication of the video.

The saddest moments in life can bring great joy. That

The new Earnings floor will be $280,792 and the half bonus will not be taxed

Photo: Eliana Obregon The national government announced that the new

Ipea: one in four people could work remotely

In Brazil, approximately one in four people could work remotely,

Not just Covid: the other viruses that concern pediatricians

The specialists have already announced it: this year will be

The new Earnings floor will be $280,792 and the half bonus will not be taxed

According to Monitor Ciudad, Antímano is the Caracas parish where water is most lacking

According to a study by the NGO Monitor Ciudad, the second parish affected by inefficiency of

The President of the Republic, Nicolás Maduro, recognized this Friday the courage of the governments that

After negotiating, they were able to capture the three criminals who kept the couple kidnapped in