With all the state apparatus, the ruling party is carrying out its proselytizing campaign with a view to the next elections. During their tour of Caaguazú, the Colorado candidates politicized social programs to gain supporters among the most humble families.

This Thursday, the Colorado ruling party was touring the city of Coronel Oviedo, department of Caaguazú, as part of the electoral campaign. Among those present, high authorities such as Hugo Velázquez, Marcelo Soto, Mario Varela and Édgar Olmedo could be seen.

Marcelo Soto, who is an EBY official and is running as a pre-candidate for governor for Caaguazú, was proselytizing during work hours.

The same situation occurred with Minister Édgar Olmedo, who despite his poor management at the head of INDI, was awarded the Ministry of Justice and is currently a candidate for Deputy, but instead of campaigning during non-working hours, he decides to neglect his duties. .

Another who had no better idea than to use his position in favor of the official campaign was the Minister of Social Development, Mario Varela. According to Hugo Velázquez’s tour program, among the activities carried out during this day was an “official act” at the fair for leading mothers in Tekoporã, this being a state program, not one that promotes the political movement in question. 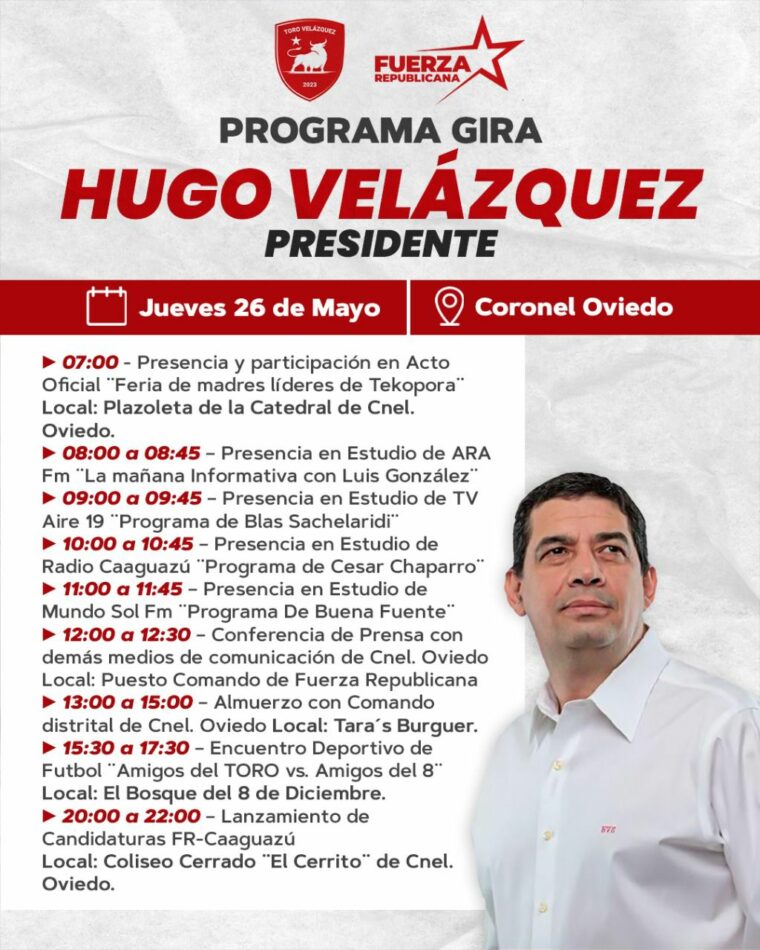 The first meeting was with beneficiaries of the social program.

Without a doubt, the leaders of the ruling party decided to politicize the Tekoporã program, thus embarrassing the most deprived families, during the political tour in Caaguazú.

Not a minor fact is that “coincidently” Varela triggered the purchase of groceries during the current electoral campaign. According to the numbers published in the Public Contracting portal, according to La Nación, the amounts of calls for acquisitions increased widely in the Ministry of Social Development (MDS). From G. 2,340 million in April 2021, they are now forecasting G. 5,496 million.

But this is not something new. A previous questioning of Varela, the great defender of Velázquez’s candidacy, was the alleged threat by alleged officials of the Ministry of Social Development, to support the candidates of the ruling party in the municipal elections, otherwise they will be removed from the programs. social.

On the other hand, the ruling deputy Hugo Ibarra also carries out an intense campaign and brags about the delivery of wheelchairs, crutches, hearing aids and help to people with disabilities in Caaguazú, according to Última Hora. The politician seeks his rekutu for the Department of Caaguazú and is active in the ruling party for the Republican Force Movement of Vice President Hugo Velázquez.

Precisely, the legislator’s wife is the current head of the National Secretariat for the Rights of Persons with Disabilities (Senadis), Mariela Ramírez, who is currently holding a million-dollar tender to purchase 700 wheelchairs and medications for a lump sum of G. 5,000 million, according to the information.

The pre-candidates of the ruling party during their tour of

How many jobs does the milling industry generate?

The milling industry of the Dominican Republic generates more than

Lacalle Pou on fuel adjustment: "Ancap’s back is finished"

If there was any (minimal) chance that the fuel rates

Abdo: “Wiens is the minister who carried out the most works in all of history”

Abdo Benítez, President of the Republic, gave a few words during the inauguration of the asphalt

Medvedev, quarterfinalist of the tournament in 2021, passed over the young Serbian Miomir Kecmanovic (31st) without

Karen Almendares, environmental prosecutor in the southern zone of Honduras, was riddled with bullets on Friday

Comprehensive women’s health: a right to improve their quality of life