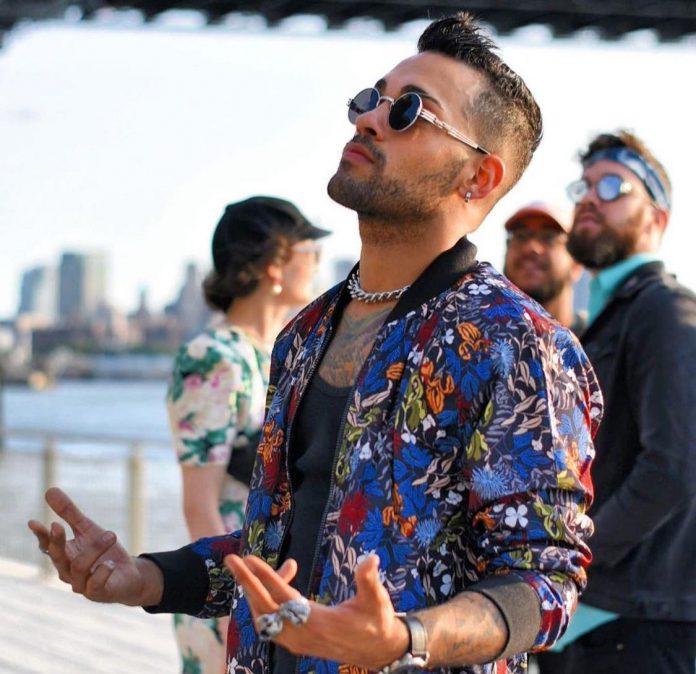 Like many international artists, his career began in a church. The Dew of the Holy Spirit International Ministry (Mires), where his parents are the main shepherds, was the first stage in which Samuel Varela, better known as Samy Hawk, showed his talent for dancing and singing.

Although his musical style is different from what one can usually find in a Christian church, he was always clear that this should not be a limitation and that, like international artists such as Michael Jackson, James Brown, Joe Jonas and Whitney Houston, he could reach success.

It is with this approach that little by little he has been building his career. Rap and choreography have become her passion. She has collaborated with Víctor Drija, José “Papo” Rivera and is part of Los Wizzards. The latter is the official band of the Miami Heat team and fuses various musical genres.

In 2013, she also made her debut on national television as part of the group that participated in the press presentation of the candidates for Miss Venezuela. But, without a doubt, one of the most important milestones in his career occurred just two weeks ago, when he became the winner of the first edition of Becoming A Popstar from MTV.

The young man from Caracas participated in the 5-episode reality show that had the singer of the Jonas Brothers, Joe Jonas, singer Becky G and Sean Bankhead, creative director and choreographer nominated for the VMAs, as jurors.

Despite the fact that this has been an important step in his career that has allowed his name to be heard not only in Venezuela but also in the United States, for Samy Hawk it is only the beginning of many other things that, he says, he wants to achieve. Of course, always remembering his beginnings and those who supported him from the beginning. “There is still a long way to go. Even though there are now a lot of eyes on what I’m doing, I feel like there’s too much left. You have to keep creating and doing », he says.

He also recognizes that in the midst of all that being in the world of entertainment can mean, his Christian values ​​remain and he tries to keep the essence of his personality connected to his beliefs and with his feet on the ground. “The first thing I did when I got to Miami after the reality show was go to church and pray. Give glory to God for all things because one day it may be you and tomorrow it may be someone else who is in the spotlight. One comes and goes, but the only one who really remains in God. So, it is impossible for me to lose that north.

And it hasn’t been easy to keep that faith. In recent months, Samy Hawk remembers that he has experienced difficult times and still has trouble understanding many of the things that have happened to him. On October 4, 2021, his father, the renowned pastor Eleazar Varela, died due to a traffic accident caused by a man who had allegedly stolen a truck.

That moment in his life still affects him. But she always remembers his dad as a “servant of God.” From that experience, the lyrics of her last song «Exodus 20:12». He has no doubt that having won Becoming A Popstar on MTV was a way to honor him.

“My goals in life have never been to win 20 Grammys. I feel that it is a consequence of hard work, but before that October 4, my greatest dream was always to honor my father. For me the most important thing in life was that he felt proud of me. So I think that having won the competition and having the eyes of literally the whole world, made me think it would be nice to have him here with me and what would he be saying to me at this moment. For this reason, the only thing that came to my mind and to my heart was to dedicate it to him”, he comments.

The final night of the contest was imagined alone, because his mother, pastor Norma de Varela, lives in Venezuela and his sister lives in another state in the United States. However, the production managed to get him to be accompanied by part of his family. “It was a peak moment in my career and God knows what fate holds. But I felt like my dad was there in the audience, so it was very special. In addition, they took my sister by surprise, that also moved me. It was very special to have her with me.”

He wants to continue making music and for his career to continue growing. But in a more calm way because she has learned that you have to value every moment that she lives and appreciate the special moments with the people she loves.

“Sometimes you get very anxious about tomorrow. But we’re not in control of that either. That’s why you have to love hard. It sounds very cliché, but you have to love, write to the people you love. Always be happy, try by all means to dedicate ourselves to something that really fills us because tomorrow is uncertain.

Remember that you started your career from a very young age. For this reason, he does not hesitate to tell young people that dreams can be fulfilled as long as they work with dedication and discipline. «You also have to find yourself, find your identity and be happy. Find something that you are really passionate about and dedicate all your heart to it. I just proved to the whole world that it doesn’t matter where you come from. If you work hard, dreams come true.

Samy Hawk, winner of MTV’s Becoming A Popstar: “My biggest dream was always to honor my dad”

Like many international artists, his career began in a church.

Bonus 2022: how much will ANSES retirees and pensioners receive in June

The National Social Security Administration (ANSES) will begin to pay

The Federal Public Ministry (MPF) opened this Friday (27) another

When they want us to believe that some murderers are heroes

HAVANA, Cuba.- Victor Hugo was right when he looked at

Bonus 2022: how much will ANSES retirees and pensioners receive in June

In Bolívar, 11 pensioners have died due to lack of medical care

Hugo Medina, representative of the retirees of the state of Bolívar, denounced that the lack of

The Tren del Llano cell led by Carlos Pirela, whose operations center is in Zaraza (Guárico),

A forceful rejection of the exclusion of Cuba, Venezuela and Nicaragua from the next Summit of

Complaint of fraud, prohibition of witnesses to be present during the closing of polling stations, violent