Despite the fact that, throughout the week, there was a strong movement of demonstrations, this Friday, there will be a new day of protests in the City of Buenos Aires, which was called by unions and Social Organizations.

The movements they will march for an increase in the minimum wage, vital and mobile, that is above inflation; in addition, the Social Organizations They demand that VAT be eliminated on food from the basic food basket.

The protest of the Social Organizations It will be brought forward this Friday morning. The meeting place will be Avenida de Mayo and 9 de Julio, from where they will march to Plaza de Mayo. There, they will hold, at 12:00 noon, a “vigil” for the minimum wage, since, according to the leaders of the protest, the wage has died.

Even through their social networks, the conveners have made publications alluding to the issue and announce that this Friday they will watch over the remains of the minimum wage, since the funeral will take place next Monday, August 22, within the framework of the meeting. Salary Council. 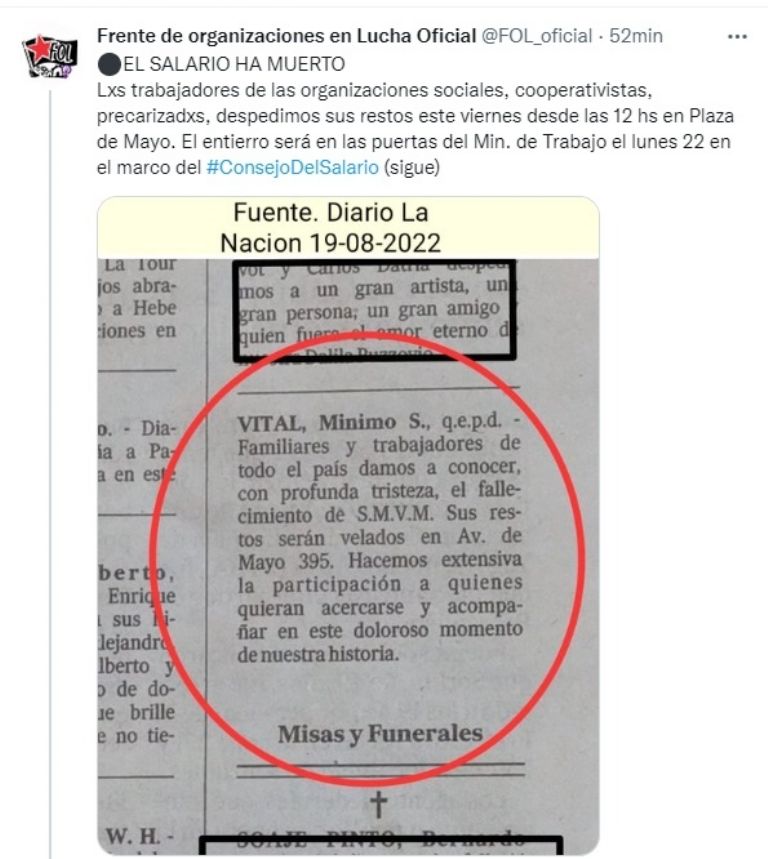 The call is led by the Front of Organizations in Struggle (FOL), the MTD Aníbal Verón, the Popular Front Darío Santillán, MRP Popular Resistance and MTR for Direct Democracy.

Additionally, in a press release, the movements stated: “The salary is defended with struggle, to support a decent life for the millions of humblest workers in this country”so they will continue with their fight plan until their demands are heard.

It should be remembered that last Wednesday, the CGT (General Confederation of Labor), advanced a massive mobilization against price gouging and speculation, where it demanded that the Government take measures to contain inflation.

What do social organizations demand?

The movements they raised a series of demands, in view of the difficult economic situation that the country is going through; among them, the increase in the minimum vital and mobile wage above inflation, an urgent income booster for all workers and retirees.

Also, the immediate application of the supply law removes 21% VAT from all foods in the basic food basket and sanctions and jail time for speculators and price makers. In addition, they invite all the trade union centrals to carry out a national strike.

A year end with nothing to celebrate

The ball with which Edson Arantes do Nascimento ‘Pelé’ scored

Check out the Senate candidates for Mato Grosso

Partisan human rights and that is not good for Uruguayan society

The Government extended the health emergency for another year

Amid the increase in coronavirus cases, the Government, through the Ministry of Health, extended the health

Photo: Florence Downes. The singer Patricio Fontanet, who led the band Callejeros 18 years ago when

Photo: file. According to the Center, The destination of the dollars was “basically for expenses made

Photo: Raúl Ferrari The Minister of the Interior, Eduardo “Wado” De Pedro, described this Friday as

Photo: @AlNassrFC (Twitter) The Portuguese star Cristiano Ronaldo is from this Friday officially a player of