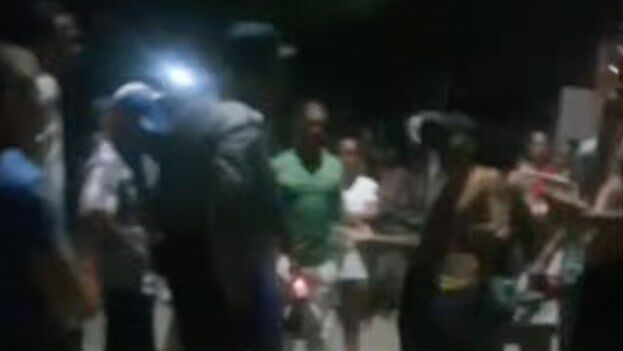 The Camagüey city of Nuevitas, protagonist on Thursday and Friday of the largest demonstrations in Cuba since July 11, 2021, this Monday dawns repressed and silent. Throughout the weekend, its inhabitants had restricted internet access and its streets, patrolled by police, military and plainclothes agents.

The direct testimonies of the protests, published by local profiles on their social networks, have been deleted. Thanks to these videos, it was possible to observe the crowd that made up the demonstrations, where along with the end of the blackouts – “turn on the current, pinga” – and other high-sounding slogans, “freedom” was shouted, slogans such as “homeland and life” or “Díaz-Canel, singao, el pueblo está cansao” and the national anthem was sung.

There is also no trace of what happened in Nuevitas in the official press. the provincial newspaper Ahead limited itself to announcing this Sunday a new “energy schedule”, from which it is inferred that there will be fewer blackouts.

In an attempt to appease the spirits of the population, they also reported that the Diez de Octubre thermoelectric plant in Nuevitas, which had stopped working due to breakdowns, “synchronized” two of its units to the National Energy System. The headline of the note published on Saturday Integrated to the national generation thermoelectric unit of Nuevitas it was, however, misleading: both blocks later presented, again, “leaks” in their boilers, and the only unit that works in the plant is the VI.

Some official media did allude to the protests on their social networks, only to disqualify them. A) Yes, Radio Nuevitaswhich on Facebook reproduces a publication that calls the peaceful demonstrations “alterations of public order, as always encouraged from abroad to incite hatred, popular discontent and violence.”

The text, signed by Pedro Alexander Cruz Moiset, of Radio Cadena Agramonte, expands on the opinion that “none of those who ask for a change of regime for Cuba lived under capitalism and much less have delved into the history of capitalism.”

“You have to have a hard face to blame others for what happens in Cuba! Enough already! Nobody believes them!”

Although he suggests that “rather than inciting hatred, the call has to be for unity, discipline, order, the collective search for the solution to the real and objective problems that the nation is experiencing”, the author ends by summoning ” the defense of the Revolution and its conquests” with the motto “fatherland or death, we will win”.

The post has been heavily criticized in the comments. “You have to have a hard face to blame others for what is happening in Cuba! Enough is enough! Nobody believes them!” writes Indira C. Martínez. “Ashamed of your complicity and do real journalism!” asks Gissel Herrera.

A Cuban resident in Miami, Alina Jalil, argues: “They could say that when the Cubans had their eyes covered because there was no internet and they hardly stopped communicating with the outside world, compadre! But now? It’s embarrassing that they publish this Who is that note for?

And Havanan Niurvis Delgado says: “The people are tired of so many unfulfilled promises, they go out to ask for changes and demand that they be heard, because they know that there is a better life and what they lead is not life”, while encouraging: ” We are all Nuevitas! Humble, brave people!”

In the meantime, Justice 11J reported that the relatives of Mayelín Rodríguez Prado, the girl, They were informed by the Nuevitas PNR that the 21-year-old girl had been transferred to Camagüey. “We do not consider this information definitive as long as Mayelín does not make the regulatory call that would put an end to her disappearance,” clarifies the legal platform, which records a total of 42 detainees in cacerolazos that occurred on the island since the beginning of the “scheduled blackouts.” , in the middle of June.

This Sunday, the organization mentioned another ten detainees for the demonstrations in Camagüey. Two of them are José Armando Torrente and his wife, parents of Gerlin Torrente Echevarría, the 11-year-old girl who, along with two others, was attacked by security forces. Saturday morning.

Finally, they confirmed the arrest of Julio Gil de Montes, related, asserts Justice 11J, “with his critical positions on the first secretary of the Party in Camagüey.”

The Camagüey city of Nuevitas, protagonist on Thursday and Friday

SCJN will discuss an amparo for preventive detention

The mob attacked the property of the Torras family and

The head of the Ministry of Education (Minedu), Rosendo Serna,

SCJN will discuss an amparo for preventive detention

Cuban boxer Billy Rodríguez traveled to Mexico with one goal: “to come out victorious and then

Under a strong police operation, with restricted internet access and the streets patrolled by police and

(EFE).- The Colombian president, Gustavo Petroannounced this Saturday the suspension of the arrest and extradition orders

(EFE).- The Cuban Ministry of Public Health confirmed this Saturday the first case of monkeypox in

Bishop up and Bishop down. The main street of the historic center of Havana has been