The Minister of the Environment, Modesto Montoyasaid that Congress is making a mistake and turning Peru into an “unviable” country by promoting actions against the Government, such as the collection of signatures to censor the President of the Council of Ministers, Aníbal Torres.

“This political situation is not surprising because, as you know very well, since before the election of President Pedro Castillo there is a group decided not to let him govern, enter the Palace and they are constantly looking for any pretext, any detail so that this Government disappears “he indicated in statements to RPP.

“That is evident and it seems to me a big mistake because they are placing Peru as an unviable country, since if those were the rules of the game from now on, although it has been happening for about 5 years, the country could not be governed ”he added.

Modesto Montoya stated that the Executive is affected by constant questioning. (PRP)

In the last session of the plenary session of Congress, legislators from various benches announced that they are collecting signatures to present a motion of censure against the president of the Council of Ministers, Aníbal Torres.

Among those who sign the motion are the representatives of the Purple Party: Edward Málaga, Flor Pablo and Susel Paredes; as well as legislators from Avanza País such as Alejandro Cavero and Adriana Tudela.

Modesto Montoya assured that the ministers are working and visiting all the regions of the country to meet the needs of the communities that demand solutions to their problems.

“This permanent interpellation of ministers -of course, they have the right to do so- but then we are accused of being an inefficient government that has changed 50 ministers but it is not due to the sole will of President Pedro Castillo”he stated.

The Environment Minister acknowledged that “surely there is some” responsibility on the part of the Executive when appointing questioned ministers, but attributed the inability to find suitable officials to the high number of requirements that are demanded. 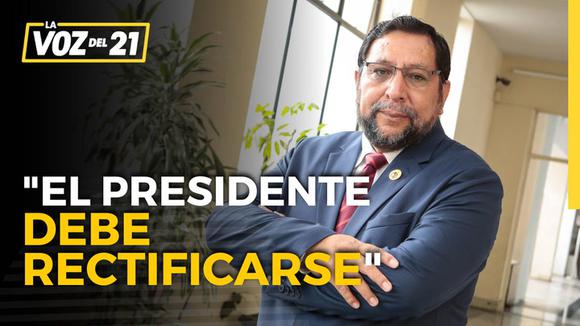 Baltazar Lantarón talks with Perú21 about the conflict in his region over Las Bambas.

Modesto Montoya on possible censorship of Aníbal Torres: “They place Peru as an unviable country”

The Minister of the Environment, Modesto Montoyasaid that Congress is

Santo Domingo.- The elections at the Autonomous University of Santo

$ 100 per vote, insults and gender violence: the nine ethics cases that the FA will deal with

$ 100 per vote, insults and gender violence: the nine

“To the Venezuelan people who like to be on the

Presentation. Hernando Cevallos officially launched his political organization Movement for Popular Unity. From the city of

Arequipa: The dead rise to 7 in the mining center of Atico

The sub-prefect of the province of Caravelí, Olga Carita Hancco, confirmed today that there are 7

10 basic facts about the sixth withdrawal of the AFP

The sixth withdrawal of the AFP it has been approved, published and is underway. Soon members

In the same conversation on November 4, 2021, produced in the department of the former Minister