Peruvians begin to pay the consequences of having as president of the Council of Ministers a person opposed to mining investment. This was evident yesterday with the dollar rise and the fall of the Lima Stock Exchange (BVL), after the premier Mirtha Vásquez announced the weekend the closure of four mines: Apumayo, Breapampa, Pallancata and Inmaculada.

The exchange rate had a bad day since the beginning of yesterday morning, as it started the day at S / 4,020 in the interbank market, above S / 4,009 on Friday.

The foreign currency could have appreciated more, but closed the session at S / 4,011 thanks to the intervention of the Central Reserve Bank (BCR), which put a brake on the rise by selling US $ 5 million. The entity also placed one-year exchange swaps for S / 172 million.

SIGHT: Government plans to announce measures on mine closure in the coming days

The impact on the BVL was even more evident, since the General Index of the Lima square fell 1.46%, after being dragged down by the fall in the shares of mining companies. In this way, the sector index fell 2.88%. The others also followed him and ended the day with losses, except services and electricity.

Nevertheless, one of the worst consequences was taken by the Peruvian company Hochschild, owner of two of the affected mines: Pallancata and Inmaculada, both of silver and gold.

Early in the morning yesterday the value of the shares of the Peruvian mining company already suffered a fall that at its worst it was over 50%. However, hours later the loss ‘moderated’ and closed the day at -27%.

The event was reported by specialized agencies and media such as Reuters and the British newspaper Financial Times.

In the publication of the London-based outlet, an analyst from JP Morgan commented that the observed situation increases the “geopolitical risk for mining companies operating in Peru”.

Despite what was announced by Prime Minister Vásquez, President Pedro Castillo came out yesterday to testify to the media in Arequipa and assured that he respected private investment.

“I once again ratify the country’s guarantee commitment and promote private investment, including mining, respecting the current legal framework and legal stability (…). We want a solid mining sector, with investment that creates employment, “he said, coming into apparent contradiction with the closure of mines ordered by the premier. However, you cannot really know what the president thinks due to his reluctance to give interviews or press conferences.

They look for a solution

In the midst of the controversy generated by the outrage against the mining sector, which has even captured the attention of foreign media and chambers of commerce, the Executive called yesterday for a meeting with representatives of the mining activity to seek a solution to the problem generated from the PCM.

Among those attending the meeting were the president of the National Society of Mining, Oil and Energy (SNMPE), Raúl Jacob, as well as the vice president and executive director of the union, Pablo de la Flor and Magaly Bardales. The representative of Hochschild Mining, Ignacio Bustamante, and José Augusto Palma were also present. From the side of the Executive were the Prime Minister Mirtha Vásquez and the heads of Energy and Mines, Eduardo Gonzáles; of Economy, Pedro Francke; and Environment, Rubén Ramírez.

Sources of Peru21 reported that during the meeting, which took place and ended at night, no agreement was reached between the parties. However, they noted that “There was a cordial conversation and that there is a good will to solve this situation”.

“They are aware of the situation they have caused, but there is no agreement at the moment. New proposals are going to be discussed ”, the source told this medium, referring to the fact that the Executive and the representatives of the sector would still have to meet again to address a new approach regarding what was announced by the premier.

President Pedro Castillo had to quickly leave the restaurant where he had had lunch as the shouts of protest intensified.

It is important to differentiate the friendly, welcoming and positive message given by President Pedro Castillo at CADE. Everything was spoiled by the statements of Prime Minister Mirtha Vásquez, who in an unconscionable act appears to have boycotted a message that was designed to build trust. It is impossible for investors to have confidence without stability, predictability and transparency.

We are concerned about the loss of employment and well-being for Peruvians due to the decrease in the growth rate and the problems created by the economic reactivation. We need an unequivocal and explicit expression of the premiere on the subject (of the closure of mines), a tweet is not enough.

With this announcement, more than US $ 500 million in value of Peruvian companies that are publicly traded abroad have been lost because obviously investors react defensively with announcements like these. 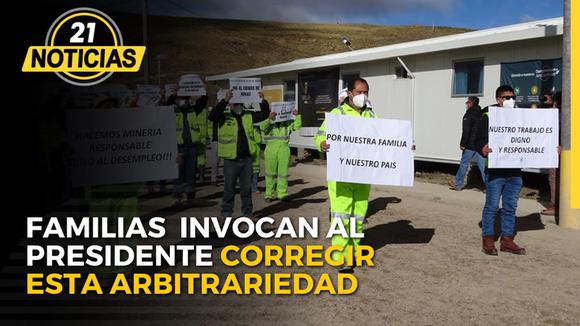 Public employees: The fight from within against the tyranny of Daniel Ortega

On Wednesday, March 23, 2022, accustomed to the monolithic position

Ambulance collides with taxi in Huancayo and leaves two injured

Nivia Rossana Castrellón: ‘One of the great challenges facing Panama is that it left the schools very alone’

Ambulance collides with taxi in Huancayo and leaves two injured

The head of the Ministry of Economy and Finance (MEF), Alex Contreras, reported that the conflicts