For the former Minister of Economy and director of Videnza Consultores, Luis Miguel Castillathe observation of the bill of the Congress what did the president do peter castleIt is clearly a setback for the country. The law establishes that those who have been convicted in the first instance for an intentional crime, either as perpetrator or accomplice, cannot be appointed as ministers.

What message does Castillo give to the country by observing the law?

I believe that the observation shows a disconnection between President Castillo and Prime Minister Torres in order not to face a harsh reality: the precariousness of public administration and the serious questioning of the ministers who accompany him in government management. Beyond the legal provisions is the reaction of Congress to a reality that we have never had, there were people who are unionized who do not have the slightest experience but not only that, who do not have the morality and probity to hold public office of such importance. I think the government is in another dimension.

Perú21TV spoke with Luis Miguel Castilla, former Minister of Economy and director of Videnza Consultores, about the law that President Castillo observed to hire ministers and deputy ministers without criminal or judicial questioning.

Wich is the way to go?

Congress would do well to insist, and if the avenue runs out, let the Constitutional Court decide the suitability and legality of this law. I think it is important to distinguish two things: the position of minister is a political position and the people elected may not be politicians, but if they surround themselves with good technicians, they could fill those gaps. Be careful, but a very different thing is that these people do not have moral principles and are full of judicial questions or have ventured into practices that are contrary to the law. That is why Congress insists on raising the fence. As a minimum requirement not to have records in office and this has been happening. Sometimes, it is not enough for Congress to control and censor ministers, because that takes time and meanwhile decisions in the sectors are paralyzed.

How does bad designations affect the State; inexperienced people with criminal and judicial questions?

Various things can be produced; while waiting for the minister on duty to leave, paralysis is caused in decision-making. This is an issue that affects investments, the provision of basic services for citizens. On the other hand, it causes an outflow of talent; People who are working, career public officials, who have credentials, obviously, are not going to want to get involved with what is happening, or get involved with a questioned authority. And a third element is that recruiting additional cadres is going to be very complicated. Who is going to want to enter the State to work if there are people questioned for terrorism or with judicial processes? Castillo’s signal is adverse and clearly shows the contempt that the Government has for the proper functioning of the State. It’s a step backwards in every way.

-The rule was approved by the plenary session of Congress, second vote, on January 13. There were 75 votes in favor and 43 against.

-Iran by insistence, as confirmed by Patricia Juárez, president of the Constitution Commission. 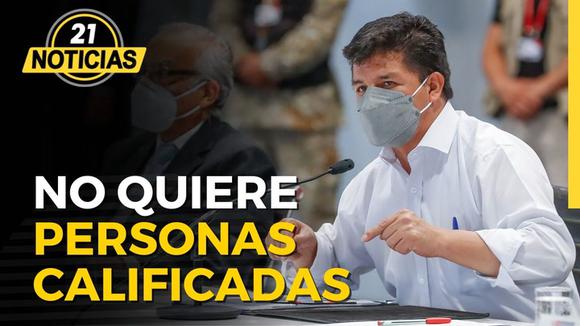 He observed the law of Congress that established requirements to occupy the positions of ministers and deputy ministers. In addition, a survey reveals that Pedro Castillo’s disapproval is 67%. Also, Alberto Fujimori does not have a date to be discharged. And, Russia attacks nuclear power plant in Ukraine.

The The death of Colombian soccer player Freddy Rincón has

River won and establishes itself as Group F leader

the country of shit

I have stolen the title from the American Henry Miller,

Mega-Sena accumulates and next contest must pay R$ 70 million

Regulated transport?: “There is an increase in demand, but not in supply,” they allege

Easter holidays: the list of holidays and non-working days of 2022

If you already have your plans ready for this holiday by Holy Weekwhich is Thursday, April

Is a new withdrawal of AFP funds coming? The Committee on the Economy, Banking, Finance and

Secretary of Sutep after presidential signing ceremony of law on CTS to teachers: “It makes us laugh” | VIDEO

This afternoon, the president peter castle carried out an activity in which he presented and published

Ortiz: The relatives of the victims of the Alberto Fujimori regime do not act out of hatred