Yuri Flores, lawyer for Julio Gutiérrez Pebe, former member of the now-defunct National Council of the Judiciary, supports his client’s defense against the constitutional complaint for the commission of crimes of criminal organization and specific passive bribery. 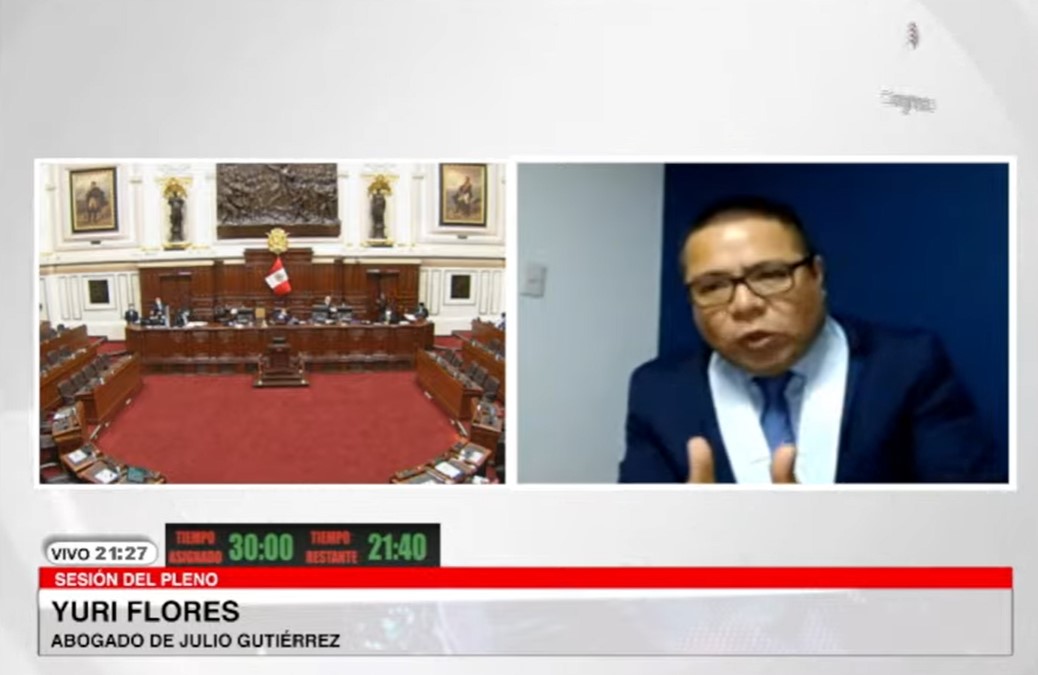 The former Supreme Prosecutor, Tomás Avelino Gálvez, exercises his defense regarding the complaint filed against him for the alleged commission of the crimes of criminal organization, illegal sponsorship, specific active bribery and others. 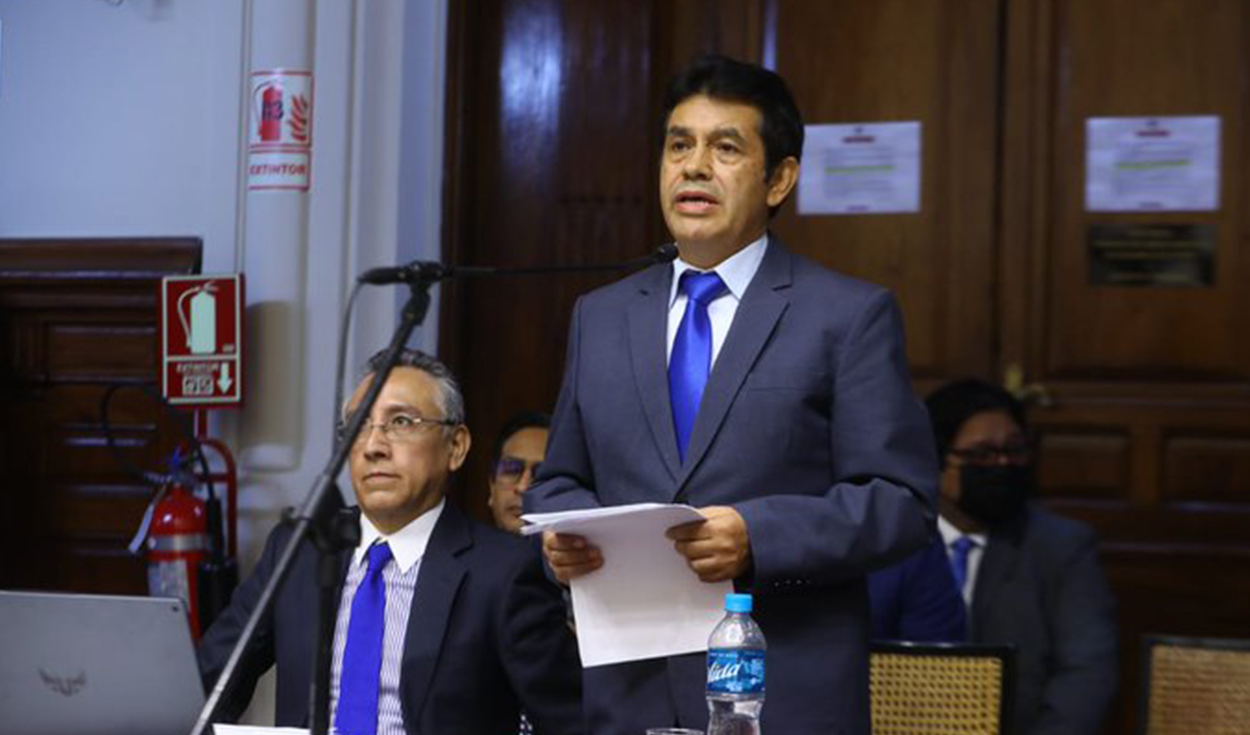 Former Supreme Judge Cesar Hinostroza offers his defenses against the constitutional accusation against him. He points out that the report presented by the SAC “has no legal basis.”

Likewise, he questioned the report presented by Rosío Torres and accused “being a victim of anti-Fujimorism.” Hinostroza Pariachi is reported for the alleged commission of the crimes of criminal organization, illegal sponsorship, specific passive bribery, and others.

“This is a persecution against me to get me out of the Judiciary and capture the institutions. The scandal of the audios was due to subordinate interests, they are victims of anti-Fujimorism because someone finds out that I had a conversation with a political party they hate (Popular Force ),” he said. 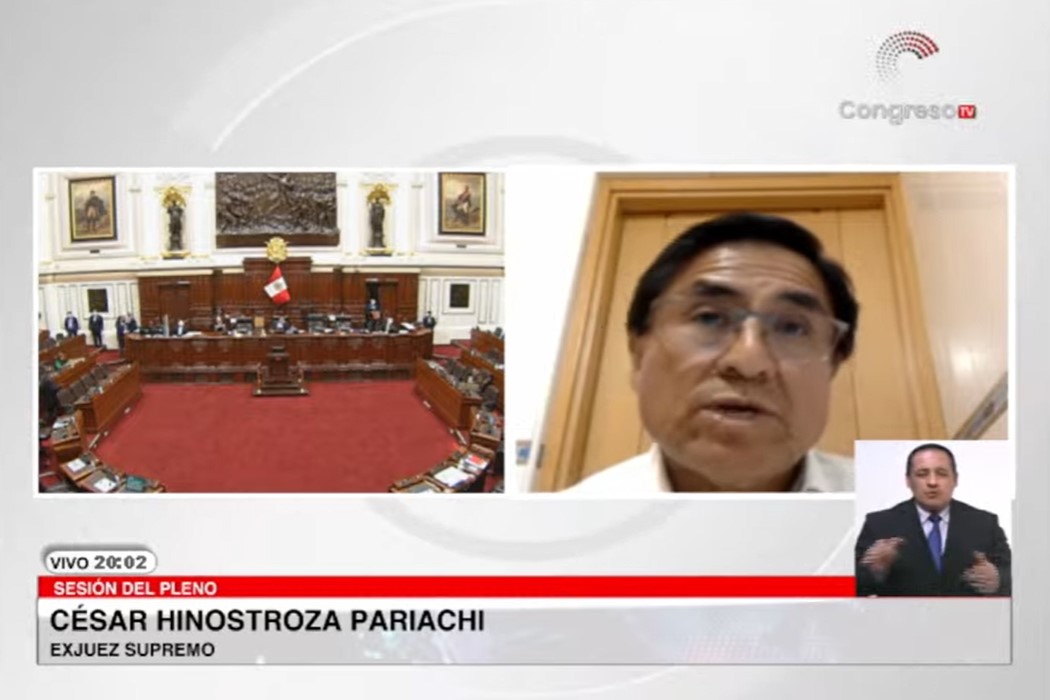 The head of the Subcommittee on Constitutional Accusations, Rosío Torres, exposes the reasons for the constitutional complaint against the former supreme judge, César Hinostroza Pariachi, accused of being the leader of the Los Necks Blancos del Puerto criminal organization.

The former prosecutor of the Nation, Pedro Chávarry, was saved from being disqualified for 10 years from exercising public office with a vote of 55 in favor, 26 against and 6 abstentions. More than 55 votes were required, so the report was sent to the archive. Previously with 53 votes in green, the Plenary agreed to vote on the complaint despite the resistance of groups such as Fuerza Popular and Renovación Popular.

With 53 votes in favor, 18 against and 9 abstentions: the plenary session of the Congress of the Republic approved the constitutional complaint against the former National Prosecutor, Pedro Chávarry. With this, it is proposed to disqualify him for up to 10 years for the exercise of public function.

Fujimorismo announces that it will vote against denouncing Pedro Chávarry

Legislators Hernando Guerra García and Juan Carlos Lizarzaburu announced that the Fuerza Popular bench will vote against the complaint against Pedro Castillo, who is seeking to be disqualified for 10 years.

Congressmen from various congressional benches begin the debate on the constitutional accusation against Pedro Chávarry. The former magistrate is denounced for the alleged commission of the crime of personal cover-up, real cover-up and attack against the conservation and identity of the object.

Julio Rodríguez, lawyer for the former National Prosecutor, Pedro Chávarry, begins his arguments in defense of the former magistrate. The lawyer reads the statements of the accused given to the Public Ministry. The lawyer affirms that “there is no proof argument”. “No one has seen Dr. Chávarry enter the offices (of the prosecutors),” he said. 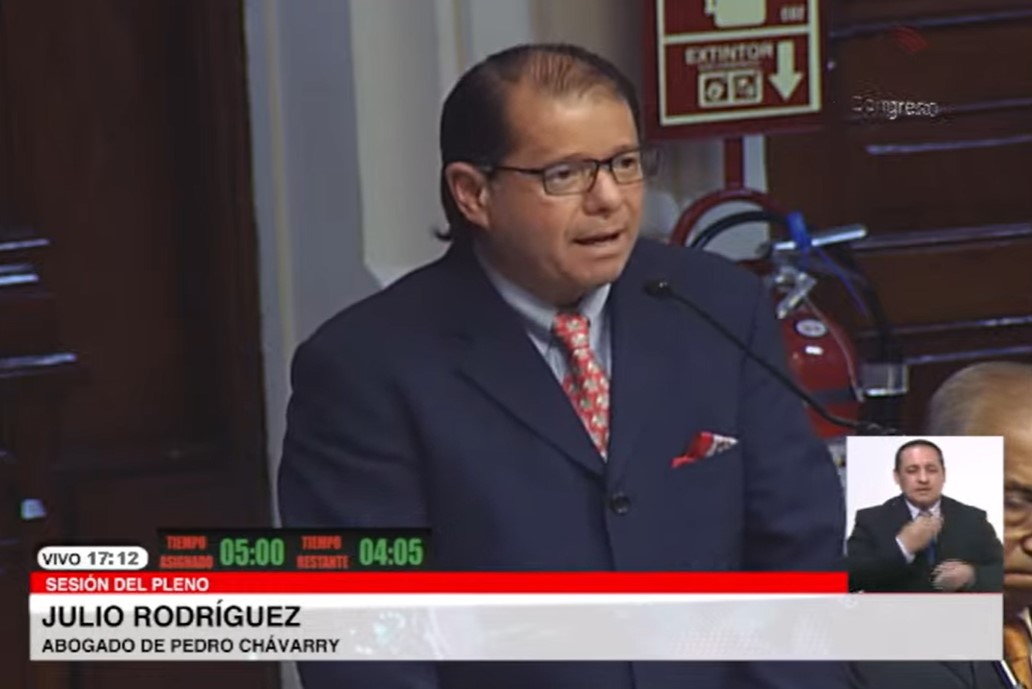 Without having evidence, Pedro Chávarry accuses the media of campaigning against him

The former prosecutor of the Nation, Pedro Chávarry, railed against journalists and some media outlets for conducting a political campaign against him. The former magistrate mentioned to La República, El Comercio, Canal N, ATV, RPP, América TV, among others, of putting together a “smear campaign against him.”

“They had that purpose: to remove me from office for having placed an order in the Prosecutor’s Office. They said that Chávarry should not be there. With great sadness I have to say what it meant to have to watch the television channels and see journalists distort my performance” , he expressed.

Likewise, Pedro Chávarry referred to the investigations against the former president, Martín Vizcarra. “Let’s hope he disappears,” he said.

Pedro Chávarry exposes his defense against a complaint by the SAC

The former prosecutor of the Nation, Pedro Chávarry, begins his speech in the plenary session of Congress this Wednesday, June 1. Faced with the SAC’s complaint, Chávarry said he was “surprised at the way in which the issue has been misrepresented.”

Likewise, he reiterated that he had nothing to do with the complaint against him. For its part, the SAC proposes that the sanction of disqualification for 10 years be imposed on him from the exercise of public function. 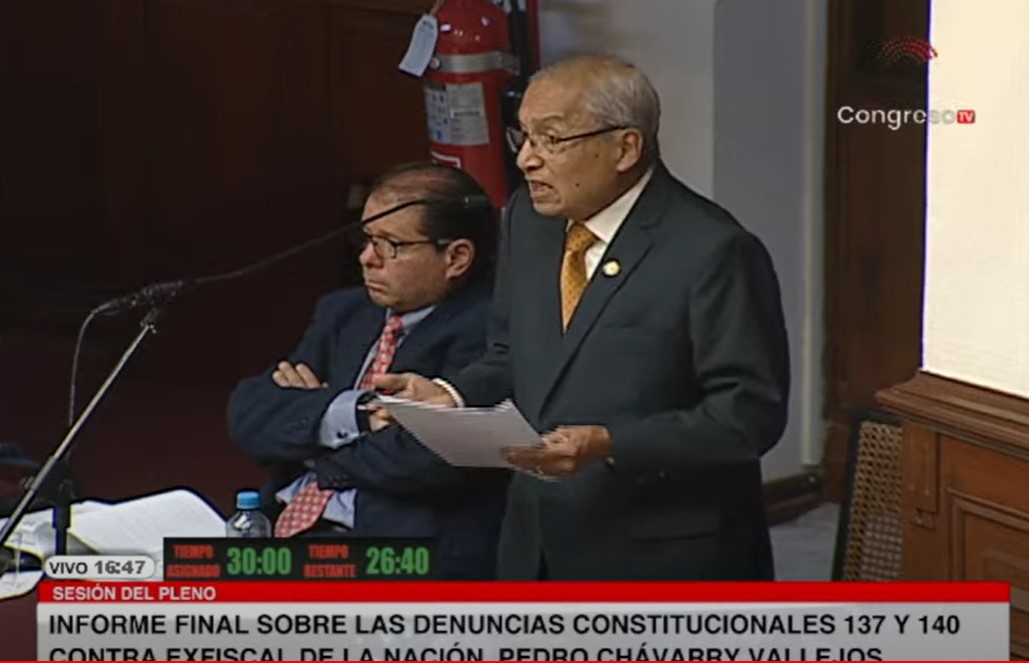 The head of the Subcommittee on Constitutional Accusations (SAC) of Congress, Rosí Torres (Alliance for Progress), supports the constitutional complaint against the former Prosecutor of the Nation, Pedro Chávarry.

The former Supreme Prosecutor, investigated for being part of Los Necks Blancos del Puerto, is denounced for the alleged commission of the crime of personal cover-up, real cover-up and other.

#Congress Plenum I The final report of the Constitutional Complaint 137 and 140 is supported, against the former Prosecutor of the Nation, Pedro Chávarry, for the alleged commission of the crime of personal cover-up, real cover-up and others.

Former Prosecutor of the Nation Pedro Chávarry enters the Hemicycle

The former prosecutor of the Nation, Pedro Chávarry, enters the Hemicycle this Wednesday, June 1, before the Plenary Session of Congress in order to present his defense against the complaint of the Subcommittee on Constitutional Accusations.

The plenary session of Congress begins this Wednesday

96 congressmen registered their attendance at the plenary session this Wednesday, June 1. The session starts.

They take attendance list minutes before starting the plenary session

The head of the Board of Directors, María del Carmen Alva, has been taking the attendance list of the congressmen to start the plenary session of Congress this Wednesday, June 1. In parallel, the Constitution Commission of the Parliament is in session, chaired by Patricia Chirinos (Popular Force).

The purpose of the motion presented by People’s Renewal would be for the prime minister to attend the chamber to respond to the national representation on the constitutionality of the extension of the state of emergency in the face of the COVID-19.

It is also proposed that the interpellation to Torres Vásquez develops around the lack of response from the Executive regarding the parliamentarian’s request Jorge Montoya about the minutes of Minister council from March 1 to 5.

YOU CAN SEE: What are the former ministers of Pedro Castillo currently doing?

Plenary will see other topics

In the parliamentary agenda it is also contemplated to see the final report on constitutional complaints 137 and 140 against the former prosecutor of the Nation Pedro Chavarry for allegedly having committed the crime of personal concealment, actual concealment and attack against the conservation and identity of the object.

According to the document, Chavarry Vallejos would be accused by political trial, in his capacity as former prosecutor of the Nation, for being the author of serious infractions to the Constitution. In this sense, it has been proposed that he be disqualified for 10 years from exercising public office.

The Plenary will also see the final report of the constitutional complaint 141 formulated by the former prosecutor of the nation Zoraida Avalos against the former supreme judge Cesar Hinostroza and former members of National Council of the Judiciary.

YOU CAN SEE: Interpellation motion filed against Dina Boluarte

On the other hand, the opinion of the Consumer Defense Commission which proposes to modify Law 27261, Civil Aeronautics Lawwhich establishes compensation mechanisms for users of national and international air transport.

The plenary of Congress of the Republic meets this Wednesday

The administrator of Agricultural Bank (Bagricola), Fernando Duransaid that the

The General Directorate of Information and Police Intelligence investigates the

The National Anti-Drug Superintendence (Sunad) held a preventive event on

Specialists from the Decentralized Directorate of Culture of Cusco, on behalf of the Ministry of Culture,

OEFA fines Repsol S/ 460,000 for failing to rescue wildlife from the oil spill

Updated on 06/01/2022 07:28 pm The Agency for Environmental Assessment and Enforcement (OEFA) imposed a sixth

La Tinka this Wednesday, June 1: How to participate?

This Wednesday, June 1, the draw for The Tinkawhere a lucky person could have won the

Prices of menus in cevicherías have risen by 15%, according to Armap

Javier Vargas, president of the Association of marine and related restaurants of Peru (Armap), pointed out