This Friday, in the 1st Court in Administrative and Tax Litigation, in charge of Judge Romina Tesone, the second hearing will be held to revoke the measure of the Buenos Aires Government to prohibit the inclusive language in the schools.

The first was held on July 13, after different organizations filed an injunction with the courts to demand that the decision to ban the use of the inclusive languagesince not allowing this communication way represents a violation of fundamental rights.

The hearing will be held at 10:30 a.m. and those who presented the amparos against the prohibition of the use of the inclusive languagesince they must present their arguments against the measure and support how their rights are affected and violated.

In this regard, Celeste Fierro, an MST referent in dialogue with Telam, stated: “we hope, after the first hearing we had almost a month ago, that progress can be made so that the injunction becomes effectiveat least, until the substantive resolution is in place, so that there are no sanctions on teaching that uses the inclusive language“.

And he added: “we propose that there can be no prohibition, everyone can speak as they want and, fundamentally, this resolution goes against the National Law on Gender Identity and violates fundamental rights such as freedom of expression.”

It is expected that the hearing will also be attended by the Buenos Aires legislators of the Frente de Todos Laura Velasco and María Bielli, who also filed an amparo action before the justice system against the measure.

While justice resolves the case, the organizations also requested that the ban be interrupted until the legal case is resolvedsince the measure came into force as soon as it was announced.

What happened at the first hearing

During the first hearing, both the representatives of the Ministry of Education of the City and the references of the LGBT organizations that presented the amparo were summoned. 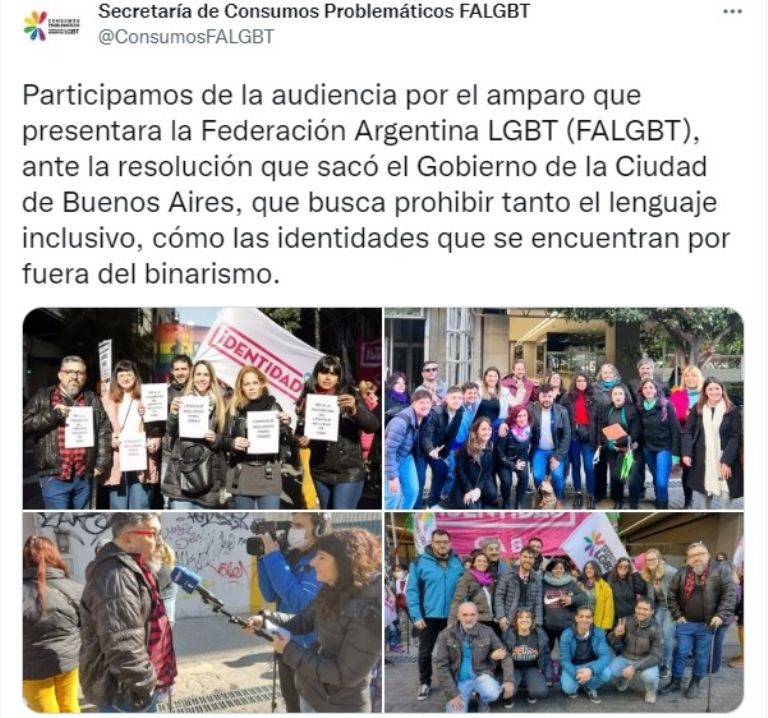 There, both parties presented their positions on the prohibition of expressions as the “e”, the “x” or the “@” in official and academic communications in schools. Now, after listening to those involved again, in individual hearings, the judge must make a decision on the matter.

Lights of hope: this is how Bogotá lived the night of candles

“I think it is a very beautiful tradition and It’s

Banxico makes the new SPEI rules more flexible; listened to proposals from sectors such as fintech

A few days after the new rules of the Interbank

What are the new immigration measures in Costa Rica that could affect Nicaraguans?

Rodrigo Venegas resigned and ceased to be Blooming’s coach

Consulate General of Colombia in Caracas invites the inauguration of Petro

Photo: German Pomar. The center and north of the country continued this Thursday morning under a

Industrial activity grew 3.5% in October compared to the same month in 2021 / GBA Press

Photo: AFP The president of Mexico, Andrés López Obrador, attributed this Wednesday the departure of his

Heat wave: how will the weather be in the provinces this long weekend

From Thursday the 8th to Sunday the 11th of this month, two events will take place,