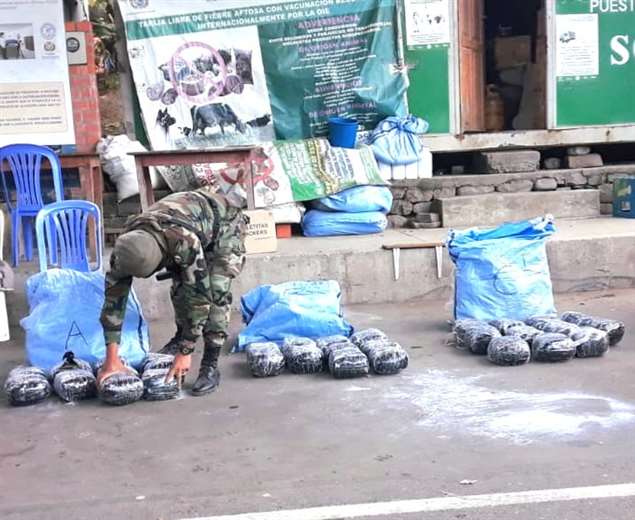 Personnel from the Bolivian National Customs (ANB) seized 31 drug packages that were camouflaged in three jutes that carried detergents. These wrappers were transported in a public minivan from the city of Tarija to Bermejo.

The motorized vehicle, with control plate 2587 YAE, was intervened by the staff of the Strategic Operational Control Unit (UCOE) at the ‘La Mamora’ Inspection Post. When checking each of the goods, The bag caught our attention, due to its sewing method, since it was highly reinforcedas if it were a bundle of used clothes.

At the moment of verifying its content, white powder began to fall; however, realizing this the owner tried to bribe the customs staff, being flatly rejected and between deceptions he fled. For their part, the technicians cut the three jutes, removing the detergent bags first and the black wrappers almost last.

Of the 31 packages, 10 were in jute, the same figure in the second package and the rest, 11 wrappers, in the third. So far, each one was valued at 1,000 bolivianosaccording to the Regional Manager of Tarija, Lourdes Aldana.

Finally, at 07:00 hours, the members of the Special Force to Fight Drug Trafficking (FELCN) arrived to carry out the field test.minutes later they certified that it was indeed marijuana.

In Tarija they seize 31 drug wrappers camouflaged with detergent

New section inaugurated on the Vía al Llano is the most modern work in the country: president of the ANI

He added that related to the Chirajara bridge, and this

Madrid Spain.- The Assembly of the Cuban Resistance (ARC), US

Oriente Petrolero and Royal Pari open the third date of the Clausura tournament, this Friday

Oriente Petrolero and Royal Pari will meet this Friday, starting at 8:00 p.m., at the Tahuichi