The first time I set foot in Madrid I got a tremendous scare. I arrived impoverished. The summer of ’93 —the full Special Period— promised to be heartbreaking, like this one. I was hungry and scared of advances in technology that, at that time, had not yet exploded in the national environment. I remember that he had a particular aversion to the keys. To all of them, to those of the public telephones, to those of the sound equipment, the computers. I didn’t want to touch anything because I thought I might break it. And he was hungry… a hunger like no other, deep, embedded in his stomach.

I went into a cafe with an aunt, she looked me in the eye and asked me:
“Do you want a bun?”
I took a jump. I began to cough as if I had swallowed sand.
—No… Not at this time, in this heat, I don’t think so.

The bun was nothing more than a typical Andalusian roll, white, with little yeast and a dense texture. There is nothing that a Cuban can hear about the Sevillian bollito that does not cloud his head and alter his senses. The recipe itself makes my eyebrows rise, because its texture is the product of a short kneading and therefore its hydration is scarce. It could not be otherwise.

That dialogue made me blush. Sharing codes is not the same as handling them unilaterally. My hostess also told me that the bun in Spain is eaten with milk.

“And with coffee with milk?” I was asking to cool the air…
—And the montaditos are made with thin buns —the tapas, that’s what he meant.

In Spain there are not as many Latin immigrants as in Florida. Colombians, Venezuelans, Panamanians, are used to the bun. We call it tamalito. I don’t think it’s necessary to explain what a tamale is. In Brazil they call it pamoña, a name that also brings them. Less funny are the humitas of the Andes or the Venezuelan hallaquitas.

But Miami is also full of Cubans. Just as the buns come out of the oven, pressed together, on large pallets, Cubans come in everywhere, at all times. Friends and relatives take them out for a walk, they take them to the thousand and one food places that the city has. And they are “ice” with the portions. To eat and to take away. For the first time, smells of tacos and tortillas, of nachos, burritos, emerge everywhere. Further, the ají de gallina, the causa from Lima, the incomparable paisa tray and the feijoadas, the moqueca, the tacaca and the churrasco.

And they leave full, sighing for everything they have lost and one fine day they pass in front of the Narcobollo del Doral and their eyes open wide. A Colombian restaurant whose name seems to contain all the pleasure that a newcomer can imagine. 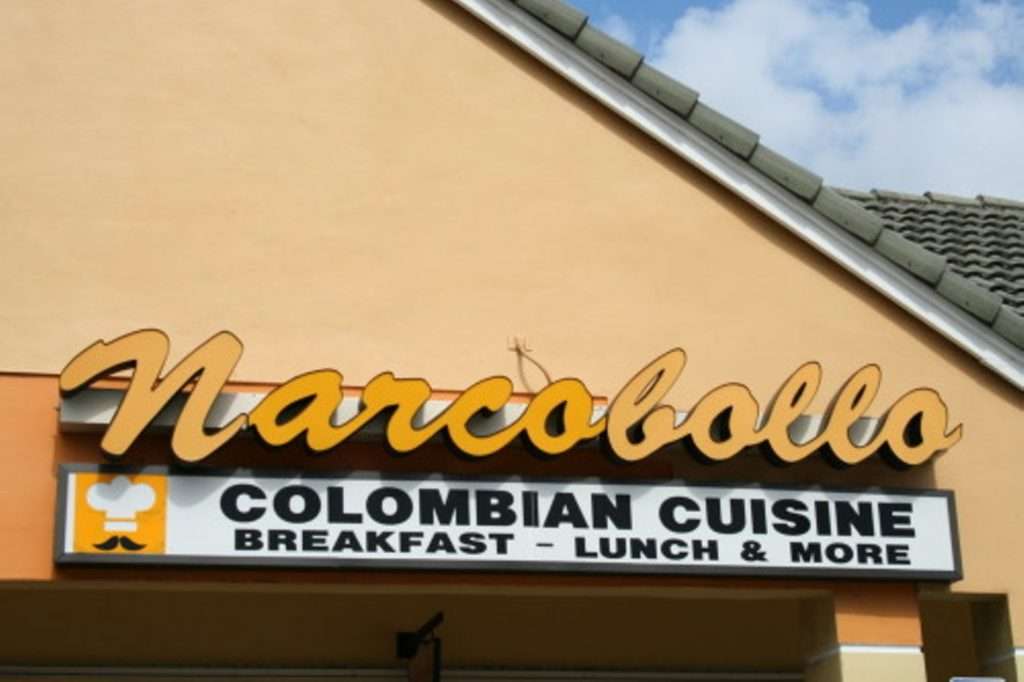 As in these parts everything that is not prohibited is allowed, it is customary not to be surprised by anything. Everyone gives their restaurant the name they want. It gave me a lot of grace. But I got past the “Who can think of?” pretty quickly. to “Why not?”.

Since I am not Colombian nor do I know the subject, I will assume that for its countrymen public it is an inoffensive name. And it’s not exactly the bun that keeps me up at night, referring of course to the dense and dry dough of an unfortunate kneading. But the “narco”. Because narco sounds like narco. To narcotics and dealers who manage them. It smells intensely of drug trafficking because I don’t think it refers —and here the back of the Andalusian bun appears— to the Spanish rap group of the same name, also from Seville, which indulges in “psychotropic experiences and wild nights”.

What I do not doubt is that for a person far from the customs of the south, like the Cubans who pass through the 79 and 25, it is particularly striking. A bet of visibility. I try to relate the two concepts, the “narco” and the “bun”, find a common place for them. The drug is inhaled violently, while the smell of the Sevillian bun slowly. Both unleash euphoria, both leave us crushed in the long run, they give us ultimate sleep. For that threshing we will not reach the appetite.

They are direct paths to past experiences. Since I don’t have the culture of going to a bakery for buns, he doesn’t call me. I respond to other stimuli. I would prefer other names. As a customer, I don’t even feel like showing up at the door. The spirit is in clear retreat. Like the foolishness and the guanajada. Innocence continues to guide some, certain generations.

Bollo is also, finally, —and almost nobody knows this— a funny character from the Germanic forest who seems to make fun of my reflections.

—Bollo get rudern, Bollo is here!

The first time I set foot in Madrid I got

Arrivals of Cubans to Nicaragua increased more than 1,000% with the visa exemption

Nicaragua’s visa exemption to Cuba caused an increase of more

On January 21, May announced at a press conference in

Movistar Companies announced the launch of its ‘Innovation Academy’ for

Arrivals of Cubans to Nicaragua increased more than 1,000% with the visa exemption

Daughter of Jeanine Áñez: “My mother is the victim of a political lynching”

ROMA, Italy.- “My mother has suffered a political lynching,” affirmed the daughter of Jeanine Áñez Chávez,

Fire of great proportions suffocated in eastern city of Cuba

Madrid Spain.- The constant blackouts in recent months, unsustainable for the people of Cuba, have led

A man living in Hialeah, a city in the county of Miami-Dadewhich supposedly ripped off more