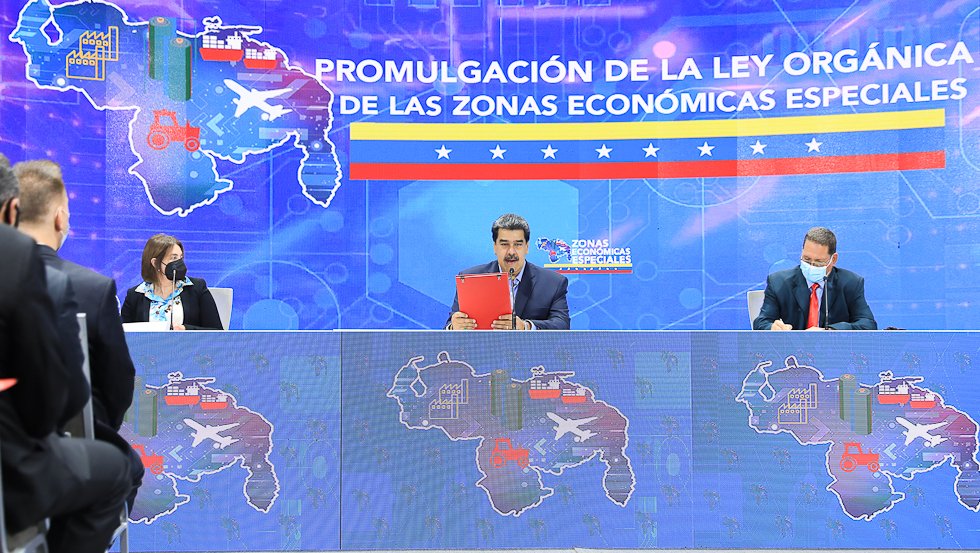 The possibility of negotiating with Chavo-Madurismo the minimum basis for an agreement to overcome the terrible tragedy suffered by Venezuelans rests on the assumption that we can understand each other and that we are willing to do so, that we use words with the same meaning and refer to the same reality, even disagreeing on how to approach it. But such obviousness is not given.

If there is something that characterizes regimes of a fascist nature, it is their subjection to an alternative reality, built on the basis of symbols that serve to project a Manichean, moralistic vision of political struggle, according to which the good guys (“us”) confront the the enemies of the people – those who do not bow to the designs of the country declared by the leader – to ensure their necessary defeat. Hence the pre-eminence of military jargon, hostile conspiracies and the search for culprits. In the Venezuelan case, Chávez erected this false reality by invoking the struggle for independence, positioning himself as a kind of Bolívar revived and disqualifying all who opposed him as “traitors.” Hate campaigns led to the harassment and discrimination of these “stateless persons” and the progressive suspension of their rights. There was absolutely no interest in getting along with them; they had to be crushed.

But this is known history. The abandonment of “21st century socialism” with the lifting of controls, the dollarization of transactions and certain privatizations, would it not indicate that we are, today, facing a different reality, which allows us to think that, finally, the ruling party begins to understand the reality of the country? But there is Diosdado Cabello, vice president of the PSUV, picking up the habit of the nefarious Motta Domínguez, of accusing, now not the iguanas or a sniper for the failure of the electrical service, but the US government for the rupture of a gas pipeline. The Minister of Interior Relations, Justice and Peace, Remigio Ceballos, is annoyed by the denunciation made by Valentina (brave!) Quintero of the collection of rattles by the military in the checkpoints, a complaint repeated countless times by farmers from Táchira, ranchers and merchants in general. He declares that it is irresponsible “to overshadow the police and military work framed in the professional ethics of those who are dedicated to the protection, defense and service to the Venezuelan people, putting aside their own security.” What country does this man live in? With the miserable salaries they are paid and the pattern exhibited by their superiors, why not extortion? The plundering of gold and coltan in Guayana, the negotiation of crude oil, the smuggling of iron and rebar, drug trafficking and much more, give an account of this supposed “professional ethics”. They also have complicit impunity by being extolled as heirs to the Liberation Army. And they believe it.

The problem is that the traitorous military that supports Maduro behaves, in reality, like an occupying army. Their employers, references and their contempt for the civil world, instilled by Chavez’s patriotic rhetoric, reflect the conviction of being owners of the country, anointed by the Homeland. They remain anchored in this retrograde and primitive vision because it absolves them of their outrages. It also protects its patrimonial claims as the backbone of a system that plunders the nation. Where are the institutional safeguards that limit the abuse of those who have the power of arms? How to put an end to their arbitrariness in border areas, in Guayana? And the torture in the DGCIM and the Sebin? Is it part of the “protection, defense and service to the Venezuelan people”?

But, some seem not to be anchored in the past. The very protected by this gorilla, Nicolás Maduro, announces opening measures to attract investment. He breaks the spell that bound him to the Spanish charlatan, Serrano Mancilla – the one who had convinced him that the monetary financing of spending was not inflationary – to first suspend price controls and allow the free circulation of currency. And, to give them content, he drastically contracts public spending, in the most rancid neoliberal sense, and suffocates credit with prohibitive reserve requirements to contain hyperinflation. And he combines the above with the burning of scarce currencies to stabilize the price of the dollar.

The private economy could not help but respond to this small respite. Excited, Maduro is now launching a brochure announcing the wonders that await whoever invests in the hydrocarbon sector. Except for the terrible taste of naming the Orinoco Oil Belt after Hugo Chávez Frías, it is surprising that it projects the image of an integrated industry: deposits, gas pipelines, crude upgraders, oil pipelines, refineries and associated petrochemical companies, operating in unison, without problems. And with the largest proven reserves in the world. The pamphlet culminates with a series of scattered incentives accumulated in different legal instruments approved by Chavismo, including a “(un)constitutional Law on Productive Foreign Investment” approved in 2017 by the infamous constituent assembly. It closes with allusions to the Law of Special Economic Zones and a strange reference to the “Anti-Blockade Law” as a “protection mechanism for public assets and for the country’s partners and investors” (!). Everyone knows that this law was passed to evade controls and accountability by privatizing, under discretionary confidentiality conditions.

In short, we are facing an oppressive oligarchy whose military component continues to see Venezuela as its private hunting ground, while Maduro tries to change the narrative to attract investment. Break with the past? The pamphlet referred to betrays itself with a full-page photo, at the beginning, of a visionary “eternal commander” looking into the future, accuses the sanctions imposed by the United States of the deterioration of PDVSA, and repeats emblematic phrases of the Chavista plans (“Suprema Happiness of the People”). Maduro is going to have to go further if he really wants to attract investment. Or is it just a temporary file to solve cash problems? Facts are worth more than words. Guarantees, bilateral / multilateral investment agreements, financing, the only ticket office offered, timely response from the Public Administration and, of course, reliable public services – water, electricity, gas, security, road infrastructure, ports and airports. Incompatible with the system of plunder that has so far served as the basis for the support provided by traitorous soldiers, sheltered in revolutionary myths. The authenticity of the “normalization” boasted by Maduro is put to the test.

It is possible that the dynamics unleashed by these liberalization measures, until now incomplete and unconnected, could take shape in aspects of an institutional framework favorable to private initiative and this will allow taking advantage of the enormous potential existing in the country so that Venezuelans can conquer, for themselves. means for a decent life. But the interests entrenched in the existing system of plunder will be reluctant to relinquish their privileges. Many take refuge in the imaginary constructed by Chávez to ignore all pressure for change.

It is up to the democratic forces to take advantage of the promotion announced by the government to collect the people’s aspirations for improvement and press for the realization of the reforms implicit therein. And beware, if Maduro is sincere, he most likely wants to go towards some form of the Chinese model, with centralized control and restricted rights. And he would do it slowly, to avoid affecting interests. There is nothing to indicate, so far, that what has been announced will result in an expansion of the civil and political rights of Venezuelans and the return to an eventual rule of law.

There is no substitute for a majority democratic force, consistent with a unitary political platform for change, to force, as soon as possible, the conditions that allow us to get out of this tragedy.

The entrance Can we understand each other? was first published in THE NATIONAL.

Can we understand each other?

The possibility of negotiating with Chavo-Madurismo the minimum basis for

Paulistanos have until Sunday to visit Portinari’s exhibitions

Next Sunday (31) ends an exhibition of reinterpretations of works

Report two auxiliaries injured by harassment at the Police substation in Betulia, Antioquia

authorities of the municipality of Urrao They confirmed that around

The Cuban Arley Calderón enlarged this Sunday the harvest of

Paulistanos have until Sunday to visit Portinari’s exhibitions

According to the OVP, the brawl began due to the alleged rejection of the inmates of

A total of 16 subjects, members of three cells of the Tren del Llano criminal organization,

PSUV denounces that the US wants to steal Venezuela’s resources

The leadership of the United Socialist Party of Venezuela (PSUV), denounced this Monday that the interests

Although a decision has already been made about the merchandise that was on the plane, the