The head of Parliament, María del Carmen Alvasaid that he hopes that President Pedro Castillo behaves like a “democrat” and does not try to close Congress, as stated by businesswoman Karelim López.

“It’s unfortunate to hear that, but let’s hope that’s not the case, let’s hope that the president behaves like a democrat, as he should, he has been elected in a democracy, and has said that he respects the constitution, so let us hope that he keeps his promise”, manifested.

LOOK: Walter Gutiérrez submitted his irrevocable resignation from the position of Ombudsman

Alva Prieto’s statements were given to the Congress Channel, from the Puente Piedra district, where he went to visit the Association of Common Pots.

Alva on statements by Karelim López: “We hope that the president behaves like a democrat”

“One of the things that the president very lightly said (to Pacheco): ‘I am not worried about Congress because I close it and period‘” Karelim Lopez said.

At another time, the head of parliament asked the Government to regulate the law that legally recognizes common pots on a national scale and that guarantees state financing.

Along these lines, he greeted and recognized the mothers of the common pots who with drive and leadership came forward during the pandemic, for which he wished them the best wishes on the occasion of Mother’s Day, which will be celebrated on Sunday, May 8. . 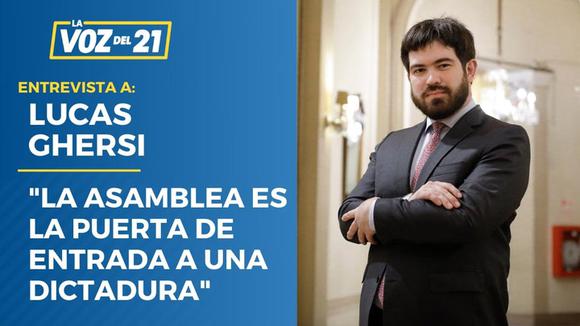 Lucas Ghersi: “The Assembly is the gateway to a dictatorship” #Interview We spoke with the lawyer Lucas Ghersi who affirms that Parliament is “Pedro Castillo’s accomplice by prolonging the inertia in which the country finds itself”. This is #LaVozDel21 on #P21TV

Alva on statements by Karelim López: “We hope that the president behaves like a democrat”

“It wasn’t a madman they killed,” says David’s friend

David of the Saints He worked in a call center

President of the PIT-CNT, Marcelo Abdala. Photo: PIT-CNT. This Wednesday,

Can Colombia fill the void left by Russia and Ukraine in the markets?

The absence of Russia and Ukraine as energy and food

“It wasn’t a madman they killed,” says David’s friend

RMP on Pedro Castillo’s thesis: “It is the Government of plagiarism”

Las Bambas: “We are not anti-mining”, affirms Huancuire community leader

Javier Ochoa Núñez, leader of the peasant community of Huancuire, in the Apurímac region, demanded that

Exemption from VAT on food: rule could make products more expensive, according to the CCL

Pedro Castillo LIVE: they denounce that most of the president’s thesis would be plagiarized

The president of Peru peter castle must clarify a new crisis in his management, after assuming