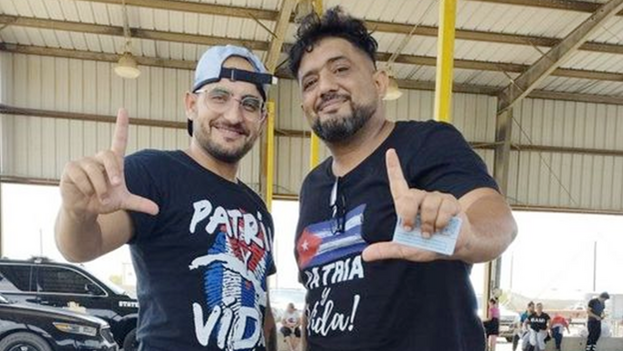 “Family, we are already in the United States,” with that phrase the Cuban doctors Alexander Pupo and Alexander Jesús Figueredo reported this Thursday through Facebook that their three-month journey is over. The doctors were forced to leave the island after being harassed by the regime.

“I am free and my Cuba will soon be free to serve my people again,” Figueredo said. He clarified that his arrival in the United States was due to the fact that he “came fleeing from the Cuban nightmare” and not in search of the American dream.

“With me a little bag with dreams that I never achieved on the island, some papers, a cell phone and my medical stamp, the one that one day treated thousands of patients,” explained the health worker who lost his job because of his outspoken stance against the government. “Nothing here works for me but I’ll have it as a reminder that one day I was #108356.”

According to figures from Department of Customs and Border ProtectionIn the nine months, 157,339 Cubans arrived by land to the United States. Of these, in the month of June, 16,170 requested political refuge.

Just last July 7, Pupo made known the dangers and insecurity faced by migrants on their journey to reach the United States. “Guatemala has been a total hell,” said the doctor in a video that Posted on your Facebook account. “We had to hide from the police again,” she said as she watched a group hide behind the brush.

“With me a little bag with dreams that I never achieved on the Island, some papers, cell phone and my medical stamp, the one that one day treated thousands of patients”

Pupo reiterated that “in Guatemala the immigrant lives with the ever-present fright. The police mainly persecute Cuban emigrants to extort money from them.”

The health worker indicated on that occasion that “the coyotes they looked bad” and, because they did not pay the bribe to the officers, the group they were traveling with had to enter a mountain.

“We have had to practically become soldiers in here: jumping fences, hiding and trying to avoid all dangers” among “pica pica” bushes, detailed the doctor. “It seems that the frights are never going to end.”

Pupo recalled that from Nicaragua, his journey to the United States had been one complication after another. “Incredible what has happened to us in these last few hours: going hungry and in need… I would not recommend this to anyone.”

Before this publication, Pupo had confessed a 14ymedio that they have had to experience the most difficult emigration: without visas, without the support of diplomats, practically without money. “And there were those who said that we were financed, that we were well paid by the CIA,” she added wryly.

After a three-month journey, two doctors harassed by the Cuban regime arrive in the US

“Family, we are already in the United States,” with that

Santander Mexico has appointed Philip Garcia Ascencio as its new

In the act of adulation of the dictator Daniel Ortega,

This afternoon, the President of the Republic, Laurentino Cortizo, addressed

The United States Congress rejected, this Wednesday, by 260 votes against 163, an amendment presented by

My vacations in Sancti Spíritus turned into an ordeal

I could not postpone my trip to the city of Sancti Spíritus any longer. After several

If any citizen of the Island hopes that the “new measures to recover the Cuban economy”,