After Lionel Messi, swept up in the Paris Saint-Germain debacle, it was Cristiano Ronaldo, a symbol of Manchester United’s impotence on Tuesday, who was deprived of the Champions League quarterfinals for the second consecutive year. The end of an era?

After leaving Juventus at the start of the season, eliminated by Porto in the round of 16 of the 2020-2021 Champions League, Cristiano Ronaldo still had high ambitions.

His return to Manchester United, a club in which he became known to the world in the early years of his career, and which is, like the Portuguese star in search of his lost glory, raised hopes that CR and the ‘ Red Devils’ would caress the ‘Orejona’.

But the inglorious elimination against Atlético de Madrid (1-1, 0-1) and the complicated situation in the Premier, with the ticket to the Champions League in question, make that scenario outdated.

Accustomed to attracting the spotlight, the 37-year-old Portuguese will also have to accept criticism, although other stars of the team such as Harry Maguire, Jadon Sancho, Marcus Rashford and Paul Pogba did not perform well either. 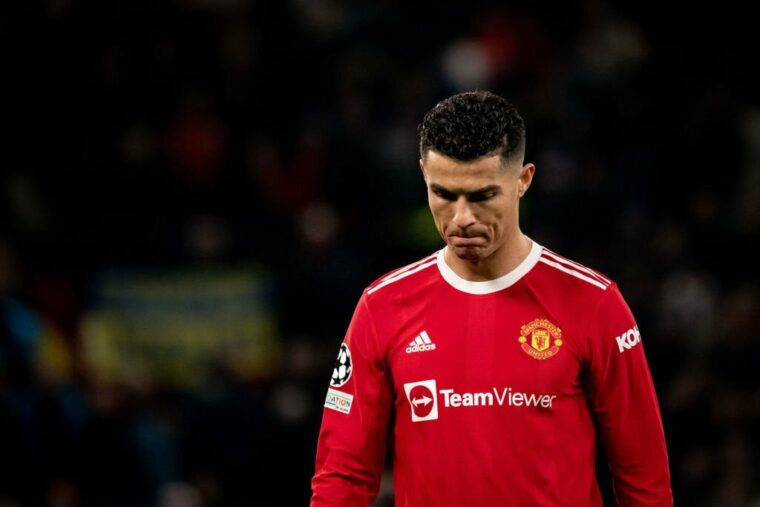 Cristiano’s Manchester was left out of the Champions League in its own stadium. (Photo: Getty Images)

For Messi (34 years old), the case is similar. After a pompous arrival in Paris, the story has turned out to be no fairy tale, with the seven-time Ballon d’Or winner being whistled at the Parc des Princes on Sunday in PSG’s first game after losing to Real Madrid.

“We all deserve the anger of the fans, not just Messi and Neymar”, Mauricio Pochettino defended him, but the numbers go the other way: his ten goal passes in Ligue 1 does not hide his balance of just two goals, a starving figure for the one that was ‘Pichichi’ of the Spanish League the last five seasons.

In the Champions League his figures improve a little (5 goals), but he had no impact in the double date with Real Madrid, even missing a penalty in the first leg.

– The Champions League is equivalent to them –

For the second consecutive year, the top eight European teams have neither Messi nor Cristiano Ronaldo in their ranks.

If Porto and Paris SG were the executioners of Juve and Barça last year, on this occasion they were two intimate enemies, Atlético, who Cristiano Ronaldo did so much damage with Real Madrid or Juventus, and the group white, which Messi faced so many times with the elastic culé.

This new disappointment may mark the end of a cycle in European football for two players in their late thirties.

Three days after a hat-trick in the Premier, Ronaldo did not come close to scoring against Atlético. But without his 6 goals in the first 5 group games, the ‘Reds’ would probably have been eliminated even earlier.

As for Messi, since he won the Champions League in 2015, he has chained exits through the back door of the most prestigious European competition with a Barça in decline: “comebacks” suffered against Roma in 2018 and Liverpool in 2019, a humiliation against Bayern Munich in 2020 (8-2) and another against PSG a year later (4-1).

At the moment it does not seem that their new destinations have been favorable to them: ‘CR7’ opted for a club that has been without titles for five years and Messi for another in whose merits in the Champions League only the final of the 2020 edition appears.

– What future awaits them? –

The probable departure of Kylian Mbappé, whose contract expires in June, could cause a change in the hierarchies in Paris.

The Argentine will no longer have the excuse of integration or the coronavirus (which he contracted at the end of the year parties). The former Barcelona player could become the No. 1 of a remodeled attack, with the possible departure of Ángel Di María and the eventual arrival of another superstar.

As for Cristiano Ronaldo, he signed for two years, with an optional third, and with United with a lot of work ahead of them with their first team, the only thing clear seems to be the fact that the season will leave CR7 less leader of the group than when he arrived. .

ASEP says that in Panama there is a guarantee of legal certainty, after Digicel’s request to be liquidated

After the company Digicel Panamá S,A requested its voluntary liquidation

The Province of Buenos Aires makes the use of chinstraps more flexible: where it will not be mandatory to use them

Starting this Thursday, April 7, the use of face masks

The Strongest-Libertad (preview): minute by minute

The Senate confirms Ketanji Brown Jackson, the first black woman to reach the US Supreme Court

The United States Senate confirmed Ketanji Brown Jackson to the

Jorge Montoya will analyze the arguments of the Minister of Justice: “We cannot continue walking from end to end”

Ban by revocation of mandate: a "distraction" by Morena

A forgotten area in Capiatá

Marly Centurión, a resident of the Yvyraro 2 neighborhood of Capiatá, questioned that, for years, they

On Wednesday, Álvaro Grau, councilor of Asunción for the Patria Querida party (PPQ), denounced that the

Brazil confirms the first case of the omicron XE subvariant

According to the Ministry of Health, the new variant, which is a combination of the original

They rescue a jaguarundi and a coati in Concepción

At noon this Thursday, volunteer firefighters from Concepción rescued a “Moorish cat”, popularly known as “Jaguarundi”.