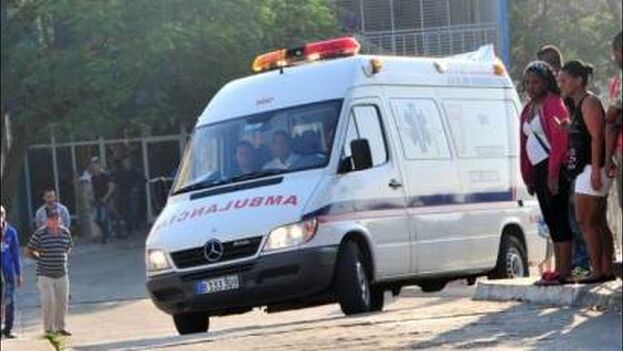 A 7-year-old girl was stabbed to death this Thursday in the vicinity of the Batey del Central neighborhood, located in the municipality of Vertientes, in Camagüey. Her mother, Yodeisi Fabelo Carballo, was seriously injured.

The attacker, nicknamed shot and whose real name is unknown, had been involved with Fabelo Carballo in a love relationship. “Until a few hours ago [Chupito] was reported on social media as a fugitive from the authorities,” reported the magazine’s Gender Observatory Tense Wingswho denounced the murder of the minor and the assault on her mother on her social networks.

hours before the announcement of Tense Wings, former official journalist Luis Enrique Perdomo Silva wrote on Facebook: “A subject, while trying to kill a woman with whom he allegedly had relations, left her 7-year-old daughter dead.” To this initial information, the feminist magazine added that the girl’s death had occurred to “harm the mother” and qualifies as a case of vicarious femicide.

Another organization that quoted to Perdomo Silva was the Cuban Women’s Network, although it did not confirm the fact.

In the social networks linked to the municipality of Vertientes, some users have provided additional information about the attacker. Several identify him with the name “Yosdenis” but do not know his last name. Another user, Evangelio Frómeta, assures that the aggressor is 30 years old and that, at the time of the murder, the girl’s father was present in the house. “He called the neighbor for help,” he said.

Neither the Camagüey authorities nor the Ministry of the Interior have offered any confirmation of the facts.

On August 2, the organization Yo SíTeCreo in Cuba reported that between January and July 2022, 24 femicides on the Island, one of them a vicar, and five attempted femicides. From those, 14ymedio has been able to document 19 cases with victims between 21 and 55 years of age.

The observatories of Tense Wings and YoSiTeCreo in Cuba began to include the cases of vicarious femicide in their records of sexist violence since last June. The purpose is to make visible the lack of protection of the children of battered women and where the perpetrators intend to cause harm to women, through harm to their descendants.

These organizations have taken Spain as a reference, a country that, following this protocol since 2013, has recorded 47 murders of minors that they classify as vicarious violence.

Given that there are no official records on cases of femicide in Cuba, the work of these organizations to define an exact figure is difficult. In 2016, Alexander Fleites Zamoraa resident of the South County neighborhood of Santa Clara, Villa Clara, was arrested for causing a fire in which his six-year-old daughter died and his four-year-old son was injured.

The authorities classified this fact as a crime of passion, despite the fact that Fleites no longer had any relationship with the mother of the children. The woman, for her part, alleged that she had been a victim of domestic violence and assault.

Another case that responds to the pattern of vicarious violence was that of Carlos Duviel Sánchez Estévez, 10 years old, murdered by his father in Caibarién, also in Villa Clara. The man had a history of sexist violence and was serving a sentence of attempted murder of the child’s mother. He was on probation and, after getting the teacher’s permission, he took his son out of school, took him to a secluded place and killed him.

Young people and unemployed, main victims of the montadeudas

Nicaragua registers 11.5% inflation in July, the highest in Central America

Rognoni updated that last week a ship that

Young people and unemployed, main victims of the montadeudas

A total of 497 doctors will be sent by Cuba to Calabria starting in September. This

In Artemisa, Cubans mobilize against the "remove current"

If Cubans have learned anything since the government began applying scheduled power cuts, it is that

(EFE).- The Cuban authorities concluded this Wednesday that it is “impossible to absolutely identify” the identity

The body of Cuban doctor Ernesto Oliva Legrá, murdered this Friday in the municipality of Ecatepec

Andy García Lorenzo, one of the imprisoned protesters on July 11 in Santa Clara, “is in