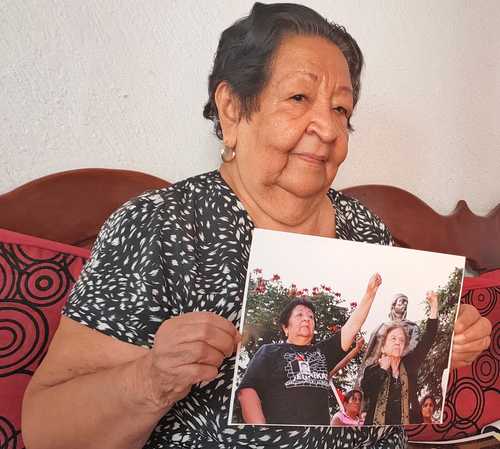 Chilpancingo, Gro., For me, Rosario was more than my sister, and I think also for all the compañeras, because thanks to her we also fight, because she taught us. We were ignorant, we were not prepared for these things, we did not know where to startsaid through tears Celia Piedra, co-founder of the Committee ¡Eureka!

Doña Celia, 78 years old, a native of San Jerónimo de Juárez, on the Costa Grande de Guerrero, assured that Rosario Ibarra I loved her and I love her very much, and always as long as I live I will remember her.

-Did they manage to rescue the disappeared?

-Yes, some who were in Military Camp number 1, like Elda Nevárez, Laura Gaytán Saldívar.

Elda, Laura and their brother Armando were from Chihuahua, they belonged to the Revolutionary Armed Movement; They told me that they went to train in North Korea, that they did not give them a passport to leave and that they secretly got married, and left. But when they returned, things went wrong. Her brother to date does not appearnarrated.

–What do you remember about Rosario?

He commented that he met Rosario Ibarra “when we began the fight, when (President) Luis Echeverría visited Atoyac de Álvarez, from there we began to fight.

“Rosario told me that once they were students from the Autonomous University of Guerrero (UAG) in Puebla and she asked them if they knew me and they said yes, and how would she go about talking to me. They told her to call the UAG and that they would be on the phone; and I went to the phone, and she told me ‘I want you to come to Mexico’, she had just arrived from Monterrey and she gave me the name of the neighborhood and the house number.

“When we arrived, he opened the door for us and my daughter Melina, who was 8 years old, hugged her and said ‘aunt, aunt’, and Rosario replied ‘I’m not your aunt, but I’m the sister of your mother with the same pain, so yes, from now on I’m your aunt’, and that’s where our friendship began”.

We were sisters of the same pain, recalls Celia Piedra

▲ We weren’t ready, but she taught us, says Committee

Cacica Wounaan, Aulina Opúa says that her priority is the adjudication of ancestral lands that are without title

He mentioned that on May 2 he will

Number of accidents at Easter was less than in previous years

The director of the Trauma Hospital and other authorities during

Anaya after brake to the electrical reform: "The next battle is to defend the INE"

Wall Street indices advance after negative start to the day

Major US stock indices are trading higher on Monday morning. The actions in wall street progress

▲ In Shanghai, covid tests continue on modules on public roads. Since last March, the city

Parity in elections 2022 For this year’s elections, the national political parties must nominate at least

China announced that its economy grew 4.8% annualized in the first quarter, this despite the confinement