Citizen Mario Núñez Mendoza had a very bad time last Tuesday afternoon, after being involved in an altercation with the driver identified as Rommel Mauricio.

According to Núñez Mendoza, he requested the Bolt service in Asunción, after a few minutes the driver fell into irregularities as the basic thing, not following the direction indicated by the GPS. This according to the complainant to charge more than corresponds to the initial location marked.

The driver entered a dead end and then took an unnecessary trip that could have been avoided by following the directions. Upon arriving at his home, the complainant marked the rate 15,200 Gs, a sum greater than the one he initially marked. 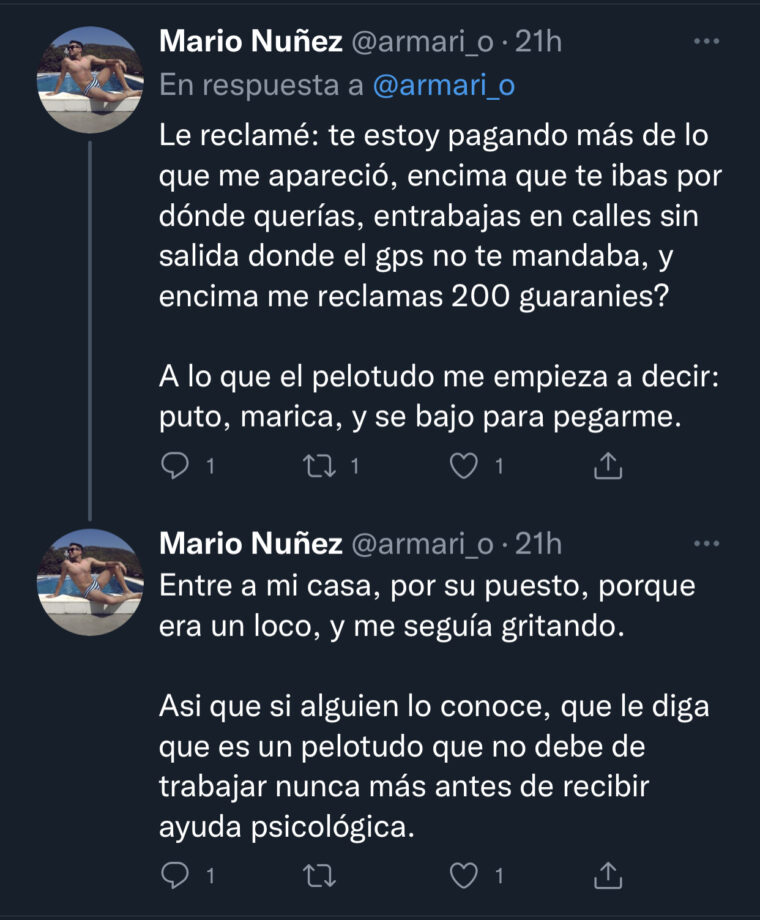 The citizen proceeded to get out of the vehicle and once outside, the driver got out of his vehicle and hurled insults at him and challenged him to blows in front of his house: “He begins to tell me you are a whore, a fagot, come here we are going to quarrel”.

The young man says that he ignored his insults and entered his house. He assures that at all times the driver “did what he wanted” and regrets the bad moment he had to go through.

“It seems to me that these events must be publicly denounced because there are people who are sure to have a worse time and there is no physical place to claim these things,” he says.

The complainant shared his case on social networks, by way of alerting the public.

The entrance They denounce Bolt’s driver for arrogance and homophobia: “You’re a whore! was first published in diary TODAY.

Kick back the resentment with the Netherlands at Messi’s party

The bad mood that was experienced on the field, and

Photo: file. According to the Center, The destination of the

Brazil lived a golden 2022 in paradesport

Employment: Nine out of ten Peruvians believe that finding a job is the same or more difficult than it was six months ago

In June, the ILO will present a preliminary report on the Financial and Actuarial Statements of the Social Security Fund

After saying goodbye to his followers in a live broadcast on his social networks, although without

Cristiano Ronaldo and a historic signing by Al Nassr

In this article, based on the latest reports from the National Police, to date, there have

In this article, based on the latest reports from the National Police, to date, there have