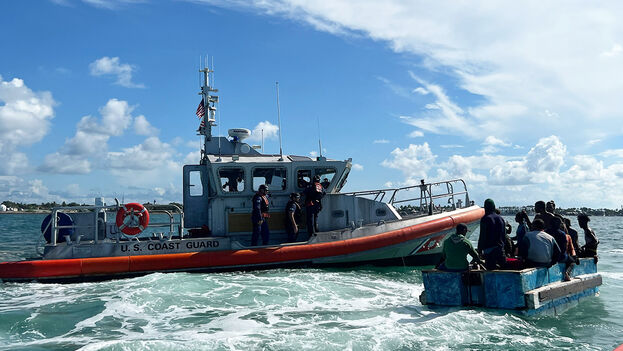 The United States Coast Guard repatriated this Friday aboard the Coast Guard Paul Valentine to 74 Cubans. The rafters were intercepted in different “rustic boats” between Tuesday and Wednesday in the vicinity of Key West.

Data provided by the US Coast Guard indicates that since October 1, 2021, crews have intercepted 3,067 Cubans. Just on Wednesday it was reported expulsion and return to the Island of 32 nationals.

“The possibility of being apprehended by Coast Guard crews while illegally migrating through the Caribbean Sea is high,” Lieutenant Simon Juul-Hindsgaul warned in mid-June.

The Coast Guard noted in a statement who made two interceptions on Wednesday, without specifying the number of rafters detained. The furthest was recorded 18 miles northwest of the Bahamas. A day earlier, he located two groups of rafters, one 20 miles from Playa de la Colonia and the other about 63 miles east of Marathon. All the rafters were given “food, water and basic medical attention,” he explained.

Since last May, due to the exodus of migrants, air and surface patrols have increased in the Straits of Florida

The Government of Cuba, among other arguments, attributes the increase in illegal migration to the United States to the validity of the Cuban Adjustment Act of 1966, which allows Cuban nationals to apply for permanent residence in the United States a year and a day of staying in that country. However, not all Cubans who manage to enter the neighboring country by sea or by land can apply to this regulation.

Last April, delegations from Cuba and the United States resumed their bilateral dialogue on migration issues in Washington, the first at a high level since the arrival of Democratic President Joe Biden to the White House.

In an attempt to try to prevent the exodus of Cubans, this Friday Lieutenant Mario Gil invited “families and friends to encourage their loved ones to find a safe and legal path to the United States.”

Gil shared a video on his social networks and recalled that “illegally migrating on boats without life jackets or safety equipment increases the risk of losing one’s life at sea.”

Since last May, due to the exodus of migrants, air and surface patrols have increased in the Florida Straits.

The US Coast Guard has repatriated 3,067 Cuban rafters since October of last year

The United States Coast Guard repatriated this Friday aboard the

The agency expects the country’s economic activity to continue to

Saint Joseph – This Friday, the headquarters of three important

Starting this Monday, May 11, the use of the mask

On a day like this Friday, after Havanatur announce tour packages facing the beginning of the

As July 11 approaches, State Security deploys its tentacles to neutralize any attempt to celebrate the

Cuba under the table: "First anniversary of 11J"

This fifth episode addresses the first anniversary of the 11J protests in Cuba: Guests: Dagoberto Valdés,

The scarcity, once again, of chicken in the markets and the high price at which it