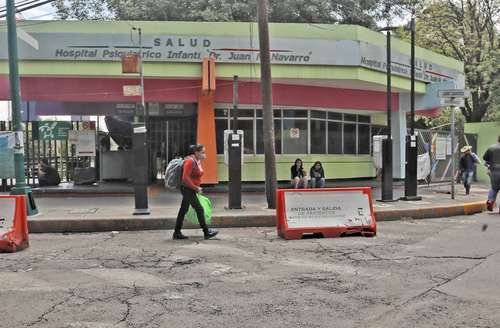 ▲ Mental health must be solved in the community and not by reinforcing psychiatric hospitals, assures Juan Manuel Quijada, general director of the Psychiatric Care Services of the Ssa. In the image, the Doctor Juan N. Navarro Children’s Psychiatric Hospital.Photo Marco Pelaez

In the midst of criticism for the reform of the General Health Law (LGS) in matters of mental health and addictions, Juan Manuel Quijada Gaytán, general director of the Psychiatric Care Services of the Ministry of Health (Ssa), defends that in the country stop building psychiatric hospitals and transform in what they should always have been: specialized care units, where there is training and researchwhich now does not occur due to its saturation.

It emphasizes that, following the model suggested by the World Health Organization (WHO), the treatment of mental disorders will be promoted from the first level, the care gap will be closed and the stigma against these conditions will be combated.

It underlines that Congress approved reforms to 18 articles of the LGS, which has already been published in the Official Journal of the Federation on May 16, to ensure that mental health and addiction prevention are priorities within health policy and ensure comprehensive, interdisciplinary, intercultural, intersectoral community care and with a gender perspective.

resolve in the community

Mental disorders, he says, must be identified and treated from the first level of care and in general hospitals, and even pediatrics.

For three decades, he explains, the WHO and the Pan American Health Organization (PAHO) have been fighting for the restructuring of the psychiatric care model. There is global consensus that mental health should be resolved in the community and not by reinforcing psychiatric hospitals and tertiary care.

He assures that the reform seeks to eliminate the psychiatric model of asylum, for which no more specialized hospitals should be builtwhich does not imply closing the 33 that exist today.

The reform indicates that the current psychiatric hospitals should progressively become outpatient centers or general hospitals within the integrated network of health services.

He explains that although criticism has focused on the misconception of closing psychiatric sanatoriums, “this is not the case. We are facing resistance from within psychiatry itself. It is from the union, with colleagues who have a more far-right position.

Those who grew up and were trained with the psychiatric hospital in some way do not understand how to exercise and express mental health in another way. They have worked there all their lives. The ad was misrepresented. Nothing is going to close nor are we going to leave anyone on the street. It’s this view that crazy people look ugly, we don’t want to see them. They have even assured that with this reform we are going to have more sick and homeless people on the streets, which is a completely wrong, conservative and right-wing vision.

In Mexico, one million 590 thousand 583 people admit to having a mental problem or condition, according to the 2020 National Population and Housing Census. However, it is estimated that out of every 10 patients, only two are diagnosed and it takes between four and 14 years to receive some kind of treatment. These figures could increase substantially due to the covid-19 pandemic, experts explain.

In Mexico there are 4,500 psychiatrists for more than 126 million inhabitants, that is, there are two specialists for every 100,000 inhabitants, when there should be between five and eight doctorsacknowledges Quijada Gaytán, after highlighting that of the few resources that go to mental health (2 percent of the funds allocated to health), 80 percent go to the asylum model, whose base is psychiatric hospitals.

The new care model, explains the federal official, We did not do it alone, specialists and civil society organizations participated, such as Disability Rights International, based in Washington, United States; Documenta, and Crazy Pride Network, among others.

Activist Ilse Gutiérrez, diagnosed with bipolar-type schizoaffective disorder and member of the Crazy Pride Network, explains that the reform was a work of more than two years in which civil organizations, legislators and experts participated.

We consider it an achievement. It is in accordance with the international framework of human rights, it is something transcendental. We are pioneers. We joined because we were fed up with so many abuses and violations of our rightshe points out.

Quijada Gaytán highlights that the new care model promotes the dignity and individual guarantees of patients, who will have the right not to be subjected to isolation or coercive containment measures that involve cruel, inhuman or degrading treatment.

The WHO defines mental health as a state of well-being in which a person fulfills their abilities and can cope with the normal stresses of life, work productively and contribute to their community.

Yet it is one of the most neglected areas of public health, with more than 75 percent of people with mental, neurological, and substance use disorders estimated to receive no treatment in low- and middle-income countries.

Reversing this diagnosis in Mexico, recognizes the specialist, is our challenge. We want to guarantee the well-being of the patient, but also to ensure that the study plans are reformed in the 135 medical schools in the country and the component of mental health and addictions is added. We seek that graduates of the health sector, including social work, have a profile to address mental disorders from the first level of care.

▲ Mental health must be solved in the community and

Nearly 23,000 people have welcomed Marc Anthony to Spain, the

Food crisis: will there really be a food shortage in Peru?

Peru remains in suspense after the arrival of a possible

The Ministry of Industry, Commerce and Mipymes (MICM) will keep

Lavaderos de Almoloya: from the rescue to a fleeting opening to tourists

A “recovered” tour The Lavaderos de Almoloya are located in the San Francisco neighborhood: the center

The Zuazua effect at VivaAerobus

Juan Carlos Zuazua, director of VivaAerobus for 12 years, likes to run and climb the mountains.

AMLO promises to address agrarian conflicts “without being blackmailed by anyone”

Map of crime in Mexico: 12 organizations dispute the territory

Copa Airlines will fly to AIFA from September 26

The Panamanian airline Copa Airlines announced on Friday that, starting on September 26, it will fly