To have a house of their own, buying the first car, getting a professional title and even finding the ideal partner, are part of the great dreams of people who They come to look for the miniatures in the wings at the Cambodromo.

The movement in the place gains strength from 4:00 p.m., when the stalls begin to raise their canvases and the exhibitors begin to accommodate your products with great carein the midst of families, schoolchildren and couples who begin to visit this fair.

As the sun’s rays hide, the little wings begin to shine with colored lights in the Ferris wheels that are installed at different points.

From the seventh to the eighth ring of the Cambodrome, the fair is installed, which has a pre-Hispanic origin in the west of the country. In Santa Cruz they have five decades rereceiving visitors and artisans from all over the country. The show ends today.

This fair opened its doors on Thursday, September 15, in the middle of the celebration act for its golden anniversary. Joy was breathed that mixed with the smell of incense so characteristic of different stalls, where they sell the typical miniature houses for luck.

There are also different animals, such as golden toads, which, according to beliefs, are a good omen for homes where they are taken with faith.

ANDThis time the fair brought together more than 1,700 artisans from La Paz, El Alto, Oruro, Cochabamba and Santa Cruz. The Chambi couple came from the Alteña city to offer houses, cars, passports and tickets, among other miniatures.
“For more than 30 years we have been making handicrafts, which we also sell all year round in our house in El Alto,” says Jorge.

“The cambas welcome us with open arms, that drives us to come back every year”, complements with Francisca, his companion of four decades.

comment qthat their love story began at the July 16 fair in El Alto, when Jorge was 18 years old and Francisca had turned 15. “I saw Francisca selling fabrics with her mother; I tell him it was love at first sight”, recalls Jorge.

“And from then on, every Sunday Jorge would ask about some of the sweaters my mother made, but the scoundrel never bought anything,” says Francisca, laughing. 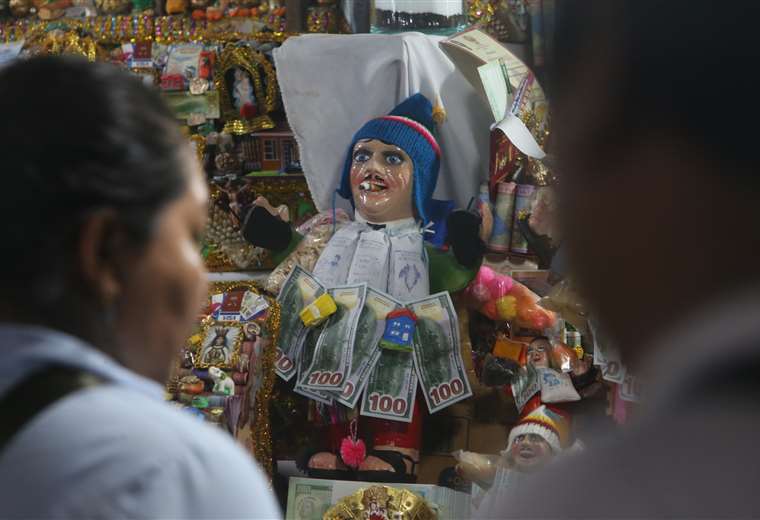 will get marriedn when she turned 18 in a very familiar ceremony. Francisca inherited her mother’s talentor that allows him to market his own creations, while Jorge learned the trade from his grandfather.

Jorge says that for ten years he worked as a laborer, but he injured his back and could no longer lift weights. “My grandfather made handicrafts, it is something that heI carry in the blood. He taught me when I was very young, but it was only after many years that I resumed the practice of his teachings”, he highlights..

‘Neither head nor tail’: Ocampo on Jaime Dussán’s statements

The recent statements by the president of Colpensiones, Jaime Dussán,

Havana Cuba. – From the most rigorous prison El Pitirre,

The deputy director general for the US of the Cuban

This will pay commission for your Afore next year

The Consar rejected the commission proposal presented by Afore Coppel

Opponents see that Evo attacks Arce to remove him from power

The company changeda, but the cleanliness of the city will be the same. Since yesterday there