The Villa El Carmen neighborhood of La Paz experienced moments of tension last Friday morning after several days of upheaval due to the coca conflict. In that area of ​​the city there was still a police presence that guarded the parallel market that was installed by a leadership related to the MAS. In that supply center they denounce that Peruvian coca, from Chapare and the second leaf that comes from Yungas in La Paz are sold. The price in this market is the same as that sold in the Departmental Association of Coca Producers (Adepcoca). 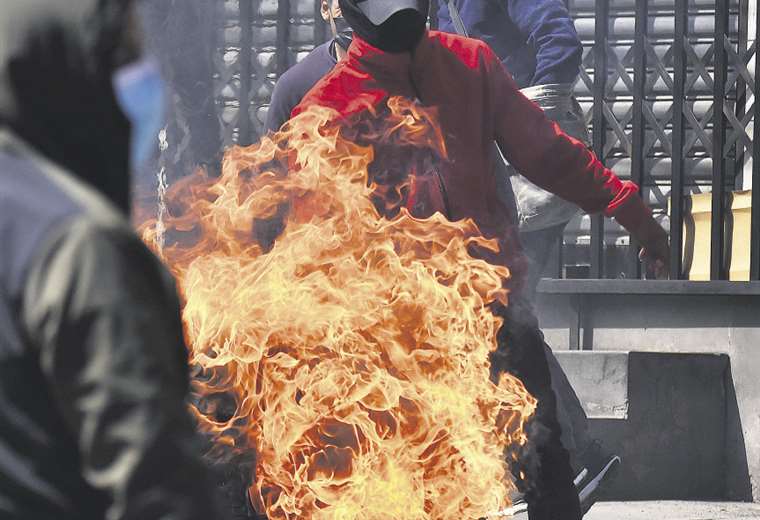 Arnold Alanes is the administrator of the market where it is denounced that there is a sale of second-rate coca and coca from other regions. The leader assured that coca arrives at that supply center from producers who are relegated from Adepcoca and was firm in saying that they will not close the market located on Calle 1 of Villa El Carmen.

Alanes assured that the market he manages receives coca from regions that are “separated” by Adepcoca. “It is legal coca, it is a legal market that is framed in the coca law. Legal coca is sold in the market from producers who find in this space a place where they can sell their products,” he said.

The executive of the Council of Peasant Federations of Los Yungas (Cofecay), Carlos Choque, was the one who denounced that Peruvian coca and coca from red zones are sold in the “illegal market” of coca led by Arnold Alanes.

“It is an illegal market that has coca from red zones and that is what the government is promoting. We receive the original and ancestral coca that has nothing to do with the red zones. In addition, they are bringing Peruvian coca, coca from different sectors and that is why our coca is at a low price,” Choque denounced.

The Cofecay leader explained that the price of coca has dropped so much that it no longer justifies the costs of production and transportation. Choque reported that the lowest price recorded was Bs 10 per pound, when before Bs 35 were paid for the same amount. Currently the pound has a cost of Bs 22 and it is still a loss price.

Alison Spedding, a British anthropologist and philosopher who has lived in Bolivia since 1986, affirmed that coca from Chapare and the second and third leaf that arrives from Yungas are offered on the parallel market. The also writer of several books on coca sees an inclination on the part of the Government towards the Alanes leadership.

“I cannot approach that (parallel) market because they know me. We know that coca from Chapare arrives in that market, second-rate coca from Yungas that they sell at low prices. That removes competition, it’s unfair competition,” said Spedding.

Pando is another region where coca has a high price. The same month, a first-class tank cost Bs 3,250, a second-class tank 3,000 and a third-class tank Bs 2,750. In the other departments, prices range between Bs 1,800 and 2,050 for a first-rate tank. These data were accessed by EL DEBER and were prepared by the General Directorate of Marketing and Industrialization of the Coca Leaf (Digcoin).

The Adepcoca sector denounces that in the parallel market of Alanes there is unfair competition for the trade of the leaf of dubious origin and its low prices. These producers affirmed that they have to comply with requirements and registrations to commercialize coca.

“It is an unfair competition that affects legal producers. We remove the coca leaf from traditional areas and transport it legally to a legal market. That does not happen in the parallel market, where coca arrives from non-traditional areas, from other regions of the country, and they sell it at a cheaper price,” Freddy Machicado, president of Adepcoca, told this outlet.

Meanwhile, the mayor of the city of La Paz, Iván Arias, assured that the parallel coca market in Villa El Carmen, led by Arnold Alanes, does not have a municipal operating license, since it would be a business center.

“I asked my deputy mayor of Periferica if the parallel market that has been opened had permission from the Mayor’s Office of La Paz, because it is like a business center, well, it doesn’t. The only one it has is the one that the Law says (No. 906 General de la Coca), the one from Adepcoca, which is in the area of ​​the Plaza del Maestro”, detailed Mayor Arias.

The leaders of the regional coca growers of Yungas de La Paz identified the Government of Evo Morales as being responsible for the “overproduction” of the coca leaf, as a consequence of the application of Law 906, which legalized the “red” zones of coca production. The plantation.

Thus, the battle of Adepcoca producers is not only with the parallel market, but also with the low prices that exist as a result of the excess of the bush.

Now, compared to May, the producers say that a cup of premium coca can be sold for Bs 800, because in the parallel market the same amount of coca can cost even less.

“It’s second class coca, it’s coca from other regions and they sell it cheap. We have to sell at that same price because otherwise you lose it. So, do you think it’s fair that we sell first-rate coca at third-rate prices? That forces us that illegal market”, Choque questioned.

The ‘illegal’ market sells second-rate coca, it comes from Peru and Chapare

Agência Brasil explains: rules for candidates and parties in the campaign

As of tomorrow (16), candidates, parties and federations are free

At least 187 Cuban rafters arrived in the US this weekend

Madrid Spain.- A total of 187 Cuban rafters were arrested

Córdova Vianello and various councilors will attend meetings of the

Agência Brasil explains: rules for candidates and parties in the campaign

La Paz has 53% of the country’s new Covid cases

“In a skirt and flip-flops, a blouse and a hat, my beautiful little chap, you are a champion”: the joy of a son for his mother’s victory in the Tarija marathon