The HIV/AIDS epidemic, active in the country, with more than 360,000 cases: studies

▲ An ISSSTE beneficiary, during a protest in Insurgentes Norte over the shortage of medicines to control HIV/AIDS, in a file image.Photo Luis Castillo 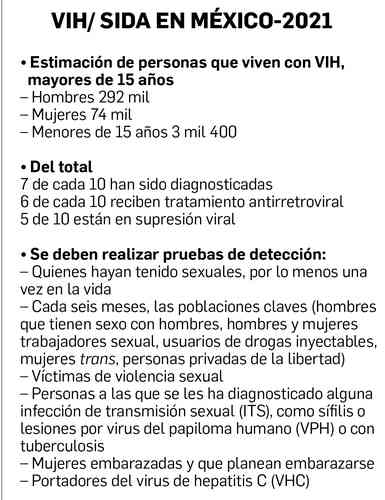 The HIV/AIDS epidemic in Mexico remains active with more than 360,000 people estimated to be living with the infection, as well as significant challenges, since due to covid-19 screening tests were reduced by a third between 2019 and 2021, while the positive results increased, especially in the highest risk groups, indicates information from the National Center for the Prevention and Control of HIV/AIDS (Censida).

Regarding the positivity to the virus, Censida statistics refer that based on the tests that are carried out in the Outpatient Centers for the Prevention and Care of AIDS and Sexually Transmitted Infections (Capasits) and the Comprehensive Hospital Care Services (SAIH), The greatest increase in positive cases was registered among male sex workers, with more than double (from 4.3 to 8.9 percent) and in female sex workers it went from 0.5 to 1.3 percent. The Censida report includes the heading of other medical unitswhere positive screenings rose in men from 1.2 in 2019 to 4.2 percent in 2021.

Regarding the number of new cases of infection per year, professors from the Faculty of Medicine of the National Autonomous University of Mexico (UNAM), made the calculation with the modes of transmission (MOT) method, one of the two proposed by UNAIDS. In an article to be published soon, they state that to estimate the incidence (new infections), this model is better than the Spectrum model –used by Censida–, which has shown some limitations in countries with concentrated epidemics such as Mexico.

Based on MOT, every year 20,000 new cases of HIV/AIDS are registered in the country, while Censida estimates them at around 15,000. The problem, pointed out Carlos Magis, one of the participants in the study, is that the missing cases are not considered, they are not searched for and even less, they are not diagnosed.

Another aspect of the HIV/AIDS epidemic that began in Mexico in 1983 and since then more than 241,000 cases have been confirmed is access to antiretroviral treatment and control of HIV levels in the blood.

Based on official data, of the 360,000 Mexicans estimated to have the infection, 241,200 (67 percent) have the diagnosis. Of these, 147 thousand 132 (61 percent) receive the drugs and from there, those who register undetectable levels of HIV are 79 thousand 451 (54 percent). The goal committed by the countries to eradicate the disease is to reach 2030 with 95 percent of diagnosed cases, 95 percent with access to antiretrovirals and 95 percent with viral suppression.

Challenge, increase the detection of carriers

To achieve the objective of curbing the epidemic, Mexico would have to increase the detection of people with HIV, as an essential first step, Magis said.

One more pending is the transmission of infection from mother to child during pregnancy (perinatal), which should not exist because drugs that prevent it are available. But in 2019 there were 78 and 60 in 2021. Among the causes is the lack of detection. Censida said that 60 percent of the pregnant women in prenatal care underwent the test in the first semester of 2022.

A young man reported missing in Santiago is found dead

A young man who last Saturday had been reported missing

“Panama is a safe place,” says Pino about crime in Panama

It’s official! Vacation reform will come into effect on January 1

After more than five decades without being modified, as of January 1, 2023, the new minimum

#EsClaudia throughout the country Since December 24, spectacular advertisements containing the silhouette of a woman who