Through the Ministry of Energy, the Government made official the new rates for gas and energy services that will be paid by users with higher incomes, that is, those who belong to group 1 in the new rate segmentation.

As reported the executive, increases in rates for this segment of the population will be gradual. In addition, the Government notified that the new rates will also apply to users who have not filled out the RASE (Registry of Access to Energy Subsidies).

The measure of Government was formalized through the Official Gazette published this Tuesday, where it is determined that the new rate charts will be established “by region, taking into account the principle of equity and equality”.

It should be remembered that users with higher incomes, from now on, will pay the full rate for electricity and gas tickets; while citizens with medium and low incomes will maintain State subsidies, as appropriate.

In this sense, according to the tariff update, “users in the province of Tierra del Fuego will have the lowest price of gas per cubic meter, $6.37, and those in the north of Buenos Aires, the highest, $13, 93”, after the first increment. 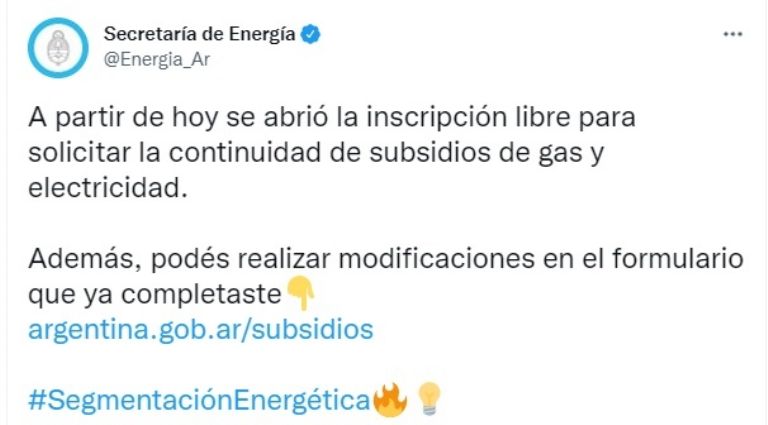 In this way, for the August-October quarter, “an average rate of $7,802 per kilowatt/hour was established for Edenor and $7,832 kWh for Edesur”, which represents an increase of 10.35% and 10 .42% of the levels in force since last May 1, respectively.

The RASE will remain open for all terminations of the DNI

Though the executive released the first increase for the highest income group, also reported that RASE registration will remain open for all DNI terminations.

This, so that users who have not yet completed the form do so, with the aim of maintaining state subsidies; otherwise, they will pay the full rate.

Through the Ministry of Energy, the Government made official the

Government evicts any negotiation with peasants who marched from Santa Cruz

New vehicle sales have a slight drop in July, according to Fenabrave

Sales of new motor vehicles suffered a slight drop in

After having chosen the names that will make up the

Government evicts any negotiation with peasants who marched from Santa Cruz

Photo: Eliana Obregon The first movie show for dogs in South America was held in a

“You have to create more jobs and that requires investment,” Murchison said. The president of the

For the first time in history, two women will lead both chambers of Congress.

(Photo: Deputies Presidency and Press). For the first time in Argentine history, two women are at

A visit that raises tension WATCH VIDEO The Speaker of the United States House of Representatives,

Picketers called for a new mobilization this Tuesday in the City

This Tuesday, in the City of Buenos Aires, a new day of mobilizations called by picketersagainst