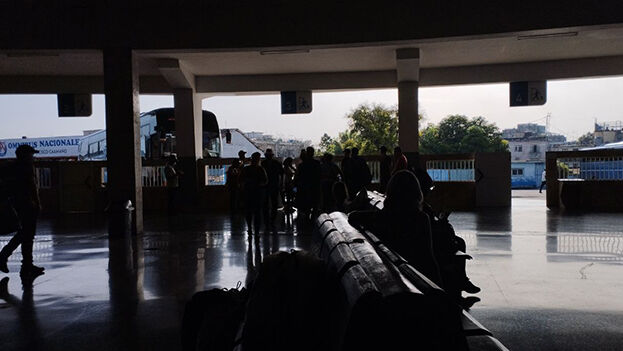 With its halls in the dark, the information screens turned off and an intense heat that the passengers tried to mitigate with fans, this is how the National Central Bus Station in Havana was on Wednesday morning. The scene is repeated throughout the city on a day in which the Electric Union of Cuba (UNE) announced blackouts throughout the island.

“The effects in the daytime will be a maximum of 600 megawatts (MW). For peak hours, an affectation of 377 MW is forecast at the peak, and it is expected that the service will be restored at 03:00 in the morning of tomorrow,” reported the state energy monopoly in a short note.

These reports, which have become frequent as the summer progresses, hardly surprise customers who accumulate the discomfort of long power outages and foresee an even bleaker outlook for the weeks ahead of the hottest months. on the island.

Due to breakdowns, at least eight units of four thermoelectric plants are out of service, and, in addition, one unit of the Máximo Gómez plant is undergoing maintenance, adds the UNE report, one of the entities worst valued by Cubans due to its continuous problems and high electricity rates.

“Better not put it on anymore,” Marian Naranjo angrily ditches in a response to the company’s statement posted on Facebook, adding that they have at least three sleepless nights due to the summer heat in Cuba, which these days exceeds 36 degrees, with a thermal sensation close to 40.

“I went to complain, how could that be possible after so many blackouts? They told me that the cold spends twice as much when they turn off the power”

The summer rains and the lack of fumigation have also multiplied mosquitoes throughout the country, a presence that is aggravated when at dawn you cannot turn on the fan or close the windows to enjoy the air conditioning.

Among the complaints, those of those who lament that the service receipt is not missing, unlike the light, also stand out. “I went to claim, how could that be possible after so many blackouts? They told me that the cold spends twice as much when they remove the current,” wrote Thalia López.

A young man who was waiting this morning to board a bus to the east of the country at Havana’s Central Station not only complained about the darkness that reigned throughout the building but also about the electrical problems that awaited him at his destination. “My family in Holguín already told me that they have a blackout since dawn,” he explained.

He also complained: “I have an ankle problem that I have to put on cold water pads and my uncles made it clear to me that I shouldn’t even get my hopes up that they would be able to have ice, because they had been without power for so many hours that the refrigerator completely defrosted. “.

“It’s a voluntary blackout. There is electricity, but everything is off,” said a woman who was also waiting to embark on a trip to the province. The arrivals and departures of the buses were announced by audio so as not to use the monitors and the air conditioning devices remained off.

The situation of blackouts and lack of electricity worsened after the fire at the Lidio Ramón Pérez Thermoelectric Power Plant, in Felton, located in Holguín, last Saturday that caused severe damage.

In the last days of May, Miguel Díaz-Canel stated that the electricity problems would be solved before the end of June, but not only has this not happened, but the situation has worsened. In June, the president said that it was necessary to wait until the end of July to stabilize the situation. The deadline is running out, once again.

With its halls in the dark, the information screens turned

Bonilla insists on returning to his seat in the Senate; they ask for caution

“It is not honorable to earn a salary if you

They exhorted to ask the Lord to make

Bonilla insists on returning to his seat in the Senate; they ask for caution

Dozens of Cubans have received with relief the news of the arrival of the Perseverance, a

Hundreds and hundreds of people in single file, from one bank to the other of the