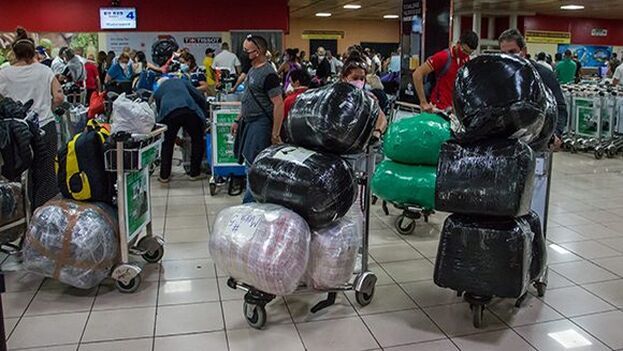 If any citizen of the Island hopes that the “new measures to recover the Cuban economy”, announced with that bombastic title by the Government this Thursdaybe more than words and goodwill, you will be disappointed.

No less than “about 75” provisions, the head of the Ministry of Economy and Planning, Alejandro Gil Fernández, told the National Assembly of People’s Power, that they have taken, destined, collect Cubadebate“to increase foreign exchange earnings and increase and diversify exports”.

Among them, they highlight “the relaxation of imports by natural persons with a non-commercial nature”, that is, whoever buys products abroad and puts them in Cuba will have fewer restrictions.

Thus, they point out, without much detail, “increasing the amount allowed to import some items” such as “cell phones, computers, tablets, tires, rims, among others.” In addition, an increase in the import limit through shipments is announced, from 10 kg to 20 kg; a reduction in the tariff per imported kilo, from 20 dollars to 10 dollars; the exemption of the payment of articles up to 3 kg, and a reduction to 30% of the customs tax (currently it is 100%, recalls the official newspaper).

Gil Fernández advanced, without detailing numbers or dates, that the Government “will restore the foreign exchange market”

Gil Fernández acknowledges that they have received requests to allow imports on a commercial basis, which until now strictly depends on the State, but which, he replied, “is not convenient at the moment.”

The rest of the measures mentioned remain verbs in the infinitive and voluntarism that, for now, do not have much concreteness in acts and, above all, that do not seem aimed at changing the production system. For example: “stimulate the sale of solar panels to both natural and legal persons”, “incorporate the new economic actors, high consumers of the non-state sector, into the analysis of the energy councils”, “increase the production and use of biofuels” and “natural medicine”, “organizing the use of state transport in support of public passenger transport” or “evaluating the relevance of reactivating the movement of microbrigades as an alternative to advance in solving the needs of the population”.

At the same time, reports Latin PressGil Fernández advanced, without detailing numbers or dates, that the Government “will restore the currency exchange market”, at an exchange rate higher than the one officially established so far, of one dollar for 24 pesos, very far from the price at which This currency is handled on the black market, where it has recently reached 118 pesos.

The regime has a history of announcements of numerous economic measures, either insufficient, or not even implemented or brought to fruition. A notable example are the 63 provisions to boost food productionwhich did not even include a petition long demanded by independent peasants: the end of collection.

If any citizen of the Island hopes that the “new

Resimple Mobile Platform of the SET will provide services in Concepción

During the “Formalization Day of the Association of Entrepreneurs of