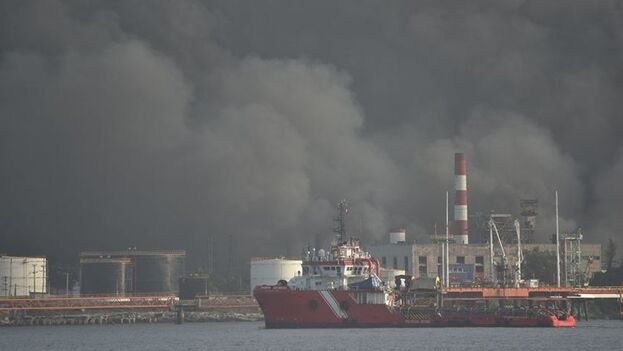 The fire at the Matanzas Supertanker Base, not yet completely extinguished, has had a considerable impact on port activity in that city. Oil tankers regularly moor at its docks, whose cargo is transported to other parts of the island by land or through pipelines.

However, the destruction of 50% of the Supertankers has limited the possibility of storing fuel in Matanzas and has forced to redirect the trajectory of the ships that had their final destination in its port.

This Wednesday the ship was diverted NS Laguna, 249 meters long and 44 meters wide, sailing under the flag of Liberia (Africa) and a cargo of 700,000 barrels of Russian oil. According to the nautical application Vessel Finder, the ship left the port of Ust-Luga, in Russia, on July 26, heading for the Matanzas terminal, where she expected to arrive in mid-August.

The NS Laguna was notified of the change of course and will be diverted to the port of Antilla, in Holguín, with a smaller capacity than Matanzas. It is expected to dock this Saturday at 11:00 p.m. and unload the fuel there.

A similar situation occurred this Wednesday, when two oil tankers with a Cuban flag, which were transporting crude oil from Venezuela to the Island, were diverted by the company Petróleos de Venezuela, SA (PDVSA) to smaller terminals.

the tanker Maria Cristina It sailed from the Venezuelan port of La Cruz, made a brief stop in Havana and had to interrupt its unloading in Matanzas, on whose docks it was during the explosion. She had to go to Santiago de Cuba and deliver the rest of the crude there.

Also the ship Wilma It advanced from the José port, on the Venezuelan coast, to the Antilla terminal. Retained in Venezuela are still the ships Lourdes Y Hopeusual ships of the “oil fleet” between both countries.

The disqualification of the port of Matanzas represents a notable difficulty for the transportation and processing of crude oil on the island. The delay will affect the generation of electricity, one of the most critical problems facing Cuba, where long blackouts have led to popular protests.

According to the maps of Vessel Finderthe only ships anchored in the Matanzas bay are the Mexican Bourbon Artabaze, specialized in firefighting, with technicians and soldiers on board and sent by President Andrés Manuel López Obrador, in addition to the tugboat Hurricane 1with Cuban flag.

The data also reveals that, since the incident, the Cuban tugboat has frequented the Havana port storm 1the tanker Caribbean Allianceunder the Panamanian flag, and the two ships mentioned.

It is to be hoped that the Cuban Government, in order not to interrupt the flow of crude oil that the Island urgently requires from its Venezuelan, Russian, Iranian and other allies, will redirect other ships in the coming weeks and better condition the ports of Havana, Santiago de Cuba and Antilles.

These terminals have proven to be the only ones with the possibility of processing the oil shipments that Matanzas administered before the Supertanker accident.

The fire at the Matanzas Supertanker Base, not yet completely

The Vice President of Paraguay, Hugo Velazquezannounced this Friday that

The representations of Brazil and Argentina before the Organization of

There are currently 19 patients in cardiology (4

The Cuban Conflict Observatory (OCC) has organized the contest What do you know about Gaesa? who

The Cuban Government thanks Spain for sending medical supplies to Matanzas

(EFE).- The Cuban Government thanked Spain this Thursday for the donation of medicines and medical supplies

Early this Thursday morning, the inhabitants of Nuevo Vedado, in Havana, woke up startled by the

Aeroméxico restarts its flights to Havana from October 30

The Aeroméxico airline will restart its flights to Havana, Cuba, from the Mexico City International Airport